Lets see what we've got here... 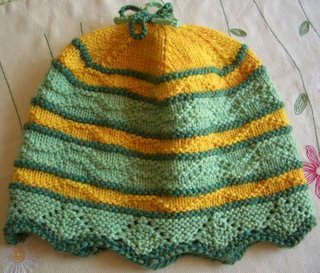 Last winter there were mayby about three hats in our house. We wore them after the first come first serve principle, if we could find them. I didn't knit last winter (other than dishcloths and the occassional socks). This year, there will be hats in abundance and no freezing the ears off or getting a head cold for me, thank you very much! In building up my stash I've purchased some single skeins and hanks of yarn because I've read about them here and there and wanted to know what the fuss is all about. So that's why I had two hanks of Alchemy Lone Star lying around and didn't know what to do with them for a long time, until it hit me and the time was right - to make some hats. 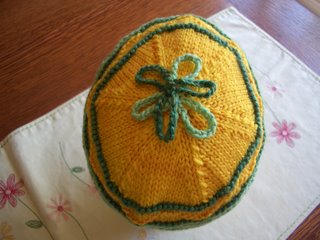 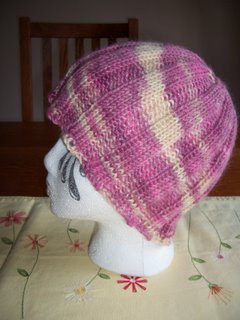 On the right you can see a ripped cap made with Alchemy Lone Star - Rosita. I don't care much for the pooling on this hat. I don't care about pooling when I'm knitting a sock or a scarf, but this does not look nice. But, it feels so soft and that's why it will be worn (maybe while shoveling the snow?). the yarn is 45% merino wool and 55% mohair - that's right. I'm not afraid of mohair any more, at least if it's blended with something else. 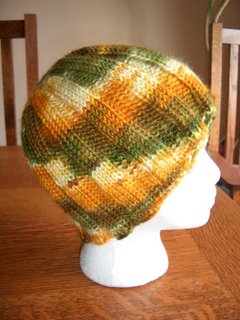 On the left is the same pattern (Ribbed Cap -Vogue Knitting Hats Too) with Alchemy Lone Star - Early Fall. Here the pooling made a spiralling pattern and I like it (not just because there's orange in it, there's green too people ;o)

The first picture shows the "Flower topped striped cap, also from the Vogue Knitting Hats Too book (which I've exchanged for an old Interweave Knitting magazine with Julie) I've got out of the book what I liked and it was lying around anyway. For this one I've used Koigu for the first time. The yellow and green skeins were on sale (guess why). It's Koigu Kersti crepe 100% merino and it gave me a surprise! After washing, the yarn melted like butter in my hands and the hat was at least 1/3 bigger as befores washing. So that's why my model head couldn't show it off properly. I like this pattern; it's interesting and think of the color possiblities! The dark green in between is Gems Topaz (louet) color Russian Sage. This yarn is great to work with. It was fun knitting these hats because they are fast knits -instant gratification- as we say. 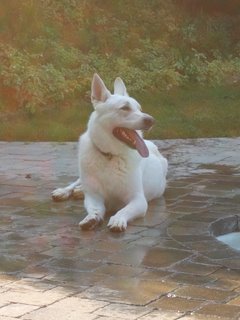 It seems the steaming hot summer days are over. This is as close as Sam gets to the pool. He's lying in a puddle made by Biko after she got out of the pool and shook the water off. Normaly he'll avoid any kind of water but on this day it must have been cooling even for Sam.

I love those hats. So fun and pretty. I might have to knit a few myself.

Thanks for stopping by my blog.

I really love these hats, all of them actually, though I think the first one would be my fave! Lovely!

I love the orange and green hat! They all look great but that is definitely my favorite. I'm knitting hats too!

Thanks again for the inspiration! I have that Vogue Hat book too, but the pictures in the book never inspired me as much as your finished hats do.
So I will be knitting up the ribbed one soon.