The last days I've been working on a commissioned project, which is going very well. It's a felted bag. Haven't made one in a while, so it's fun to do. I'm also writing up the "Her scarf pattern", which takes forever. It's so easy to knit, but writing it up takes so much time. Anyway, this will be finished in a few days. Meanwhile I'm thinking already of other things I'd like to do and am wondering if there will ever be enough hours in a day to do it all.
My welt fantastic socks found a new home. Somebody liked them so much - so I sold them. I'll not be making the same ones again, since I don't have the same yarn anymore and besides there are so many sock patterns out there, calling to be knit, it's unlikely to knit the exact same ones again.
Since there's nothing knitted to show you today, I 'll leave you with a picture of Biko (yes, my second dog-female) this time. She's resting after a vigorous run with her friend Baskin and a swim. See the black and tan dog laying in the shade, while Biko's worshipping the sun? Sam's always hiding in a shady spot somewhere. Have a nice weekend y'all! ;o) 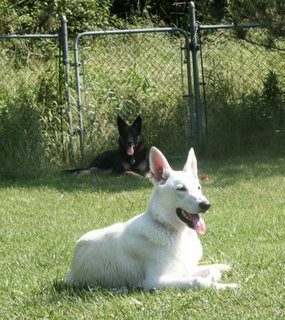 What a perfect picture of contented happiness!

They're so cute! and I think Sam has the right idea.

Translating knitting to words must be a mind twister.