It will only be a break! 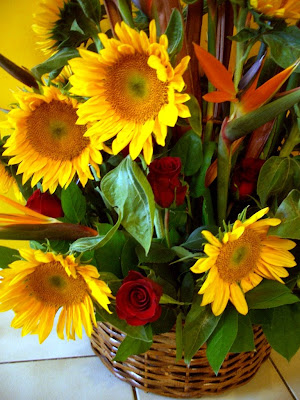 My husband said, I could not leave you like that, and he is right of course. I want to thank you all for your Birthday wishes and comments you left on my last post! They are heartwarming, and very much appreciated!

My decision to take a break from blogging was a right one for me, necessary and important, but I already know that I will be back next year! So, my friends, lets not say goodbye, but rather, see you later! :o)

And apropos nothing, look what I saw in the Supermarket: Disney's new character is a White German Shepherd puppy called BOLT!
He reminded me of Sam. :o) 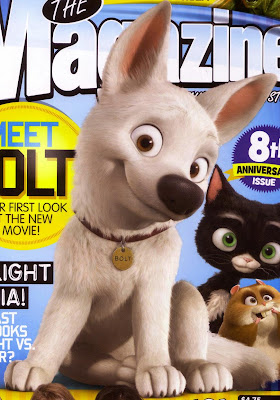 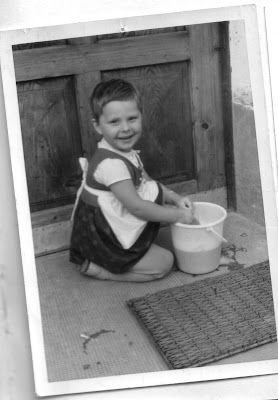 It's my birthday today! I found this picture while looking for another one. I wish I was still that girl, but wise beyond my years, with my life ahead of me, making different decisions at every crossroad of my life. I'm saying Goodbye here for the time being, I don't know yet, when or if I'll be back. But I'm sure we'll meet at ravelry and I'll continue to read your blog posts.
Happy knitting, spinning, and whatever you enjoy doing!

Oh boy, I hope you are still with me! I was only away for a week, and there's so much to show. I can't possibly show it in one or two or three, but more posts. It will come to an end eventually. :o) 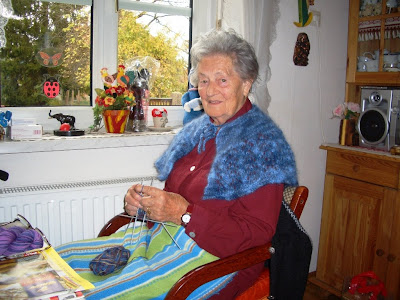 This is my sock knitting grandmother (87). She's wearing a mohair capelet I've knit for her. She's always feeling cold, unless she's got hot flashes. ;o) We both knit a pair of socks during the time I visited. 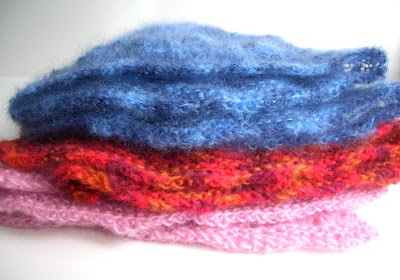 I made three of these capelettes, the pattern is free by Mary Jane Protus, very fun and easy and fast to knit. The top, blue capelet was made with a 90% mohair 10% Polyamide yarn, and was for my grandmother. The other two I made with yarn my mom sent me some time ago, which was the other way around 10% mohair, 90% acrylic. Not my favorite stuff to knit with. My mom kept the redish one, and she'll find someone for the pink one, I'm sure. 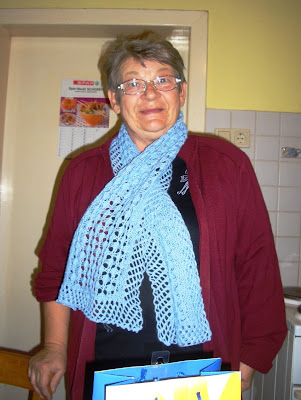 I was surprised to learn that my godmother is a sock knitter too! I haven't seen her in many years. Never knew she's a knitter. I would have brought some sock yarn for her otherwise. I think she liked her scarf. She said, she was gifted with knitting only once before. I'm not sure baby blue is her color though. 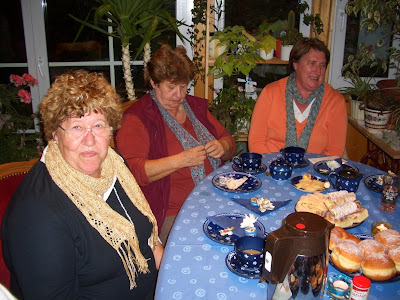 My mother had invited my sister in laws, so they could meet their brother and me. Those ladies have wagging tongues, I tell you. I almost fell of my chair for laughter. They thought I used a knitting machine to knit the scarves, and wondered how one can knit those fine stitches. They are NOT knitters at all. But I think they liked them as well. The forth SIL was there too, but not in the picture. Too bad.
I did not get pictures of all people I gifted with my hand knits, but they all seemed to like their gifts.
Posted by Monika at Monday, November 10, 2008 10 comments: 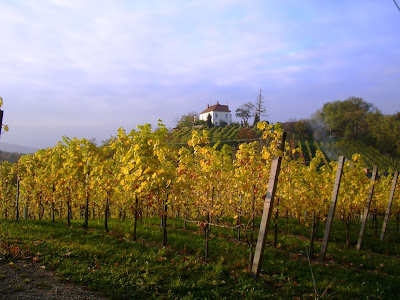 Winery Kieslinger on top of the hill

I arrived in Austria on Wednesday, and Karl picked me up at my parents house Friday afternoon. It was another wonderful sunny day. We had enough time to hike a little. Our first destination was Buschenschank Kieslinger. It's on top of this hill surrounded by vineyards in all directions.

From there we walked to a look-out, which you can just imagine in the next picture. It's a little to the right and up from the group of houses. 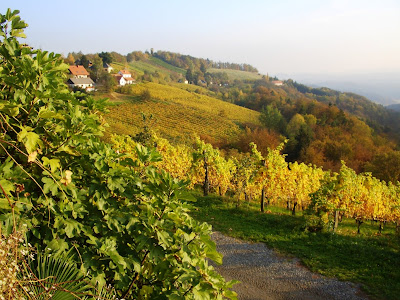 In the next picture you can see the Kieslinger house left far behind us. It was magical to walk there, the sun was already low, the fall colores on the leaves and everywhere around us, just gorgeous! 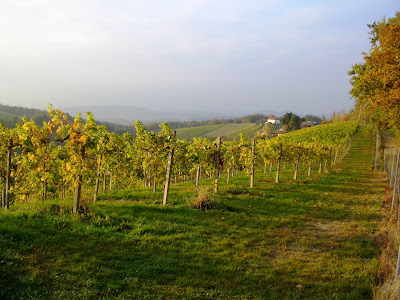 The view in the next picture was like from a fairy tale book. I hope all the pictures are click able, to really enjoy them full. 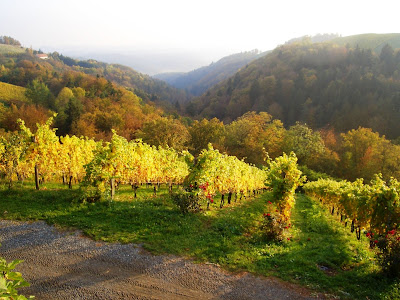 Most of the grapes were already harvested. Only here and there were some left for special wines. I don't drink wine or any other alcohol, but that doesn't mean I can't appreciate the beauty of those lovely country sides, and what they have to offer visually.
From the look-out we walked back to the winery, and had some refreshing elder-blossom juice mixed with sparkling water. That's a divine drink, if you ever have a chance to drink this, you MUST do so! We would have had dinner there too, but my sister had invited us, so we had to drive back to Graz.

We met with my sister and her family, as well as my brother and his girlfriend, and had a nice evening. No pictures though. Sometimes it's just not happening.
Posted by Monika at Friday, November 07, 2008 13 comments:

New books, a ton of inspiration!

Yesterday these fine books, and magazine came into my hands, long awaited, and now I'm going to work through them. From what I've seen so far, there are many projects in them, which I want to make right now, or later. This will keep me busy for a long time.

Knitted lace of Estonia by Nancy Bush. This is a wonderful book. I've preordered it and now I have it, and I'll go and look for some yarn, to start right in on a project. Don't know yet, which one, because there are several I like. 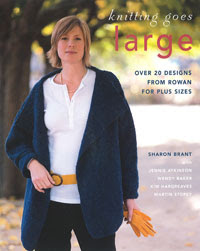 This book I preordered here. The title page picture was an unfortunate choice, but there are several projects in them, which I like very much. The colores, and yarn choices are not always what I would have chosen, but the designs are great. Can't wait to cast on for something from this book as well.

My son brought me home this magazine. Before I left for my trip I got one copy, which I sent off to Germany. This Holiday issue has several nice projects in it as well.
On the other hand, I saw the preview of IK Holiday Issue, and I'm very disappointed. There was only one project I would have liked to make eventually, and it turned out, that it starts with casting on over 900 stitches. Ahem, not exactly what I love to do. So no, this year I'll pass on this one.
Really, I'm off reading my new books, and trying to decide what I will be casting on first. Tough decision! :o) 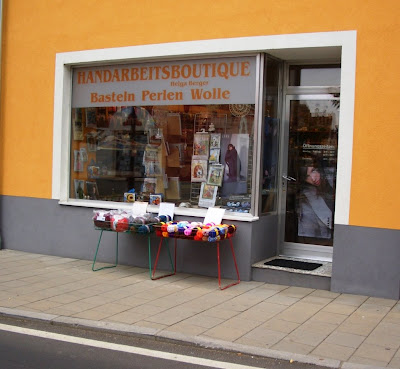 I realize this is a knitting blog, but not much knitting has been going on during my trip, or since my return back home.

This trip was very important to me, since my life has become narrow, confined, cut off from the rest of the world. I discovered that there IS a world outside the knitting world, where people have no clue, nor interest in knitting or any other fiber activity, even the only yarn shop owner in the small town of Fuerstenfeld, where I stayed with my parents, knew nothing about knitting blogs or Ravelry. I tried to explain to her, but in the end she just called me weird in my face, which had me stumped, but I had to laugh too. Poor woman, she doesn't know what she's missing. Her store is a one room store, with one half stuffed with yarn, the other half was reserved for all kinds of needle point stuff and other. She did not have a single Knitting magazine, except some from Lang Yarn, which she was selling. I was only interested in sock yarn, but there was not much to choose from. I was looking for Regia Silk, which she didn't have. I still managed to buy a few balls of self patterning sock yarn, because I liked the happy colors. And there were new Hundertwasser sock yarn colorways I liked too. I was surprised to find, that she did not have Steinbach cotton thread at all! I was so sure I would find it there, since it's an Austrian company, but no luck there. I did not want to leave without any cotton thread, still thinking of knitting Franklin's 1840 Nightcap. I choose a different brand, in these colorways. Not all are meant for Nightcaps, but for lace shawls as well.
Out front there was some sock yarn on SALE. I took one ball of 6-fach sock yarn and knit a pair of socks on 3mm needles for my son. I just managed to finish them on time. They were meant for bed socks, and he wore them before I could take a picture, so you get a picture of worn socks! :o) 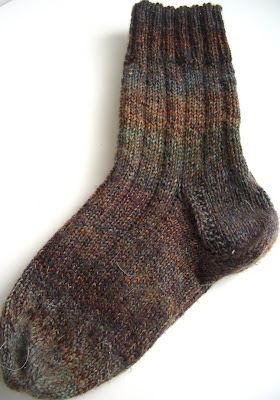 By the way, I took some lace knitting with me to the airport. I started to knit a shawl while waiting for the flight. I had no problems whatsoever with security, but since it was a night time flight, I did not knit on the plane at all. I think I'll rip what I have so far, but it was good to have, to keep me occupied while waiting. 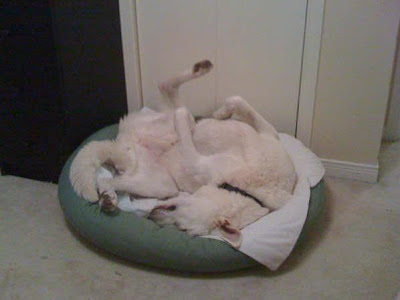 You'd like to know if Sam missed me? This is him, sleeping in David's bedroom, in the middle of the night, taken with his cell phone. Want to see another one? Same dog, different night. He slept like that each night. 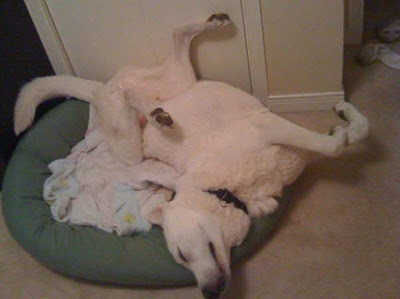 ... sometimes Biko got to use the bed as well. When I returned Sam ignored me until the next day. He's so funny. 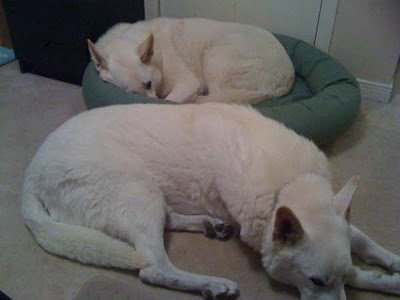 I had some trouble getting back, my soul must have taken a different plane home than I did, but now I think it caught up with me again. This trip was booked with two purposes in mind. To make a long overdue visit to see my parents and grandmother, and to resolve, if possible some other issues.

Of course as you all know, every trip is too short, and so was this one. I flew from Toronto to Vienna, and from Vienna to Graz. I arrived very tired, but excited at around lunch time. My DH Karl picked me up and since it was a warm, sunny day, we went straight Downtown Graz to have lunch, and walk around to reconnect with so many old memories, and sights. I have to admit, we took the elevator up the Schlossberg, because I could not face the many steps leading up to it, I was too tired. The Schlossberg is 475m high, and we had a wonderful view in all directions. I could easily stay in Graz for a week and not get bored at all. I'm sorry that I was too early for the Advent markets, but I got to see the "Maroni Brater";

they grill Chestnuts on the streets; the smell is divine, and the taste wonderful.
I did not take any pictures during the first few hours after my arrival, I didn't think straight, was too tired and wanted just to enjoy being there.
In any case, Graz was not my final destination, and we had to drive another hour to get to my parents house. There, a big WELCOME sign awaited me, with my parents and grandmother in front of it! It really had been too long. 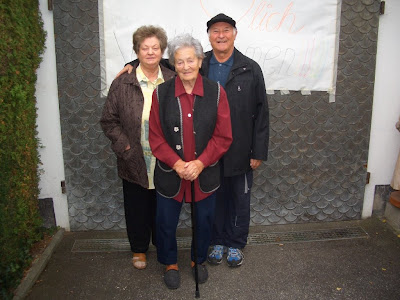