Sometimes things just happen. We didn't even think we'd want a puppy so soon! On the other hand, I had TWO boys, who were sad, and depressed, and when I saw a picture of this little guy, I had to show it to my son. 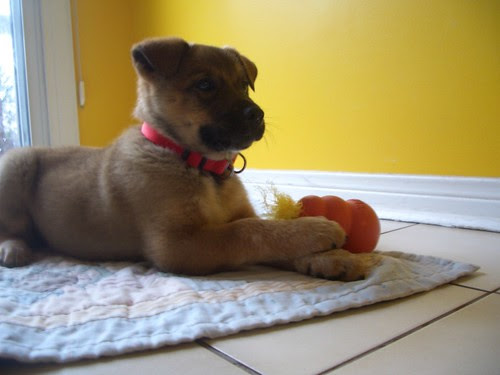 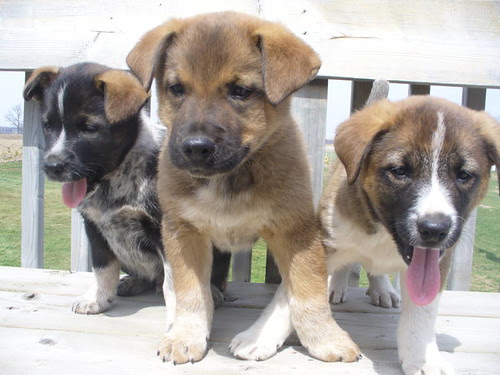 Here he is in the middle, with his two brothers. We met the one on the left, when we went to pick him up. And here are his three sisters. There was one little sister left. 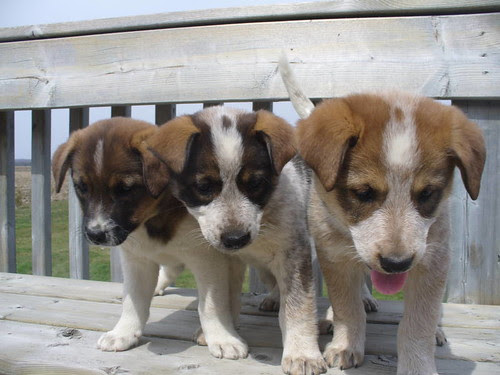 When we got there, there were three puppies left. We had picked Denny, so he was on hold for us, good thing too, because he was the one others wanted to pick too.
They are Shepherd x (mom) and Blue Heeler x (dad) pups. I've learned since then the a Blue Heeler is an Australian Cattle Dog. I've read what Wikipedia had to say about them, and you just got to read about their temperament. On the second day, we already knew that he's a smart cookie, and now we have it in print too! And he's just part ACD, Shepherds are no dummies either! :o)
On our ride home, I was sitting in the back with him and Happy. The first five minutes he played with me, very sociable, not scared AT ALL. Then he slept all the way home (2 1/2 hour car ride), just to wake once, vomit, and go back to sleep. Nice. :o) 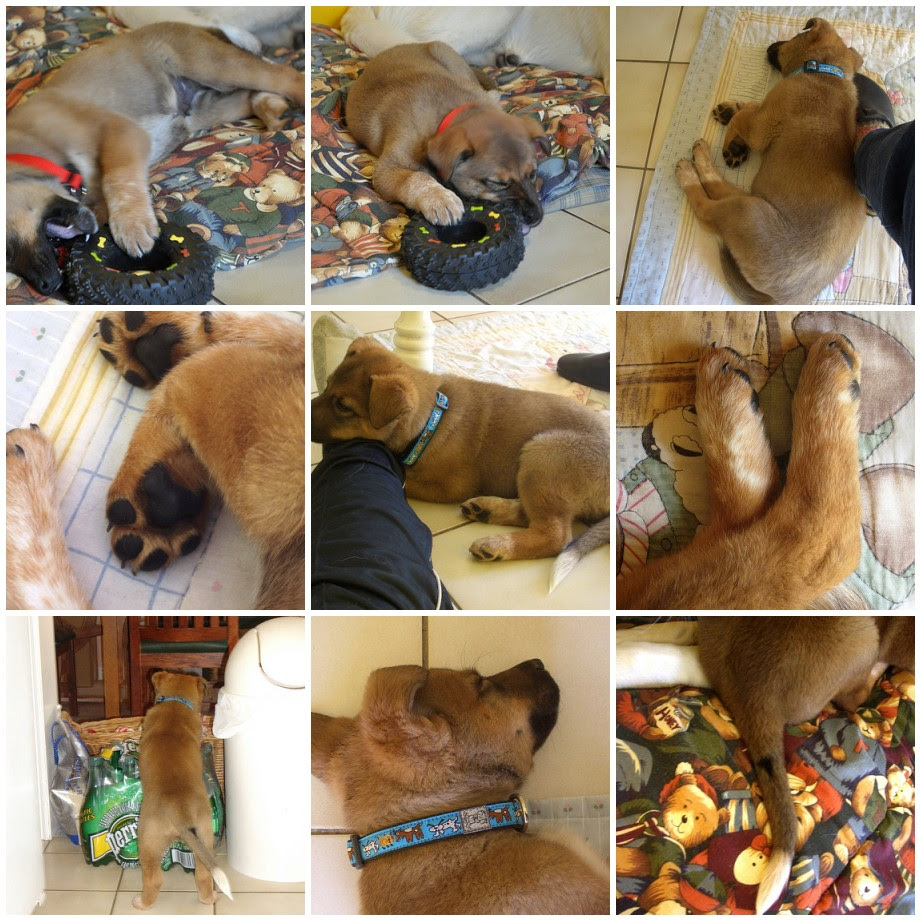 We got him last Thursday, and he was 6 1/2 weeks old. The same age as Happy was when we picked him up, but Denny's already much bigger. Oy! We've already made hundreds of photos, but only a few are NOT blurry. Besides he charges the camera, when I'm alone with him, with nobody to distract him, and he's always moving!
He's very much my sons pup, and I'm so VERY glad that they bonded so quickly!

So, what is Happy saying about all this? 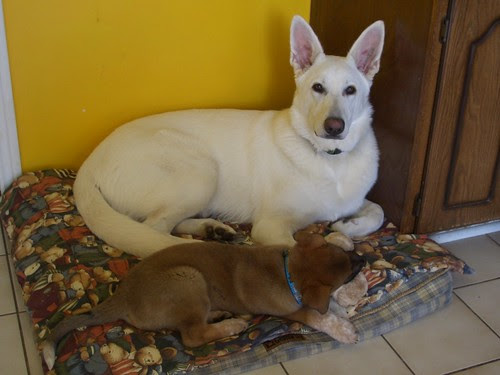 He thinks it's the best toy EVER, we brought home for him. They are already best buddies, but I feel sorry for him, because it's clear, that he's the soft one, and Denny will be boss. Right now only Happy's size and strength let him be the winner. Poor, Baby, if you knew...

He's beautiful Monika, he looks like a ball of fire.

Once again, the tears are rolling down my cheeks. I am so happy for all of you. Denny is adorable! Happy seems to like him, and I know our son will cherish him. Wonderful, just wonderful!!! Can't wait to watch him grow and thrive in such a loving home.

YaY!!! I'm so happy for all of you. He is of course gorgeous, can't wait to watch him grow. I knew Happy would respond well, he seems like the kind of dog who is happy to have anyone to play with.
Happy playtime :)

Friends of ours have an Australian cattle dog (rescued several months ago) whom we met last Sunday and she is amazing. I can see where this cross would make a perfect dog.

I don't envy you the chewing months, but it's a small price to pay for years of laughter.

What a handsome pair!

Congratulations!!!And what a GREAT name- perfect fit for him!

Denny is adorable! I love those paws and his collar is so cute. I'm sure that Happy doesn't really mind getting bossed around since he has a new friend now. I'm sure they'll be happily digging holes in the yard together soon.

He's so adorable! I'm so happy for you. It was very clear that you all needed another dog, and it's just great that Happy has taken so readily to Denny and vice versa. Not to mention the human-to-puppy bonding! I hope all continues to go rally well for all of you.

Hi Monika!
What a lovely puppy! I wish you all the best!
Jú

Hey welcome Denny!!!! So weird that is not white hahahaha Love those paws, and the little black spot.

I cant wait to see videos of him interacting with Happy

Congratulations! He is so precious! Love his tail and look at the size of those feet! I wish you all the best with the new puppy, there is no better cure for a sad heart then slurpy puppy love!

Isn't he sweet! I knew Happy would take to another puppy quickly. :)

Squeeeeeeeeeeeeee! His adorable! And happy looks like such a handsome young man - the puppyness is gone!

He is so cute! Congratulations!

So much cuteness in one blog post! I love the photos of the puppy paws the best. Good luck keeping up with Denny and Happy with all their puppy energy!

OMG! I have SOOOO been looking forward to just such a post! That tease was way to much!! So happy for you all. He is just adorable, and Happy looks so "big brotherly!". I look forward to hearing all about the trials and tribulations he brings into your life....(not to mention all the JOY!)

What a cutie! And with that mix you'll need to be on your toes: two very smart breeds!

Congrats to all of you! I'm looking forward to seeing him grow up with Happy.

cute overload. can't wait to hear of their adventures together...

I'm so happy for you all. And Happy will be perfectly happy once all the hierarchy is sorted.....

awww, so cute! the pictures with the siblings are just too much. congratulations!

Denny is adorable - I'm glad that you are all so happy! Congrats on your new addition...

Clearly, Happy is going to be a great big brother! It's adorable how they nap together on the pillow!

Happy looks gigantic, Denny like such a peanut. Adorable!

Oh My - Denny is super cute but won't stay that way for long - he will grow into a big bouncing ball of ADHD - a perfect toy for Happy.

Oh, my gosh! What a handsome pup! I'm glad Denny found himself a home with a boy to love and another puppy to play with.

Will keep an eye on his progress. Looking forward to more photos of the entire gang.

Congratulations on the arrival of Denny!! He is so cute and what a great name. He will be an excellent dog as he is part Aussie!!! He makes Happy look like a regal grown up dog. I am so glad they get on and Happy likes his new 'toy'. Happy might grow into his Big Dog role, Peri was tentative at first and too soft, but now she is definitely in charge of Lorelai Gilmore!! Big hugs and tummy rubs all round!!!

Denny is a beauty and will, as you have already noticed, be very very smart. Our neighbor has two Blue Heelers!

Very happy for all of you :D

Denny is way too cute! Congratulations on your new family member.

I'm so, so glad you've got this little bundle. He is truly adorable! Very glad for Happy too!

So happy for you guys! He's adorable!

He is adorable - very excited for you. We have an Australian cattle dog mix as well - you are in for many challenges but also a lot of fun!

First off I can't believe you got Happy clean from the other days outdoor digging episode. Those two boys look they'll be buddies for sure! It's hard to believe that Happy was that small not too long ago. Congratulations on getting Denny (he's so cute) and we look forward to seeing many more photo's of the two of them playing.

your new puppy REALLY looks like a Denny (Crane) So wonderful for you and your family. Oh the joys of house training! GOOD luck with all of that.... Happy looks like he is excepting the new arrival well.... Hugs, Kim

Ou I feel so sorry and have tears in my eyes. I havent read You pages for a while.
But Biko is there where my Bertha is, I hope they be friends.

And what a lovely Denny! So cute!

You're opening sentence sums it up perfectly about things happening. Obviously the time was right, though may you never would have suspected that it would happen this way.

Oh, he's so adorable! Congratulations on the addition to your family.

OMG - I'm off the computer for 2 days and I come back to a new puppy!!! I'm so excited for you :-)
My close friends and next door neighbors in AK had a Blue Heeler (named "Blue")who was the nicest pup in the world. And of course Shepherds are wonderful too, so you have a winner!!
Congratulations!

Oh my, he is so cute. My friends have a ACD and she is the SMARTEST DOG I have ever met. :) Happy looks very ... happy!

Deny is so darling. Congratulations.

Denny is a handsome puppy. I'm sure you'll have much fun ahead.

Congratulations!!! What a lovely puppy!

My dog looks just like Denny! They told me Boxer/Blue Heeler when I got her, and her "sister" looks like a blue heeler, and we always thought it was impossible that they were actually siblings. Amazing! Maybe Denny will look just like my dog, Gansey!