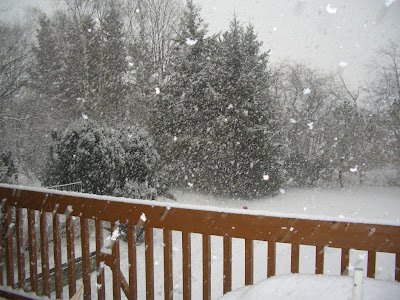 This morning this fantastic sight presented itself to me. Did I mention that I love snow? Well, it was coming down hard, in big, fat snow flakes. The camera was even able to catch a few of the big ones, and you can see the crystals! Naturally I had to get right in the middle of it, and so did the dogs. 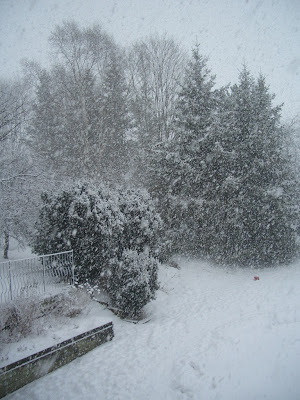 Lovely! (as long as you can sip your tea and don't have to go anywhere, of course) 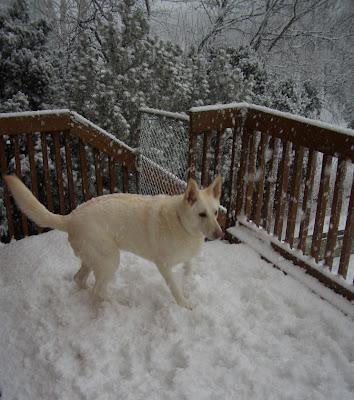 Biko has Sam in her sights, and is about to chase him around the balcony. I promise pictures of Sam the next time. I've got some lovely ones. But it was brought to my attention, that I don't take enough pictures of Biko. (maybe because she's not around me as much) ;o)
The picture below was taken a couple of days ago. It was a gorgeous day, but cold. 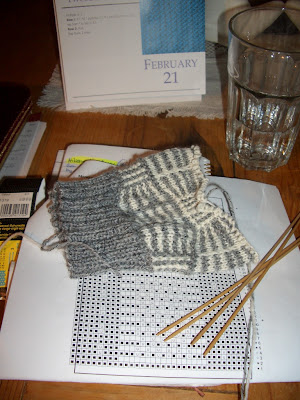 I thought I show/tell you about some of my failures and my latest project. I've been knitting on this slip stitch sock for a couple of days, until I gave in and acknowledged, that it was not going to happen. It's a wonderful pattern, but the slip stitch pattern was getting on my nerves, and the thought of having to make another one, was too frustrating. Also, they were meant to be for Hannah. She's got a narrow foot, and with the 68 sts it was to wide even for my big foot. So after some soul serching, I decided to frog it. There was no resistance coming from my knitting self. More like a sigh of relieve. I don't understand it, because I wanted to knit these socks for quite some time now. Oh well. ;o)
I started something other instead.
This poor grey thing, might not look like much, but I even found a name for it : "Ashes" will be my next sock (pattern?). Of course, depending I like the end result and it fits Hannah's foot, which we'll know in a few days. I've turned the heel, and am on the foot part already, but it's still sock # 1. I couldn't get a better shot, because after this picture, the batteries died. Reloading as we speak. 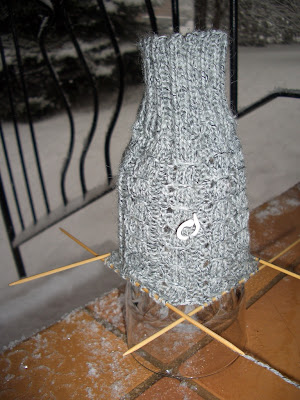 If it weren't for socks, I wouldn't have to show you anything. I've been knitting on my Noro blanket, and there's nothing really to show, since it looks the same, just with a few more rows.
I made a few more squares for the magic mosaic blanket as well and will tell you about it in another post.
I've been knitting on my Tofutsies sock. Let me tell you. I've started three times, each time with different stitch patterns, but nothing was really right. I ripped it all out and put the yarn away. I didn't like the color from the beginning, and after giving me such a hard time, I don't want to knit with it right now. But I think I figured out why it didn't work for me. I used 2.5mm needles, and the knitted fabric was too loose for my taste. The next time I'll use smaller needles. I DID like the feel of it , however, even though the easy splitting was very irritating. And another thing, I've used bamboo needles. I think I'll use metal ones the next time. The bamboo's were too "sticky".
I've got a couple of pictures of Smoking Hot Socks, which readers made. I've put up one picture in my Readers Gallery, the second one, will follow soon. It's fantastic how they look, with all the different yarns and colors!
Posted by Monika at Thursday, February 22, 2007

Even though you have had trouble with both socks...they look pretty good from here. I love seeing your socks... hopefully soon I'll be able to give socks another try :)
My middle son has the flu and now we are trying to keep the youngest (and me)from coming down with it...he'll get a flu shot tomorrow! My husband is the only one who got the flu shot already. Always something!
Stay well and happy knitting:)

But you show very pretty socks and I'm sure they come in handy in your beautiful winter wonderland.

Well I think the socks look great form this side of things! I tell you, seeing all that fluffy snow makes me wish we had some here!

it looks so nice out. gorgeous snow.

love the sock you're working on. the pattern looks fab!

Enjoy your snow day. We don't get snow days down here. Occasionally their are hurricane days. I don't think they are as fun as a snow day would be.

Gorgeous snow pictures! You're so lucky! The snow here in NYC is basically grey slush you try not to step in while crossing the street. Sorry about your slip stitch sock, but the "ashes" is looking fantastic. Can't wait to see the complete pair!