Back in November 2006 I bought Simply Knitting magazine, issue 21, only because there was a small picture on the cover with this cute little hedgehog fella, called Hibernating Harry. Since I just made (h)adorable Hermann, I knew right away, that I wanted to make Harry as well. Well, times goes by so quickly, but finally I did it. 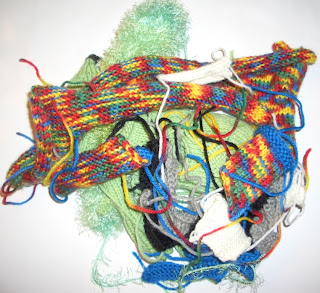 The designer, Alan Dart, promised hours of knitting pleasure, but forgot to mention hours of sewing (pleasure?). No wonder! Make something out of this pile of knit pieces and all those ends.

I made a huge mistake in assembling Harry. Because I didn't come to this project with an open mind. I made Hermann, and thought this one had to be constructed in a similar way. Hence the mistake. You see, his fuzzy back was not supposed to be sewed on, like I did in this picture, and then stuffed. It was supposed to be sewed on later, after the body was done!!! Didn't read the fine print, and didn't take my own advise, to read through the whole pattern before I started. Well, that's one reason my little Harry is on the bald side, and he's fat! 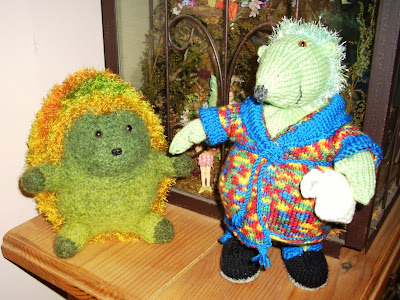 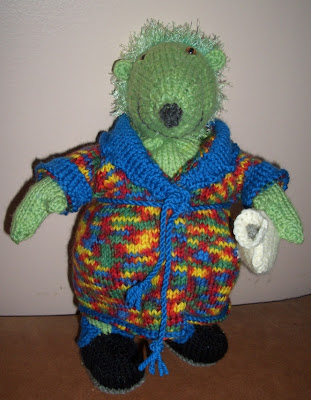 As soon as I realized my mistake, I lost all drive to finish him, but Hannah said, Harry is cute, and I should finish and love him. He has his own charm, with his lop-sides head and his drunken stance, but with a winning smile, don't you think? And he can stand on his own! It was a delicate balance to give him legs and as you can see above, with no arms, he had that balance. After he got his dressing gown, the balance was somewhat off, hence the dorky pose.
Somehow he reminds me more of a Kiwi bird, then a hedgehog, but that's O.K. I'm not a doll making expert, and never will be. At first I thought I'll make another one, this time correct, but I don't feel like sewing tiny pieces together, right now. And one other thing, better not spoken off too loud, because there was a fatality in the making of Hibernating Harry. Ever wonder where he's got his eyes from? ;o)
I hope I don't come down with something. I sure could use a hot water bottle right now and a cuppa tea!
P.S. Hannah also suggested making him a wig. ;o)
Posted by Monika at Monday, February 12, 2007

So cute! My pup would be trying to claim that as a chew toy.

They are so cute. I saw one hedgie knit like the one on the left in hot neon colors! Both are fun. Great job!

Oh my - Harry is so cute - I LOVE his bath robe and is that a teeny hot water bottle he's holding??? If you hadn't said anything - no one would have known about Harry's little problems!

Harry is adorable! He has his own personality. I think you did a great job on him because he has his own special appeal.
Punkin

Harry is darling! They both rae, really. I do like the bath robe quite a bit. :)

Awww...what a cutie. Toys are so fiddly to knit, but the finished item is worth it.

Even though he is fat and balding we still love him :). Very cute.

Harry is a hunk! Drunk looking and everything!

Very cute...I give you lots of credit for following through and finishing him...I would be turned off by all that sewing. He turned out just great!

Too cute!! You look like an expert to me.

Oh my! Those guys are just so cute! I wish I had the patience to knit up so many little pieces and put them together. You did great!