"Sam and Biko howling at the stars" Hat 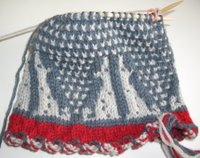 Well, there you go. I've promised you a hat! At first I thought it would be "Sam's hat", but seeing that there are two howling "dogs" facing each other, I had to think about that for a minute. 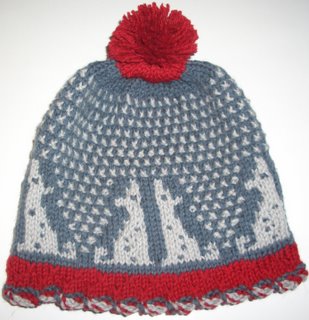 It did take me one day to make it and it was so much fun. For those of you who would like to make a similar hat, you should go and get yourself the "Slip-Stitch Knitting" Color Pattern The Easy Way book by Roxana Bartlett. I've got it used on Amazon.com There is a hat in there, which is called "Reindeer in the snow hat" and it's just too cute. After seeing it, I slept on it and was thinking of making something like it, but not quite the same. They use an invisible cast-on and sew the hem up after, which is one thing I'd like to avoid, as you all know! ;o) I made the "LatvianTwist". I found a tutorial for this on Carolyn's blog. Thank god for pictures! She used it for a pair of socks, but it works here as well. 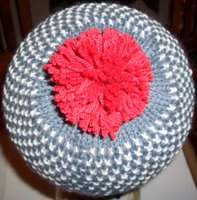 Oh, and I made my first Pom-Pom. It's rather ratty looking, but it's O.K. The hat fits my head, just. Because of the slip-stitch it holds together well, but it gives more warmth too. 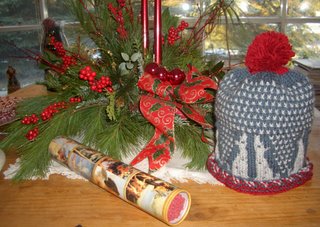 For yarn I've used Knit Picks Wool of the Andes (100% Peruvian Wool) in the colors cranberry - fog - mist and it's knit on 4.5mm needles. 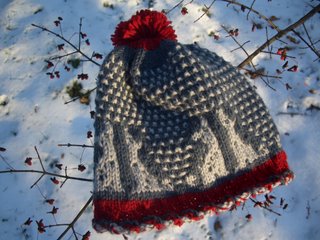 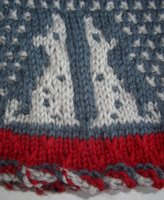 David couldn't see the howling dogs at first, but here they are. I could have made any other design, but I didn't want to. I like dogs, why should I put a Reindeer on it? Or flowers? Or cats? You know what I mean. 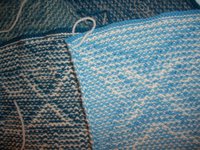 Heike wanted to see what the Magic Mosaic squares looked like on the back side. 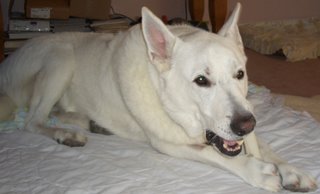 Sam is doing well. He's alert and even playful from time to time. He's chewing on the nylabone, because he's bored out of his mind. Recovery is slow, but steady.

I came to look at the scarf again and saw this hat (your post hadn't even showed up on bloglines yet!)You are a knitting genius! I LOVE it.....so so wonderful with the howling pups and the beautiful Latvian Twist edge and oh the colors!
I just put a request in at the library for the Roxanna Bartlett book (I like to check it out free 1st before I buy it)

What a great hat! I love the way you designed it with the pups and the colors too.
Oh and thanks for the link to the Latvian Twist technique.
I've got to try than on my next hat.

I love the blue-grey with the red. The hat's a great success. I too will have to see if my library has the book.
Gillian

Love the new hat and the colorsa are great!

Yes, the hat is just adorable! I may just have to go get that pattern myself.

Your hat is stunning! I love the howling dogs. I'm amazed that you could knit this in a day.

Your new hat is fabulous! I love it. Never heard of the "The Latvian Twist Cuff"...very nice and a different look... now something else to try :)

fabulous hat. too cute. you're such a fast knitter. so inspiring.

The hat is so wonderful! I love the red contrast and the dogs.

Get well soon Sam! Please give him a kiss for me.

I totally LOVE this hat!!! It's absolutely fun and inspiring! The pom-pom is great too!

I'd like to know where you found the Howling Dogs graph. I know I have seen it in one of my books or on the net. Need to knit my grandson a hat with their school mascot.