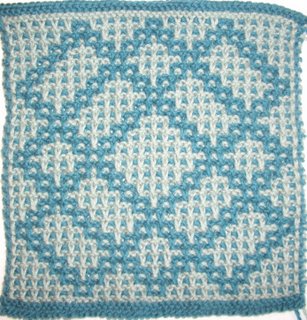 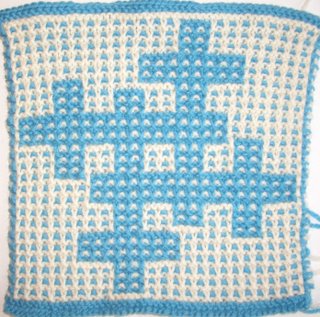 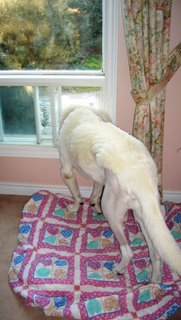 Sam's like a bulldozer, sticking his head out through the screen. That's as close to nature as he gets right now, unless you count pee breaks. We went to the vet's today and he was very pleased and impressed, of his recovery. Dr. Doug took out the stitches, while David and I were keeping Sam still. All the while Sam was "singing" a ballad of his never ending ordeal. After we came home Sam fell asleep with his tongue sticking out. He was totally exhausted. It will be another couple of weeks until Sam's allowed to go for walks, but that's okay now. He's resigned himself to the fact, that that's his life right now. He's calmed down, snoozes and dozes, all day long. At least we are back to our normal sleeping routine! Yeah! We've devised a two towel transportation device, with David at the rear and me in front. The first two times, Sam was struggling and wiggling so hard, that he banged his head into the wall. Now we've learned to deal with this wiggle monster and we have to get him down the stairs only once a day. So, no broken necks so far. 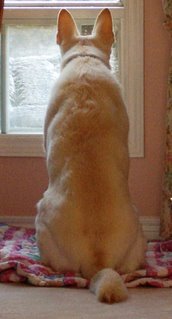 That's how a good dog behaves in front of an open window! Biko is showing off here. Although she's looking quite calm, she was barking her head off. A pity the pictures don't come with sound effects! Or should I say "Thank God!" ;o)

I love your doggie updates and glad that Sam is recovering so well. We have a 7 year old white german shepard. His name is Timber and he is my baby. We also have a beagle and a Boxer but Timber is the best dog we have ever had!

Your babies are so sweet!! Happy to report Wolfie is fully recovered from the tooth pull and is back to his cuddly, snuggly, barking ways. We are sure thinking of Sam, and Biko, too.
Sue J.

Please give Sam a kiss from Peaches. I'm sure he'd love to be kissed by a 13 lb rabbit, right? LOL

Cute doggies, the last picture looks like something very interesting is going on outside.

Oh, poor Sam! I can so well imagine how much he misses being out and about these days! But it can't be helped, and these days will pass too, then he'll be ready to roam the great outdoors again! I'm so glad that his recovery is going well - a big hug to him from me!

Glad Sam is somewhat adjusting to his fate. Those squares are so pretty...I'm very interested in seeing the finished blanket!
happy knitting :)