Another nail in my coffin! 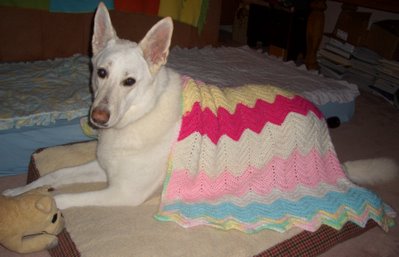 Sometimes I doubt the sanity of our dogs, especially Biko's. I was munching away on my dinner, when I heard David yell outside. He was playing with Biko, it was almost dark already.
I jumped up and ran outside, already knowing what has happened (because I thought to myself today, I wonder how long it will take Biko to jump into the pool), only to have my suspicion confirmed. She was standing in the pool like a captain on his ship (and here is a big THANK YOU to the pool guys, who managed to put the cover on oh so firmly this time!).
David was yelling at her and she was just watching him, freaking out. He got her moving, when he put the pool net behind her behind. It looked so easy to get her out, but I swear, one day she'll give me a heart attack! This was not the first time she did this. But the other time was in spring, equally cold though. She acts cool as a cucumber now, while we are still high on adrenalin.
Posted by Monika at Sunday, December 03, 2006

Hard to recover from a scare like that. Glad everything turned out ok. :)
Now you need to knit to relax ;)

Whew! Four legged children can cause grey hair too! So glad that scare had a good ending!!
Samson, Gabi and Sasha send snowy hugs from Oklahoma.

My gosh, what a scare - this will definitely linger on for a while! Let's hope the little one won't do this again! But how absolutely cool she looks on the pic! ;)