I had this post ready as a draft, before I took a break. I was debating with myself, wether to delete it or just show it. I liked the pictures so much, that I thought I'd show it after all.


Almost there, really! I have so many photos I like, each has it's own charm. I have to decide how to present them, so I thought today's post is dedicated to the animals we encountered. There were not many, but interesting ones. DH and I took turns taking pictures, but the animals were all mine. :o) I would recommend to click for big if possible, I think it's worth it. 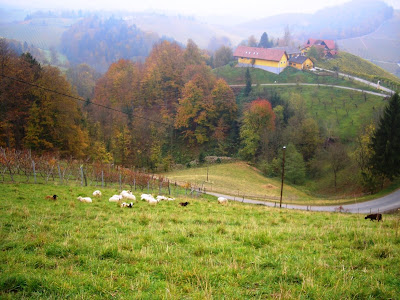 This picture is one of my favorites. It's indicative of how the countryside in southern Styria looks like; very hilly with vineyards up and down, houses on top of the hills. It was wonderful standing there, taking it all in. I grew up in the eastern part of Styria, it's similar, but not quite so many vineyards, and maybe slightly less hilly. 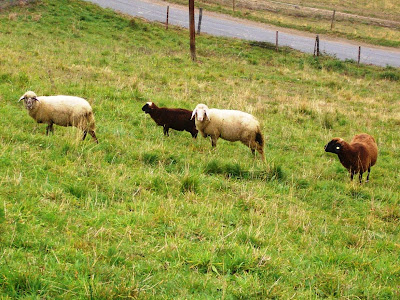 I had to zoom in on those critters, because there was an electric fence, I would have jumped another one, but not an electric one. :o) 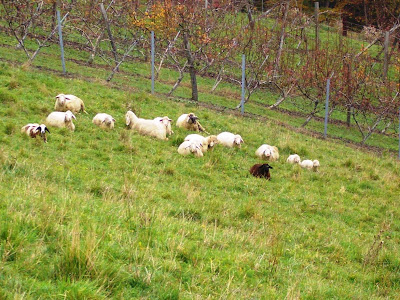 At least they did not ignore me. Poor buggers are not bred for wool, but for meat. 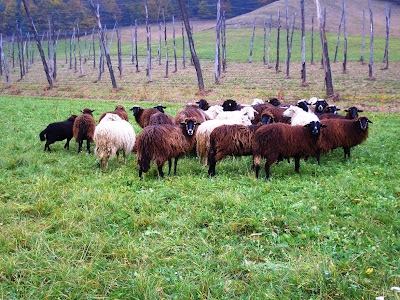 We were driving along, heads swirling to get it all in, when I saw this herd, yelled sheep, and DH jumped on the breaks. I was out the car so fast, I was glad that I didn't scare them away. They seemed to be equally interested in me, as I was in them. What else is interesting here are the wooden poles in the background. They are used to support hops for beer. Harvest was long over. 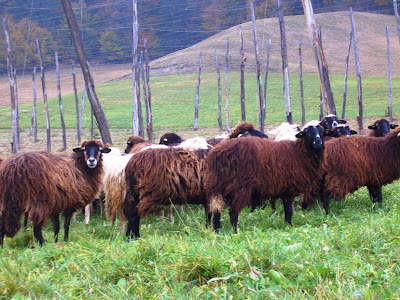 On we went, this was on Saturday, when we were driving the "suedsteirische Weinstrasse", meaning "south styrian vine road". It's something to be seen. We did not have great weather, it was overcast all day, just not raining, which was good. I didn't mind though, I still enjoyed it.
So we were driving along, when I glimpsed these brown beauties. I had to get close to get some pictures, but I had healthy respect for those horns. The calf was just too cute! 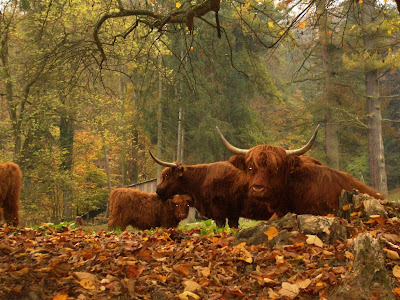 That's Highland cattle, which supposedly produces leaner meat, and can withstand cold much better. I like the long coat they have, they look so cuddly.
The big bull looked at me, but didn't think I was worth getting up. 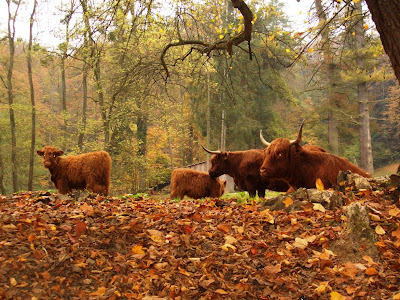 And here we have the "Reblaus" = "vine louse" or Phylloxera, which we saw in one of the vineyards. 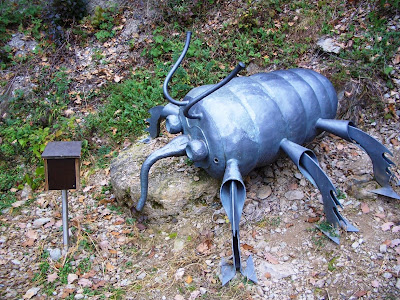 Beautiful photos, thank you for sharing them after all!

Thank you for sharing! I love hilly sceneries. They are also typical for Eastern Finland.

My kind of post! I love seeing the countryside and animals in Austria. How beautiful! Your homeland takes my breath away. Thanks for sharing. More, please. :)

I can imagine that's a lot of wool and they come in all those shades. Where I'm from they had those highlands grasing around a nuke plant, so they didn't have to mowe around it. It was always a great sight to see.

Good of you to show us the photo's even though they are from Oktober.

I'm so glad you didn't delete the post. I loved seeing the pictures!

Thank you for sharing those pictures! They are so beautiful!

How magnificent! Thank you for sharing your wild adventures.

I SO love animal photos! Yours are superb!