There's too many FO's to show in one go, so lets get started.
I've never stopped knitting, crocheting, or spinning during my break. In fact I've been quite busy, but it was nice to work on things, and not have to think about getting it done, so I have something to show on the blog. It was kind of relaxing.

For those who are on ravelry, and/or flickr contacts of mine, have probably seen these already.

I made the fingerless mittens as gifts for some of my relatives, they REALLY loved them: 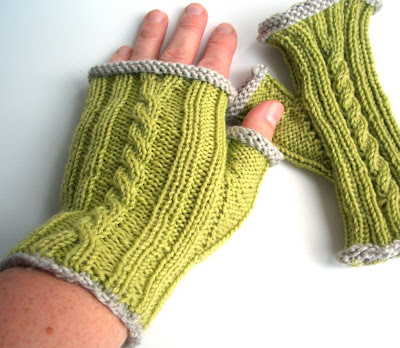 pattern: Rib-and-Cable mittens by Marji La Freniere, IK Spring 2006 magazine
yarn: Debbie Bliss merino dk
needles: 3.25mm
for: my cousin Romy
These mittens are lovely, and easy to make. It's the first and only time I liked a reverse stockinette thumb. 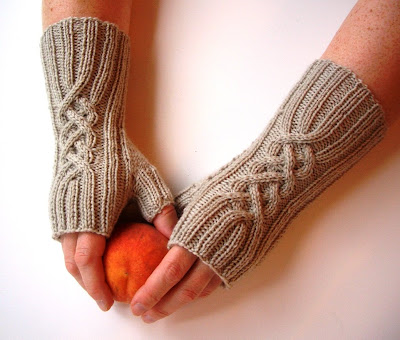 pattern: Princess mittens, by Jennifer Hagan, "The Knitters Book of Yarn" by Clara Parkes
yarn: Debbie Bliss merino dk, color # 225102
needles: 3.5mm, on 5 DP
for: my cousin Daniela
I liked these a lot, and it was hard to give them up. 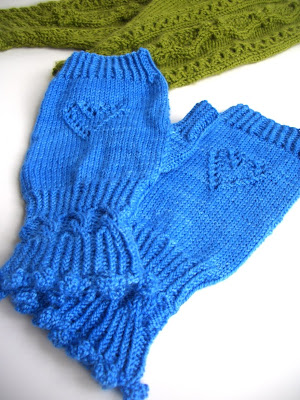 pattern: Kyla by me; I knit a heart shape instead of the cable on top
yarn: Koigu KPM
needles: 2.5mm, could have used smaller needles, it turned out a bit loose
for: my aunt Rosi 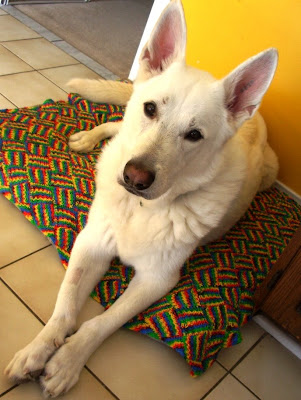 pattern: Bliss Blanket by Melissa Goodale
yarn: Butterfly Super 10 multi color # 2016-Carousel, 5 balls (1100 yds)
needle: 4.00mm
size: to cover the doggy bed
I thought I would go insane knitting this. I like entrelac, but I don't like this cotton yarn, or better, this color. I wanted to get it out of my stash. Did not think it would end up as cover for Sam's pillow in the kitchen, but it did. This is a lovely pattern for a baby blanket, with any other yarn, I would knit it again. I made it a little bigger as the pattern calls for.

I did not nearly spin as much, last year, as I wanted too. I managed to finish this though.

I've started knitting a scarf with this yarn, but ripped it out again. It didn't look like I imagined it would. Now it's on time out, like all the other handspun yarns, waiting for the perfect pattern.

sam looks awfully happy on his new blanket! :) i knit a small blanket to put on the pillow chloe sleeps on. she loves it! reminder to self: wash kitty blanket.

Beautiful fingerless mittens - I love the blue ones the best!

All the mitts are fantastic - and fun to see your mitts with a heart - a good idea for Valentine's Day knitting!

But that blanket was something else. It looks incredibly complicated but worth it!

All your mitts are wonderful. Love the doggie cushion :)

My favs are the Princess Mitts and the doggie blanket.

Monika, thanks for your comment on my blog. Makes me feel better to know others are using similar treatment methods for their aging dogs. It meant a lot to me. Sometimes I feel like I'm treating him to make me feel better. glad to know it's not just me and that I am not living in a fantasy that Beau is actually benefitting.

I knew you could hang in there and finish that blanket, even if it's for the dogs now. I love your hand spun. What great colors.