Last night we were watching Dr. Dolittle, the old one, with Rex Harrison. I was watching Sam, because he usually just sleeps somewhere in the room, but last night, he was in front of the TV, like a Sphinx, watching, occasionally barking, and during the songs, snoozing. It was fascinating to watch him. He LOVED it! Biko too, but she likes to watch TV most of the time, no matter what's on.
It's prime swimming time right now, and Biko does it as often as she can. She's so well now. I haven't heard her yelping in pain for quite some time now. She's recovered so nicely, it's wonderful! 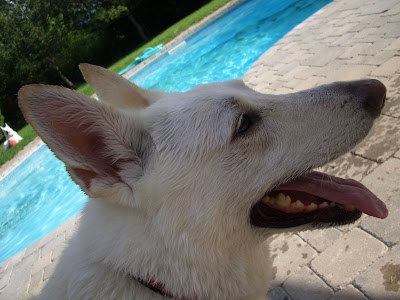 Biko fresh out of the pool. I like this picture, because Sam's got to be in it as well. 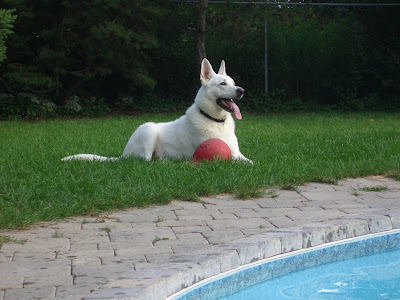 He's keeping a healthy distance from the pool. He's just heard the neighbours kids come out in the back yard. Here are some pictures of him playing tug-of-war with DS David.

I've finished the green scarf, one sockpixie sock, and two of my spinning projects. Just so you know what to look forward to. ;o)

I've already picked out my next spinning project, one where I'd like to knit with the yarn, as soon as it's done. BTW - I'm NOT spinning Sam's hair!

I better get going. We are having a thunder storm right now. I don't want to loose this post, just because we most likely will have a power outage in a few minutes, as always. So, bye for now.
Posted by Monika at Wednesday, August 06, 2008

Sam and Biko are such handsome/pretty dogs. It looks like they are really enjoying the summer.

That is hilarious that Sam likes Dr. Dollitle. I’m with you for some reason spinning dog hair has not appealed to me,...yet. Although the white fluff you get would probably look nice in a hat or mittens ;).

You have been so busy knitting. Hope the black out isn;t too bad.

Love the photos and the Tug of War!! Glad to hear Biko is goping so well. Peri likes the Vet part of a lifestyle show. I taped a Labradors segment and she likes to watch it!!

I always love to see the pictures of your dogs ... they are both handsome/beautiful ones. How often do you have to replace the balls for them? ;)

I love the pictures in the water - they look like polar bears! So nice to see them doing well.

Sam has good taste, the Rex Harrison version is the only REAL version of Dr. Doolittle. Eddie Murphy, nice try, no cigar.

I can't believe you're not spinning his hair! lol.

I love the mosaic of the dogs, Fantastic!!

Your dogs truly are gorgeous! :) My dogs are jealous of the swimming pool. And your photos are great.

I think we'll be getting your thunderstorm soon (I live not far from Cornwall.) I see your hydro is about as reliable as our own...

Your dogs are so beautiful. My Bunny likes to swim, too.

Our dogs like to watch Dog Whisper and Dogs with Jobs. (Their favorite cartoon is Teletubbies.)

The only time my 3-year old dog watched the TV at all, was when I was watching a documentary on wolves. The first time those wolves howled, my dog beelined to the couch. "Under" the couch, I mean. Silly scaredy dog!

The dogs are enchanting as always. I bet the swimming is really good for Biko. You have me intrigued with your next spinning project!

Wonderful pictures and stories of your dogs again! Nice pool. Is that in your garden?

Your dogs are so cute.
And it looks like they ar really enjoying a swim ;)

Looks like both of your pups have lots of fun, both in their own way.

They are really regal looking fellas. I WISH I had a pool for my dear Huck.

Dog TV, nothing wrong with letting them watch it. Funny when our kids watch,, we feel guilty. When dogs watch we know how smart they are.

Super photos of the dogs ! Lucky dogs a pool to keep cool and an owner who loves to play ball with them . Happy to hear that Biko is healing well ...

Those are lovely pictures of Sam and Biko! I'm so happy to hear that Biko's all well!

Timber loves to play tug of war with his jolly ball, too, and he plays to win. I can't hold onto it, so he's always thrilled when a big strong guy comes over who can give him a good game.