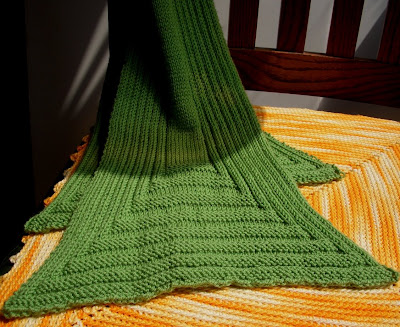 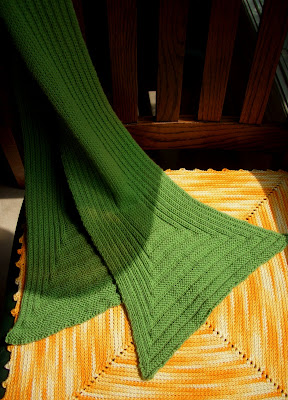 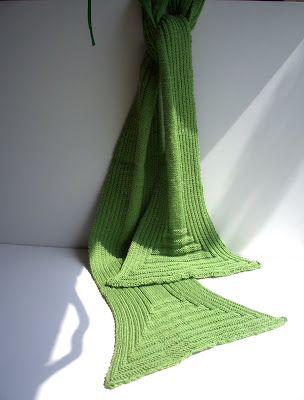 The Geometric Scarf: originally made with three skeins (each skein is 176yds) of Koigu Premium Merino in pink (finished scarf 10" x 36", a little short for me), it had "decorative rose quartz beads" on each corner, and was blocked out, so the scarf was the same width throughout.
Mine, a tiny bit different: I liked the idea of the rose quartz beads, but when I thought about it, it seemed a bit dangerous to me. Imagine throwing one scarf end behind you, grazing everything within reach, and panging on your back. O.K. a little far fetched, but certainly possible. Besides, I don't have any suitable beads. So they are out. I don't even have enough yarn left for tassels. So for the time being I just leave it as is, but I will keep my eyes open for something I'd like to have tangling off the corners.
I also left ten stitches in the middle in stockinett stitch, just because.
I washed the scarf and kinda blocked it. This yarn is very pounce, it's like a rubber band, bounces back so easily, that I didn't even attempt to block them out.
And I have to say, I was quite wrong, in my assumption that one more ball of yarn (I used 4) would not make a difference in the overall length. Why did I think that?
Here are some more specifics about the geometric scarf:
pattern: from the book Vogue' Knitting Scarves, Vogue Knitting on the go! As seen here
pattern is on page 47
yarn: Corallina merino extra fine (made for Baby items, so soft and bouncy), one ball is 50g/187yds, color # 40, a beautiful grass green, machine washable 100% merino, I used 4 balls = 748yds
needles: 3.5mm
size after washing and lightly blocking: 6" x 74" (quite a bit longer than the original)
start-finish: July 28 - August 05
It was the most boring knit, but I like the beginning and the end of this scarf. It's probably the softest scarf I made so far, with zero itch factor. The only reason I finished it so quickly was, that I wanted to take pictures (very uninspired I might add), before my guys took my camera on vacation with them. So here it is, I even might knit another one someday, who knows?
Posted by Monika at Friday, August 08, 2008

I love the scarf, a wonderfull green !!

That's absolutely beautiful: I love the green-ness but the shape is wonderful too. It looks very geometric!!!

I like the bell shape at the bottom and the green is quite nice and calming. I laughed at the boring knit comment and yet you plowed through! yay! It is really a pretty, unique scarf.

I've always thought the same thing about those bead tassels. Just asking for trouble. But it's a good looking scarf all the same.

Very nice! I like how each end is wider than the rest of the scarf. Good choice not to fully block it. :)

It might be a boring knit, but it's definitely not a boring design...I love it :)

You are so good to give up your camera for two weeks...not sure I could do that!

it is a lovely scarf, I cant imagine you making something that wasnt lovely. You have a good eye for matching colors and designs.

I agree with Hakucho - it may have been boring to knit but the end result is far from boring!

I had to laugh at why you didn't use beads - good call.

This scarf will be stunning worn - I can see it tied in front with a coat. Enjoy :)

I love the shape of this scarf - very appealing. The boring slog was worth it!
Michele

I saw the scarf on Ravelry and I love the shape of it. I certainly wouldn't have the stamina to knit so I'm impressed that anyone did. I understand the blocking koigu thing. I did a lace shawl with it once and it refused to stay blocked.

The scarf is really cute. The possible bead disasters would probably happen to me.

I love the texture of the scarf. I got a chuckle out of the reason why you decided to leave the beads off.

The yarn you used sounds so lovely and soft. I'm jealous, I've been knitting with cotton lately and it bothers my hands. Maybe I should start a nice soft wool project to give my hands a break ;).

What a gorgeous scarf. love the way the bottom bells a little

This scarf is beautiful. I am sorry that is was that boring to knit but it was definitely worth the effort!

It came out beautifully and I'm SO with you on the dangers of beads! :)

So pretty. That's a cool pattern, and the green is gorgeous.

The scarf is beautiful. I've got that book and I've been wanting to knit that scarf for quite awhile. I hope mine turns out as well as yours!!

Oh, I like your version. How cool is that?!

I love the unusual design of this scarf . Great colour, very bright and cheerful !