Do you remember my poppy buds, I showed you this spring? I have to show you these pictures before the next winter comes. Right around the time they bloomed, we had a lot of thunderstorms, mostly during the night. One morning I found these, pattered, but gorgeously orange poppies. 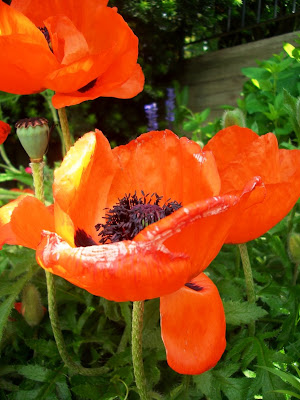 It's a pity they are so short lived! One day they pop open, the next day they are gone, especially with rainy weather. Did you hear, that we had the wettest July in a long time this year? 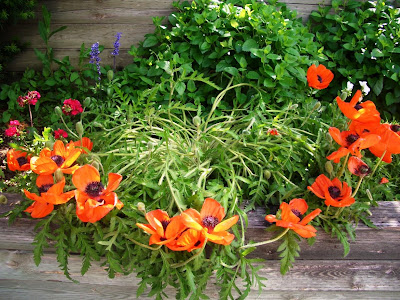 Before I forget again, there are people who leave comments asking me stuff, and I would love to reply, but if I don't have an e-mail address or blog link, I can't do that! So if you wanted to know something, and haven't heard back from me, that's probably why.
I've been knitting on my green geometric scarf, but let me tell you, it's boring! It's beyond mindless knitting, only the beginning and end of this scarf need some attention, so that's why I broke down and cast on for some socks! Yeah, I can't help myself. I love knitting socks. I had no idea what they will be like. I just knew I'm going to make them toe-up because I'm not so sure about the yardage of the yarn. I'm almost to the heel now, and I surprised myself by making it into a simple variation of Cat Bordhi's "Spring Thaw" socks, which I've finished, but have yet to show you. I'm quite please how they turned out so far. 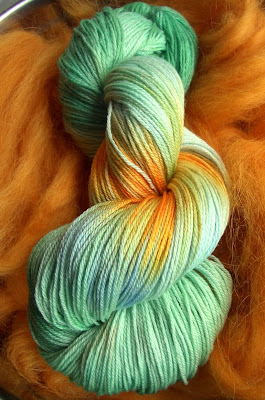 I've got this yarn here, at Sockpixie's store. I like her colorways, but the shipping costs are too high for my liking. So this will be a one time purchase for me. When I first saw this skein, I knew it would be pooling, and it did, but it's kind of nice. The yarn is merino/bamboo blend, first time I'm knitting with something like that. It has not much give, but it has a cool feeling, a little shine, and it's soft.
I have three !!! spinning projects in the works, and want to finish at least two of them until Thursday next week. That's the day when my camera goes on vacation to Australia, without me. I need to have something to show you, during it's 2 weeks absence. I better get back to my wheel and work on that fiber some more.
I think I'll make the green shawl my outside project, for when I get interrupted by Sam and Biko. He's taken to play tug-of-war with his remnant of red ball. I get the handle, he gets the rest, and you know how it goes. I haven't managed to take a picture while doing this, but he's so cute, and he gets frustrated, and whines, when he can't get the ball free. But it's hard for me to hold on to, because I'm laughing so hard! He's soooo strong!
Posted by Monika at Friday, August 01, 2008

Your poppy flowers are beautiful! I'm glad you were able to get that magazine with the Cat Bordhi pattern. I had to smile at your email you sent about how it was your son that found the magazine for you. I look forward to seeing the results and the spinning you are working on.

you know how much i love orange poppies!!! they are so bright and vibrant. that darn rain... :)

The flowers are so pretty. I wish they lasted longer too. One good rain or wind and they are gone.

And he can probably play that for hours, right?

Those socks are pooling nicely!

Gorgeous poppies. I envy you your wet weather, we're heading into another drought.

Love the poppies. And I also really like the colors in that yarn but I can see how the pooling would be an issue. Gotta love animals and their toys. :-)

The poppies are beautiful. Too bad they suffer from the rain.

I love the stories about your dogs.

Your socks match your poppies!

I love knitting with bamboo - it's so soft - I just wonder if it will wear well as a sock? Like I should ask - as I usually knit my socks in merino wool.

The big poppie is gorgeous and so is the yarn from Sockpixie. I love the soft green color.

Also wanted to make sure you found the e-mail letting you know that there's an award on my blog for you.

Your poppies are gorgeous...glad you got a picture of them in their glory! Love your sock. Color is so cheerful. I love toe up socks now that I tried them :)

Pretty colors in the socks.

And how I wish I had a place sunny enough to grow poppies in! Yours are beautiful!