How about snuggling up next to Sleepy Sam? I kid you not, that's his name, not given by me, but by Sandra Polley from this book.

I was looking through several knitted toys books, to find a toy which I could make with my 170yds of handspun, when I stumbled upon this little guy. How could I NOT knit him? 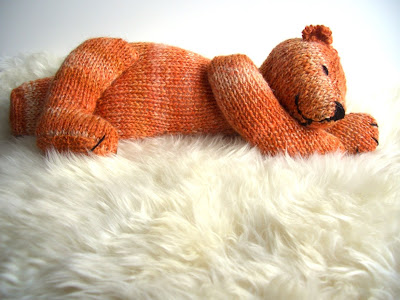 I tried to spin thicker as usual. I thought I would navajo ply it, but since it was already thicker singles, I would have been left with not a lot of yardage, so I did a 2-ply instead. It turned out to be 170 yds, 13 WPI - mostly. Next step was to find a pattern. I knew I wanted to knit a toy, and can you imagine my joy, when I found "Sleepy Sam", and that in fact I could knit him with my yarn? 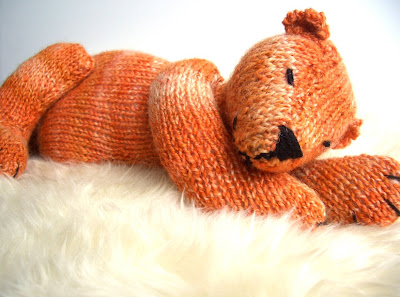 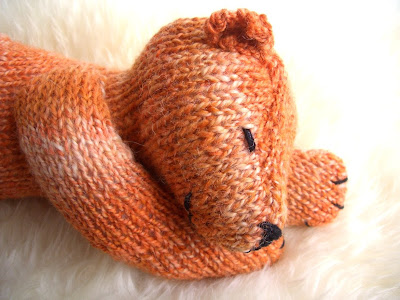 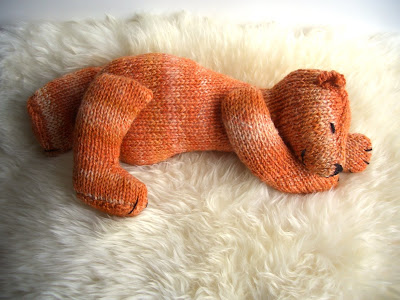 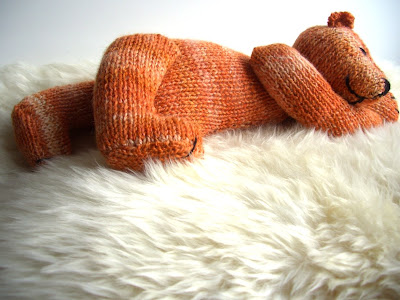 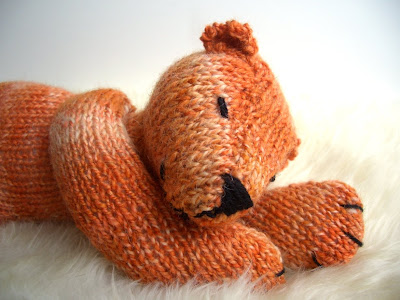 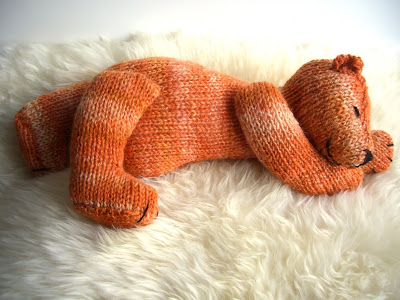 I've knit all pieces as described in the book, but something WAS horrible wrong with the body parts. It looked like the head was on the wrong way. Head and body were knit in one piece. I thought I screwed up, but I don't think so. So this bear has his belly on the back side. Good thing he's so comfortable sleeping in this position, because he would have a hard time being upright. I was really put out, when I realized this, walked away, but in the end still continued to sew up the pieces, stuff them, and once I had the face on him, I was in LOVE!
Sandra Polley suggests that you iron the pieces, but in the past, I didn't have much success with ironing, the edges still rolled in quite madly. So I soaked all pieces, pinned them out, and let them dry. It was so much better, and so much easier to sew them together.
One other thing I didn't agree with the author. She said to put pellets into the belly, like a beany baby. She just pours them inside, without putting them into a little bag or something. (I didn't read the book cover to cover, so she might have mentioned something about a bag somewhere, but I didn't find anything.) Of course, lazy that I am, cutting corners where ever I can, I did as told, and the pellets tend to come out easily. Lesson learned. Don't be lazy. Take sewing needle, and a scrap of fabric and sew a little bag!
I did his face twice. I wanted him to smile in his sleep. I think I've got it. The soles, and the inside of his paws where supposed to be knit with a different colored yarn, but I liked it just fine, the way the handspun turned out. I even had some left over yarn. I'm definitely going to knit toys with my handspun again.
Posted by Monika at Monday, June 23, 2008

SO cute! I am totally in love with your little teddy ;) Arlene

OMG, he is the cutes bear I have ever seen!!
And the face is adorable.

The sleeping smile is just perfect. Reminds me of my cat when he's sleeping.

aww how cute is he!
I love the handspun you chose, he's perfect!

Sleepy Sam is 10-thousand kinds of adorable, Monika! Will you knit toys on commission? Really, he is special because of your handspun and talent.

Your bear is soooooo cute! I love the orange handspun.

What a great project for your handspun! He's adorable.

wow, he is awesome! and knit with your own hand-dyed, hand-spun yarn makes him even more special. the facial expression is perfection.

He's adorable! By the way, I completed a pair of your Smoking Hot Socks recently, and I love them - I still need to take an FO photo...

i can't understand why you love him. oh wait, I CAN! he's adorable, monika!!!

So cute! the project came out so nicely. I love the little bear. We must be thinking the same. I've been finding some toy patterns to go with some of my handspun skeins.

How sweet! I love the face details, and the colour is perfect!

I LOVE HIM Monika!! he is just too cute for words!!!

Aaaaa... he's adorable... makes me wanna cuddle with him and take a nap.

He is SO cute! I usually don't get too excited over knitted bears but he's just so perfect I may put him on my list.

Your sleeping bear is so sweet - he looks like he's hibernating with a sprinkling of snow on him but he's still cozy and warm - whoops, slipped into goo-gooing over a knitted toy! Love him.

There's just something about a cute, knitted bear asleep on a bearskin rug.... (grin)

Your sleepy Sam is adorable.

A big "yeah" for getting thicker yarn out of your handspun and it looks awesome knitted up.

That is so SWEET! I love him, especially that color! :)

Sleepy Sam turned out perfect. I like the handspun for toys too. I only did one so far, but it makes them even more unique.

You sleeping teddy bear looks great! And your teddy has sweet dreams, when he sleeps, I am sure :o)). I love to knit toys too. And I noticed I should visit you net corner more often.

That is such a cute bear! I'm going to have to find some books/patterns for cute little toys like him....

And he looks right--belly and backside, I mean. You didn't do the pattern backwards. Old fashioned teddies have those pot bellies like that. In fact, he looks like an orange version of the oldest teddy in America. I believe it's called Aloysius, and he's a blond bear. In the Smithsonian, I think. All I know is, my brother named his cat Aloysius, after the bear (so if my brother was wrong about the bear's name, be it on his head. :-)

I love those little pot bellies on the bears. Makes them so much cuter than flat bears!

Totally adorable!
Oh! and I use pieces of nylon stockings knotted at both ends to
put the beads in. It seems to make them more flexible or whatever the
word one might use.
Thanks for sharing! It sure brightened my day.

He's precious! You did a fantastic job on his face - he's perfect :) I agree - what a great use for your handspun yarn!

Sam is adorable and the yarn suits him.

Oh, he's adorable! I love the way he sleeps on his side with the little smile. I have got to get that teddy bear book.

The bear is so cute & I think you did a fantastic job.

I've had this book for a long time and have always loved this bear. Your version is adorable - great idea for the yarn.

Now he needs a playmate. And clothes, socks, a hat. Quilt and pillow.

Absolutely adorable!!! I love him! I like his belly just where it is!