You know, a while ago I made this little kitty bag. After that I wanted to make a real bag, large, maybe something to use for every day. I made this one. It's my own design, except for the shape. The shape comes from Carol Ventura's book "Tapestry Crochet" by Carol Norton (same woman, different name, it happens). Anyway. I'm not very happy with it though. 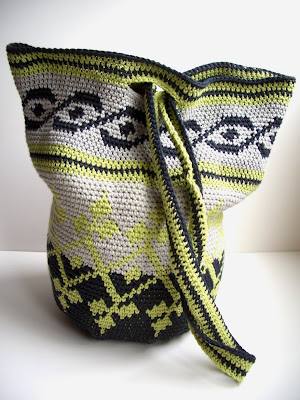 It was A LOT of work finishing this bag, and I almost didn't, but no way was I going to rip out even one row of this. I was disappointed with the colors, and how they played out together. I would make it different, would I have to make it again, which I'll never will. The strap is too small, but making it wider, I would have to add height at the same time to the bag, which I didn't want to. As you can see the strap is curling, it's no good! I put my sewing basket in the bag, and it fits tightly but it shows the round base so nicely. The bag would never be filled like that, it looks weird on top. I think I'll take a break from tapestry crochet for a while. I still would like to make a nice bag, which I can use for every day, someday. 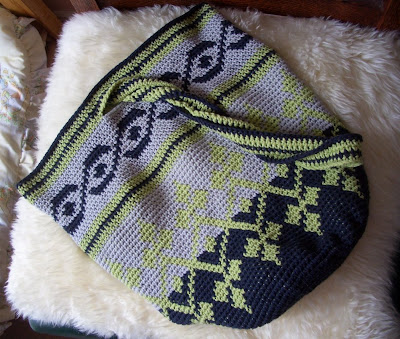 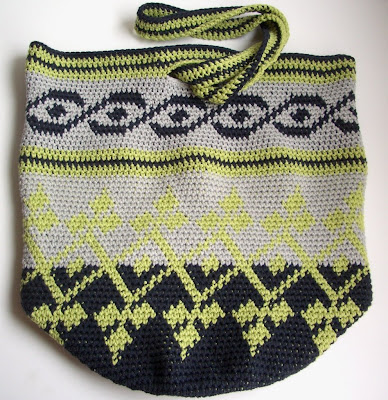 Yesterday evening, my DH called from the balcony to bring the camera. It was 9PM when I took this picture. I like the clouds, they remind me of mountains.

A little while later, at about 9:45PM I was watching the night sky for lightening. It's what we called "Wetter leuchten", only lightening without thunder or rain. It was beautiful to watch. It was almost dark, but you could still see things moving against the sky, that's when I saw it! A bat was circling above the pool. It was there when I started to watch the sky, and continued to circle when I left my watch post about 20 minutes later. I hope she's got a belly full of mosquitoes! I'm telling you, there are more, and bigger ones, this year! They never bugged my husband before, but even he complained about them being a pest this year. Anyway, I saw bats before, but I did not know that they know a good spot to feed, when they see one.

We had a thunderstorm during the night, and again this morning, but it finally cooled down a little bit. On the bright side, everything is growing like in the jungle.

I think the bag is gorgeous. I like the color combos and it looks like it was a lot of work. If nothing else, it would make an awesome Knitting In Public bag -- hanging off your wrist with the yarn inside while you knit away.

That bag is a beautiful work of art!
So you are not happy with the strap but you can change the strap style.

Idea: Why don't you undo back to where you started the strap - that should be about an inch or so. Finish it off without that kind of strap and make two side straps - like a regular tote bag?

I don't think it's that bad--you're just hot and cranky. You'll be happier with it once the weather has cooled off some.

The cloud picture is wonderful--what a beautiful thing to be able to watch!

Eeek. Bats creep me out... but I guess they do good things :)

I love the bag. I wish I had the patience to crochet something big...

I LOVE your bag. Too bad about the curling straps. I wonder what you have to do to keep them from curling?
You always do such amazing work :)

Those clouds really do look like mountains. I do a double take every time I scroll down.

The picture of the clouds is beautiful!!

Really fabulous tapestry bag, Monika! Lot's of work as you say, but worth it.

I also love that bag! Sorry about the curling strap... maybe you could line one side with leather?