Last night was not a good one for sleep. I've read until midnight, and forced myself to try to sleep. It was too uncomfortable. There was a thunderstorm, and lightening, and Sam freaked out, as usual. I opened the door, so he could go downstairs. He went, but came back soon, and of course as soon as he entered the bedroom, there was another lightening, followed by thunder, so off he went again. I got up a little later to let him outside, since he was ringing the bell (thunderstorm was over by then). I got up at 6 AM, not rested at all.
Now it's mid morning. Just got back in from the garden. I have one poppy plant and it opened three of its more than 40 buds today!!! It never had so many in previous years. 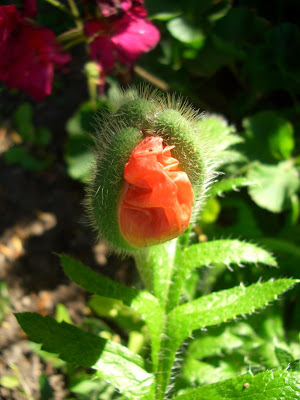 Look how this pedal is bursting out of it's bud! I love this picture. 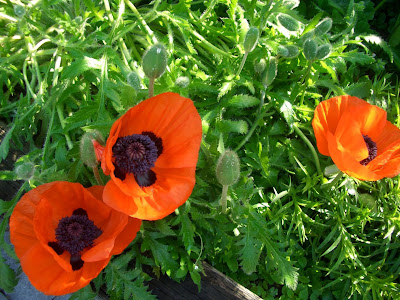 I counted the little green buds; I stopped at 43, I know I missed a few. 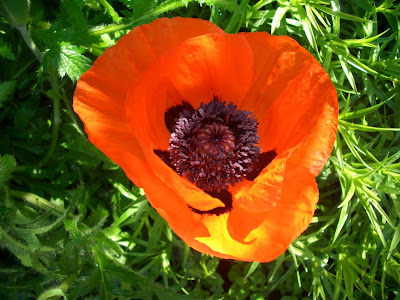 I like sun, I really do, but after the rain during the night, it's humid, that my sunglasses got fogged immediately after stepping outside. Everything is sticky, including me. The dogs ran outside, made their usual round, went to drink some water, and looked at me, tongue lolling. I just pointed at the door, and happily they went. 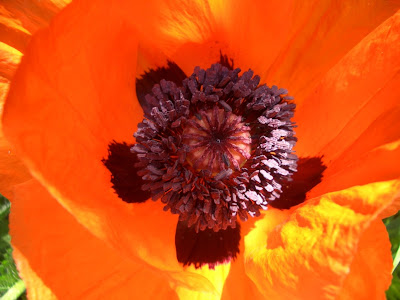 I try to not complain too much about the heat, but it's really very uncomfortable for me. It makes me stuck in the house with the A/C more than I would like to too. Anyway, only three to four month of that to go. :o)
Posted by Monika at Monday, June 09, 2008

Your poppies are just gorgeous! I am used to red poppies but I think that the orange ones might be a little more distinctive. If only I lived on the ground floor so I could have my own patch of flowers.

That is phenomenal - so many buds on one plant. The colour is wonderful. I never cease to be amazed at the intricacy of flowers.
Thank you for sharing your pictures.
You have my sympathy with the humid weather. We of course are just starting our winter in Sydney, so the moisture is just a tad cooler than yours!

Beautiful Orange.
I agree with you on the heat. Today it is almost near record high temperature today.

don't you just love poppies?! yours are truly beautiful. i love the orange ones.

i haven't counted the buds on our poppy plant, i don't think there are near the number of yours.

I love poppies and yours are gorgeous :)

Wow, those poppies look fabulous! We don't have any real flowers yet - just a few weeds and flowers that have been cultivated and planted. If you don't like the heat, then I tell you that my town is the place for you! The hottest day so far this year was last week, at about 21C. And that was just a freak day. Today it was back to around 8 and tomorrow should be more like 6.

That is just astounding, that many buds on one plant and they're Gorgeous! Love that orange!

Amazingly it is only 68F here but it's raining, thunderstorms.. still, it's amazing for Oklahoma.

Beautiful poppies! They are Steve's favorite flower. Now, I know it's a great crop - but - I don't want you to go harvesting any of them - LOL

It's nice that you see the little pleasures in this season, even if you don't like it otherwise.

I've never realized it could be that warm in Canada! I hope it will be better for you soon.

The pictures of the Poppies are beautiful! Especially the one of the bursting bud.

Wow, those are gorgeous!! I'm so glad you posted the pictures. I hope the heat wave breaks soon. We are expecting 99 degrees here in Jersey. Yikes. Stay cool!

We can commiserate together. I loathe hot, humid weather. I haven't put the window ACs in yet because it just seems like it's too early in the year, but the past week or so has just been miserable. The dogs are ready to come in after half an hour.

Your poppies are GORgeous. I can't wait to see a picture of when most of the buds have opened!

That poppy is beautiful! I just love orange flowers. I hope the thunder and lightening stay away. :-)