Thank you all, for your 'Sleepy Sam' love! It makes me happy to be able to look at him every day. He's still sleeping, not very active this guy, but that's O.K.

With all the sewing going on around the knitting blog world, as seen here, here, here, and here for instance, made me dust off my sewing machine, get out some fabric, and sew. Well, I WAS motivated, really, but more than two pillow cases, was not in me. I don't even want to show them here. I bought this fabric some time ago, to make a tote bag, but now I didn't like it for that anymore. It was just enough for two pillow cases. Yeah, it's dogs all over. Thought a tote bag would have been to kitschy. 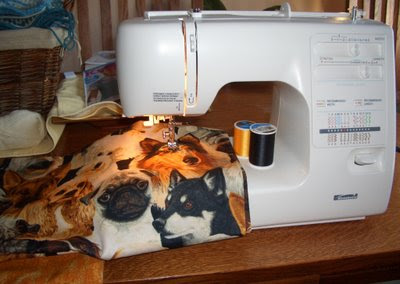 I'm leaving the machine out for a while, lets see if I can muster the will to sew a few bags, or one. All that quilting made me think of a finished top I've stuffed in a corner somewhere, must be almost 13 years old now. It's old enough to be a real Quilt by now. So hopefully, when I'll find it, I still have the urge to finish it. I did finish the socks, I was test knitting for Bea, more about them as soon as I they are dry, and I get some better pictures. I loved knitting them, that's for sure, although I didn't like the yarn I used, as I said, more about it later. 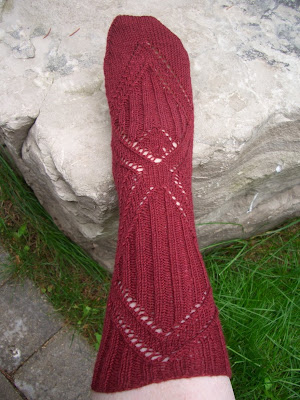 Now I'm working on my crochet star blanket, which grows slowly, and another Baby blanket, for which I'm using the same Butterfly Super 10 cotton, but in another colorway. It's VERY colorful, and I couldn't think of anything better to do, then to knit entrelac with it. It hurts to look at it for too long, but I still like it.

In the picture you can see the base triangles, and a couple of rectangles. I'm on the third tier right now, and having fun! 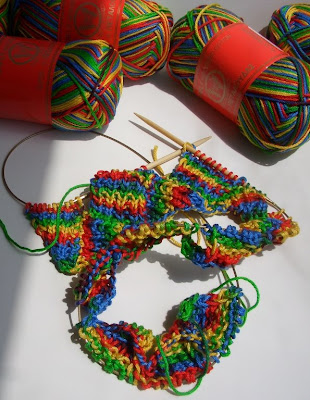 I have some finished singles to ply, and some merino/bamboo to finish spinning, as you can see, lots to do. I've also done a lot of weeding, and tomorrow I'll plant my loveage, and spearmint plants, all except two. I found two bunny nests in my neglected beds, but both were empty, thank god! If there would have been some wiggling action in it, I would have had a heart attack. I usually don't wear gloves for gardening, but the last time my fingers bled, so I decided to look for a pair, and actually use them. Took no time at all, and my finger tips where out through holes in the gloves. Must have worked them too hard. But, if I had not worn them I would have touched two North American toads, which I have done once before, and I don't care for the feeling. I like to have them in our garden, I like the "music" they make during the night, but touching them?- Na-ah.

Just reading your posts makes me tired! I'd love to see your quilt top if you can find it. :-)

I'm really glad that you didn't mention that desaster of files with which I bothered you.
The .pdf-file-making works well now and I assure that there will not be such blurry files in the future.
I'm really sorry about that.

That's going to be a colorful blanket!
I've tagged you with an abc meme ;)

I look forward to hearing more about the sock, looks like a very nice pattern.

Entrelac, I'm trying it for the first time. I'm glad to see mine looks similar to yours. That must mean I'm doing it right :).

Good luck at finding the quilt top, and maybe some new gloves :).

Lovely sock. Hmm. I seem to be doing the non-YO version in just about exactly the same colour - LOL!

Ha, now your sewing again too. I do like the idea of small quick projects like that too.

My sewing machine could use some dusting off too. And don't ask me how much fabric I still have stashed away in my closet.

Wow, that is indeed one colourful blanket! Good for you! I don't know why people always go for the boring pastels when making things for babies.

frogs do sing rather wonderfully.

i understand the loss of a hobby. it's okay, but it still feels a little weird. embroidery is mine. i should send you photos of things i've made.

Oooh! I love the sock!

Beautiful socks!
Speaking of quilts...I have an almost finished quilt top done by hand in grandmother's flower garden pattern with the small hexagons that I need to finish some day. I started it back when I was in college oh so many years ago. Maybe I'll finish that and the cross stitch picture that I started over 16 years ago. I'm much better at finishing knitting projects :)