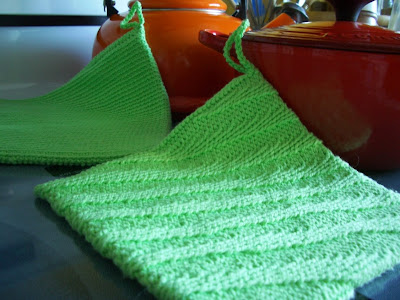 Now I have two pot holders. Didn't know until recently that I needed some. Plain old dishcloth did the trick so far. People! Crochet takes forever! In the foreground you see the Bosnian crochet pot holder, which was my first one. In the background is the one I just did single crochet, which was only slightly faster. 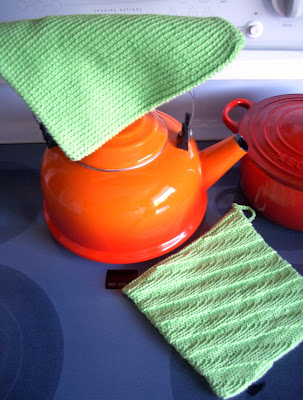 At some time during crocheting along, there was this chant formed in my head: wasabi-wasabi-wasabi-am I done yet? 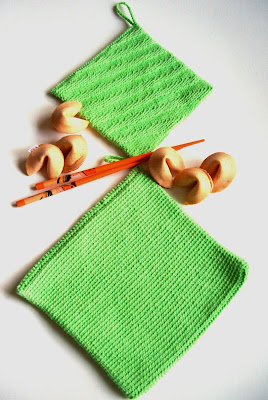 Both pot holders were crochet as pouches, and crochet shut on top, and in the end a loop was formed.
Specifics about the smaller pot holder:
pattern: decorative hot pad by Nancy Nehring from the book Donna Kooler's Encyclopedia of crochet (Leisure Arts publication)
yarn: Patons Bumble Bee Baby Cotton, 100% cotton, 50g/123yds, used 1 ball exactly, with a couple of inches left over.
hook: 3mm
size: 6"x6"
I made a lot of mistakes, it doesn't look like the one in the book, bares just a fleeting resemblance with it. The instructions, though for beginners, where totally confusing to me. I was about to give up, when I found ONE other entry about it, when I googled for it. The person, though not finished, and complaining about how slow it was going, did make one thing clear to me with her picture. The pattern was visible in the inside of the pouch. So I started over and as soon as I had about an inch, I turned it inside out, so I could see the pattern on the outside. I mentioned in an earlier post, that you only have to be able to count to ten. Let me tell you, it's not that easy. I could not pick it up and continue working on it, unless I stopped at ten, and knew it. If I was interrupted counting, and crocheting, I had to rip back where I changed the crocheting from back loop/front loop. Anyway, it sounds confusing, even though the actual crocheting is easy. The math in the instructions didn't make any sense to me. I was looking for errata, but couldn't find any.
The finished fabric is tight, and thick, great for hot pads/pot holders though. It will be the only one I ever made.

The second pot holder (since you need two, I had to make another one), I wanted to go faster. I chained the same amount in the beginning, but it came out 2 inches larger, because single crochet is not as tight as just slip stitches. Here I could put it down whenever, and pick it up and continue. It still took longer than I thought. I used 1 1/2 balls for this one. I made it as pouch as well, it's about the same thickness, a bit handier, because of it's size: 8"x8". I'm glad it's done.

Of course, being that color, which reminded me of wasabi, led to the chop sticks, and fortune cookies. :o)

Now I have only the Queen Anne's lace shawl on my needles, but I found something to make today, which I did NOT know I needed either. It's Tracy's fruit sock. But it will be a fast in-between knit. Getting right on it.

Monika, I'm sorry, but your post had me giggling all the way through. Your potholders look *great*, though!

I can see why you though wasabi! Love the colour for kitchen use and you did a great job on these. I thought the pictures with fortune cookies and chopsticks was very apt :o)

Great potholders! I love the color and I can't imagine they took that long? I've heard that crochet uses much more yarn than knitting - maybe that's some how related. I need a fruit sock too -that is hysterical - I can't wait to see yours!

i LOVE them! i am a user of pot holders...i'm a wimp and dislike the thought of getting burned. :) i now need to learn to crochet, thanks monika! LOL

If you are in such need of potholders, maybe I need to squeeze in a pair for you sometime.

Two never to be repeated potholders! Get them while the getting's good! Your post cracked me up. Crocheting isn't the new knitting for you, I take it?

Aw, Sam. Guarding the beautiful yarn of yours. What a guy.

Very nice potholders .Gorgeous colours and super photos. I'm currently crocheting a baby blanket and only have the patience to work on it in spurts .

I like your pot holders too - and love the colour (hate it for baby clothes tho!). I have just tried knitting a baby jacket with cotton - much slower and harder on my hands.

Sorry about all the trouble while making them but I like the potholders very much! Nice pots by the way.

They turned out wonderful. You have some very lovely potholders there.

They look great, love the color!

Oh, I love the Bosnian crochet pattern. You mentioned a book? Care to share?

Your potholder is wonderful. I'm intrigued...must try to find the book :)

Such a bright happy color for such a tortuous project! #1 reason why I don't crochet! (especially tunisian crochet!) tee hee! They turned out great anyways!

Great wasabi pot holders! Pairing them with chopsticks and fortune cookies was genius!

holy cow, thanks for the help on that decorative hot pad. I've been staring at that pattern for the past hour or so trying to figure out what the heck those instructions mean. Then you said the magic word "pouch." Ah ha! Finally! A clue! I'm an whole-cloth newbie at this crocheting thing. I fully expect a disaster, but at least I can now take the first step off that cliff. Cheers!