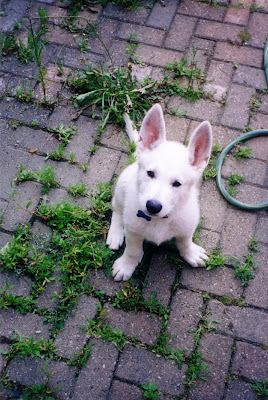 My boy Sam is six years old today. The above picture is one of my favorite pictures of him. He was 11 weeks old then. We've visited with him, throughout his first weeks at the breeders. He only had two sisters, and one brother. His ears were up like that only, when he was looking up like that. He reminds me of a white mouse. 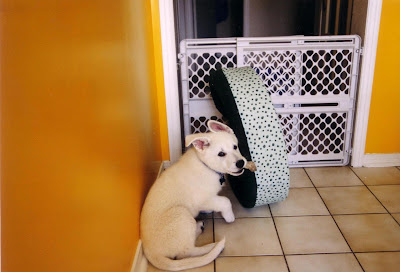 This was taken, when we went to our first and only dog show, with Biko participating. It was incredible hot that day, and a long drive. So my daughter, and Sam stayed home. He's not been a good boy that day, whining a lot and throwing his bed around. But so cute... 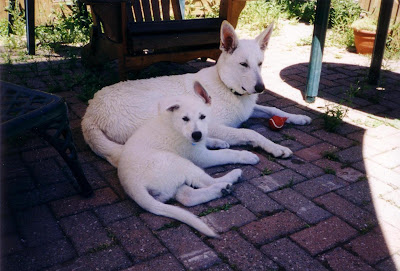 Biko and Sam liked each other at once. Still to this day, when Sam yelps in pain for whatever reason, she sprints to his aid from where ever she just was. Witnessed just a few days ago. Don't know what had bugged him, but she sure took notice. 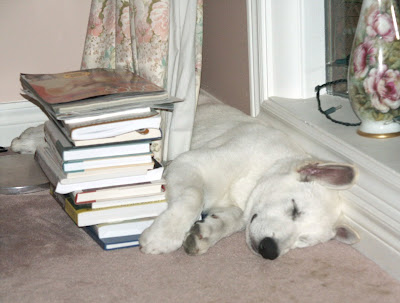 That's another favorite of mine. He climbed back there, without disturbing the books much. With him being six years now, I hope he's not having a midlife crisis. :o)
Posted by Monika at Friday, May 30, 2008

Happy Birthday to Sam!! Many happy returns of the day to such a cute pup. What a joy he is to all of you. Cute pictures!

Happy Birthday! What a great companion!

I love how we can see dogs become close. The picture with the stack of books is amazing!

Happy Birthday handsome Sam! You were a c\very cute baby and you've grown into a majestic man!

Happy Birthday Sam!
I do love the baby pics :^)

it's picture like these that make me wish we had adopted josie when she was a puppy! although those sharp puppy teeth...

happy birthday sam!! give him a scritch for me, monika! :)

Happy Birthday Sam! I love that first photo of him. Such a cute little guy.

Many happy returns to Sam! You're a good photographer, Monika, on top of everything else you do!

(btw - the potholders are great!)

Happy Birthday Sam. I shall give my girls a treat in honor of the big day.

Big smackers and a Happy Birthday wish from Mr Puffy! Your favorite pictures are mine too - so precious.

Aw, puppy! I have a photo like that of Pippa when she was a kitten. With a ridiculously soppy, "Take me home with you" face! Happy birthday. :)

LOL It's my son's Scott birthday today!! He's been with me 29 years. Hmmm not sure it is wise to tell everyone I have son that is 29. :o)

Happy Birthday Sam! You are such a cute little man. You can come over to my house anytime! Monika, what a sweet puppy baby. I really like that first photo of him.

The pics bring back so many good memories of our shep coming to live with us as a puppy. :)

Happy birthday Dear Sam!! I saw Samson and Gabi yesterday and I know they would send their love. Sasha and Sweetie send birthday greetings also!! Sasha is the one on my avatar.

Many happy returns! We love you!!!

Midlife crisis. Lol. Look, he was such a cutie pie puppy dog! till is but puppy-puppy! Aww. I didn't realize Biko was older than he was.

He is so sweet! I have a picture of my black shepherd female Eija (who passed away last Christmas) at that same age looking just like Sam with those cute little ears. Happy B-day Sam!

Happy Birthday Sam! I'm sure you'll get to enjoy many many more.

What a cutie. Happy Birthday to Sam.

Happy birthday!!! Thanks for the baby pictures, he was and still is such a cutie! :)

Happy Birthday Sam...you were such a cute baby :)

Your dogs are so beautiful! It was one of the things besides the knitting that drew me to read your blog! Happy Birthday to Sam! My sister who lives next door has a chocolate lab and you guessed it his name is SAM! We just think our Sam is the greatest! But your Sam and Biko are the BOMB just because of their color--snow white!

Happy Birthday Sam. The Labradors send happy wiggly tail wags!! What a cute puppy and he is so lucky to have Biko to grow up with!!!

Belated Happy Birthday Sam ! Super photos , the one of Sam snoozing behind the books is just so cute. he is one handsome canine...

So cute pictures!
Hope he had a great birthday!

What a darling boy. So very cute, your little mouse! What was on the birthday menu?

Thanks for posting the baby pictures! What an adorable little boy he was!

Sam, Taenzer and Timber send birthday woofs and wags and wishes for many more!