I just have to show you my latest finished project, because I'm soooo glad it's done, done, done. I'm patting my own shoulder, as I type this, and yes, I can do that, but it's slow typing. :o) I was so disciplined to finish this, despite me wanting to cast on for a million other things, but I didn't. 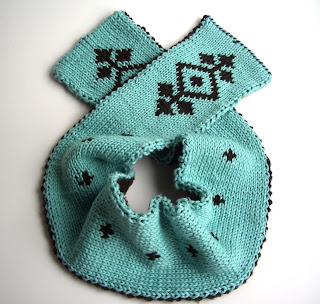 My first, and only double knit scarf is done! O.K. so you almost can't call it scarf, more like a scarfett, because yesterday afternoon, I've decided to cut it short for my own sanity, to the delight of the rest of the household, because I was so grumpy, I drove everybody crazy. 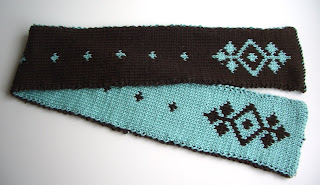 I'm very excited to have this done. After I took pity on myself and called it quits, not surprisingly double knitting didn't seem all too bad. It isn't, but I don't like it. Don't get me wrong, I LOVE what you can do with it, I love the color I've used here, and I liked the yarn, Knit Picks Comfy, and I even liked my design. So, why was this such a big deal?
I don't know, except I had to force myself to pick up this project and work on it. Everybody has likes and dislikes, and double knitting is one of MY dislikes.
It's really HARD to get tidy edges, not even Lucy Neatby has a better solution, I've learned DK from her DVD, which was the best source I could find for learning this method. When you run out of yarn and have to attach a new ball, the only way you can hide the ends is to make a knot as close to the edge as possible, and later pull it inside the two layers, because you have two right sides, nowhere to weave in the ends. But that's not what was bugging me, because I did that gladly, once I was done. Thinking about it, I guess, the tangling of the two strands was one thing, which drove me nuts, and the fiddly beginning of each row. You never get into a flow with this method. For the scarf to stay closed on the edge, you have to twist the strands, after knitting the first three stitches, you have to tug hard each one of them, which means you have to stop knitting, and take first the one color strand, then the next, and the first again. And all this even with my advantage of being a Continental style knitter, which is a plus here. Anyway, I don't like it, I will not make another scarf or, god in heavens a baby blanket (saw some beautiful blankets on ravelry, but now I know it will never be).
I'm glad I stuck to it and finished it. Now I can cross it off my (non existing) list of things to learn, and to do just once. 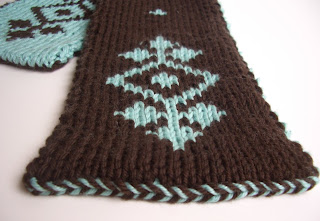 In the foreground you see the bind off edge. Isn't it pretty? I love it. It's called condensed bind off, and you can learn all about it on Lucy's DVD "Double Knitting Delight". In the background you can see a bit of the tubular cast on. So they don't match, big deal. I'm done, that's the important thing! 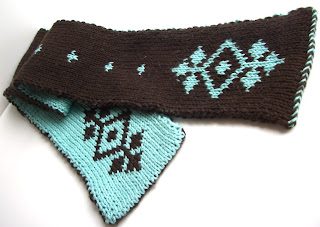 specs:
pattern: none, my own design (if there are enough (brave/insane) asking for the pattern I'll write it down, but not how to do double knitting)
yarn: Knit Picks Comfy, 75% Pima Cotton, 25% Acrylic, 109 yds/50g, used one ball of each, and a few yds of a second ball. This yarn is as its name would suggest, very soft. There will be no scratchy feeling around the throat. colors: Fedora (brown) # B118, and Sea Foam # B981
needle: 2 double point 4mm (US 6)
size: 4" x 37" just long enough to cross it in front and tuck it under your jacket.
destination: it was meant for DH, but now that it's so short, I don't know. Might keep it, because it was a pain to knit, only I will understand. 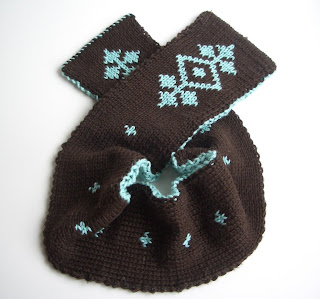 So, now that I'm free, what was it I wanted to do? I've only my pot holder on the hook, which is my outside crochet thing to do, which grows slowly, since outside I have other things to do as well.
I'm waiting for yarn to arrive, just two balls, but special ones, for a birthday present. While I'm waiting I might cast on Queen Ann's circular shawl, with the yarn I frogged from the Elses shawl. And there's the yarn I already have ready for a sweater for myself. This still frightens me a little, have to swatch, but I need some time to take heart to tackle this one. That's what I want to do right now, I guess QA shawl here I come. Oh yeah, and I've been spinning, wonderful thing that one. So relaxing. Everyone should try it. ;o)
Posted by Monika at Sunday, May 18, 2008

What a beautiful scarf!
It's fun to try out new techniques, but I'm with you - I do not like double knitting. I started a potholder once, never finished it. You did a great job on your scarf and I applaud you for sticking to it.

The scarf looks very nice. Can't wait to see what you do next.

It's a wonderful scarf and the colors look great. I'm glad you tried this method because I've always wanted to try it too (but now I think I will try it on a small project - maybe a baby hat).

I love your design and color combination. I definately think you should keep it for yourself. It might be a pain to knit but the FO is really lovely. Thanks for the reference on DK.

It's beautiful! I love it! Hugs to Sam and Biko!

Your DK scarf is gorgeous and I so appreciate all your hard work. DK(with a pattern) is not easy! Love the color combo too, just lovely :)

well done!
beautiful work!
i did try DK once, only once. it is a pain to do,i might try it again...some day.
happy long weekend!
helga

I'm admiring your patience. I think I would have it unravelled to get it out of my mind and UFO box.
The result is worth your efforts.

Good of you to finish the scarf anyway. It is a lovely scarf, nice colors. I guess you can be very proud on yourself!!!

Sorry, that was me, forgot to fill in my name...

Oh, la-la! That is quite lovely, plus I adore the color combination. Hooray for you, sticking to it and finishing!

Sometimes it's hard to come up with a "inbetween project" before you cast on the next big thing. I'm still planning to make the argyle double knit scarf fromt he SNB book.

The scarf looks really cute. I totally understand not loving double knitting. Great effect, but not fun. I saved the Queen Anne shawl after seeing yours on Ravelry. It's very pretty.

It might have been a pain to knit, but it's very pretty--I love the color combination and the pattern.

I am in awe! It is such a beauty! I applaud your stick-to-it! I know how it feels when a project bogs down because you fall out of love with it over technical stuff. Huge kudos to you for finishing it! Excellent job!

Oh you are so talented!! You do so many different things I am in awe!! Love the turquoise and chocolate brown together. Looks fabulous!!!

Oh, that scarf turned out beautifully! Will you make a matching hat?