Still not well, but still knitting! 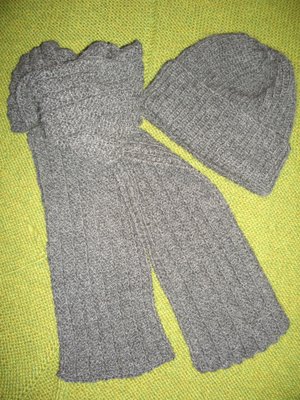 It's always nice to be asked to knit something for somebody, rather than knit something and look for somebody who might want it. David asked me nicely to make him a hat and a scarf and I happily agreed to do it. I've used Berroco's Ultra Alpaca which I had as soft in my mind, but as it turned out it's still scratchy, just on the border to not being able to be worn. Whew! The hat is a simple K1, P1 rib all around. The scarf pattern, which looks really nice, but is hard to see on these pictures is from the Yarn Harlot herself. She made hers with her awesome handspun. I absolutely adore the color (green/yellow/orangey) very fall like. The stitch is a one row pattern, easy to remember, but also getting boring about halfway through the scarf (but that's with all scarf patterns because scarves are just too long). Anyway, the green background is my Moebius vest. The back is finished and the right front too. It's coming along slowly but surely. You should see the color on a sunny day (today there's nothing but rain). It's also Berroco Ultra Alpaca and called Pea soup mix (I think) I love it. Better pictures to come. 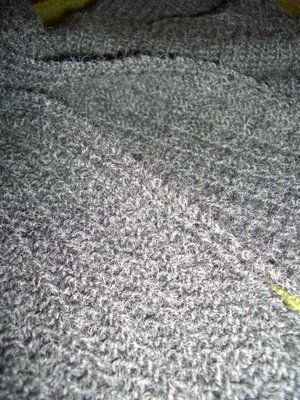 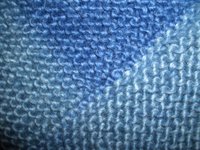 A few days ago I made this multidirectional neck warmer (pattern by Iris Schreier). I've got the pattern for posting a foto of the cashmere scarf (Karl's). I've worn it the last few days. My sore throat was gone within two days, thanks to garlic, thank you very much (and honey and tea, I suppose). In it's place I've got some cold sores now. Yeepee!

The blue picture on the right is a closeup of another multidirectional triangle scarf I've cast on this morning. Hold on, I know it sounds crazy, but I wanted to show Larry how I figured out a nice way of ssk's. I haven't used it in a while and it didn't turn out that well with the Diamond Chevron Scarf (middle), but it was bugging me, so I've tried it and now it looks great, no ugly bumpy ridges. The yarn is Patons SWS denim. I'm not sure how soon I'll resume knitting this scarf. Have to finish so many things first and a million new projects are swimming in my head (which is fuzzy anyway). 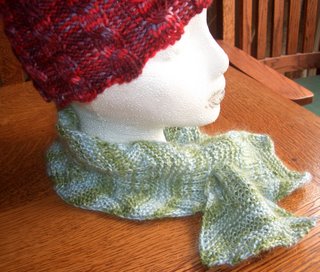 And I leave you with poor Sammy. He's got cold sores too! You can see one by enlarging the picture (if it works).

So how do you do this different ssk?? I find the bumps very annoying too!!

i seem to be on a roll with the remedies.
for cold sores, nasty things, Lysine. cream and/or pills. oil of oregano. comes in a lip balm thingie. easy to apply and it WORKS ! toddle over to your nearest healthfood store and get better soon!-:)

The grey scarf is lovely! I have Yarn Harlot's pattern on my to do list right now. It does sound like such an easy pattern.

Wow, the hat and scarf set looks so amazing - the yarn looks every bit as soft and cozy and warm as you described it to be, and the color is definitely the perfect one for a guy! Fantastic work!