Rainy days are good for FO's! 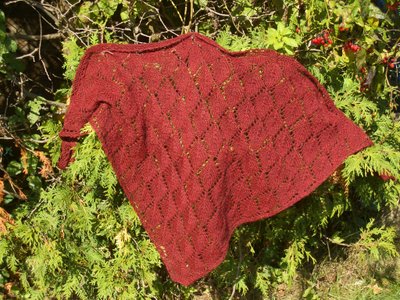 This is a shawl I made for my grandmother. I found the pattern in "Lavish Lace" by Carol Rasmussen Noble. It's called "Falling Leaves" and very much a pattern for beginning lace knitters, which suited me fine. The pattern repeats were easy to memorize and with the yarn I chose, it went fast. Speaking of yarn, it's not the usual lace knitting kind. I've used Peruvian Pure Alpaca with 4.5mm needles. It's real "hairy" and I had my doubts at first. But after washing and blocking it, it had the greatest "feel" to it. Just the right drape and softness. It could have been a bit larger, but I ran out of yarn. So it's 28" by 54", good enough to cover your shoulders. I hope Omi likes it! 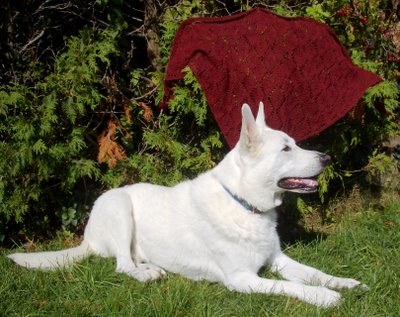 close up of the stitch pattern 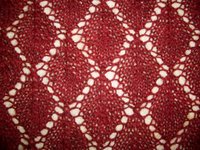 Sam was pleased with the outcome, but would not pose with the shawl around HIS shoulders. I've tried Biko, but she said "Hell NO" and off she went. 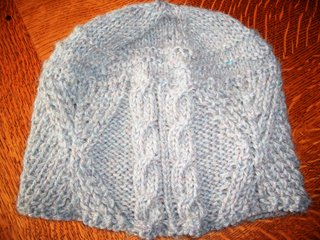 this is a picture before felting

This is the fishtrap cap from Elizabeth Zimmermann's Knitter's Almanac (remember Zimmermania KAL?). I loved knitting that one. Although it was too big for all our heads in the family. I decided to felt it lightly, but David saw me doing it and he wanted to have a go at it. Well, we both enjoyed the rubbing and squeezing and after we were done it was too late. There's a thing called "over felting" I'm sure. I pulled it in shape and put it out to dry, so now it looks like a bucket hat. Maybe Hannah will wear it?!

I've used Peruvian Pure Alpaca double stranded for it. Same thing as before, so very soft, I love this yarn. 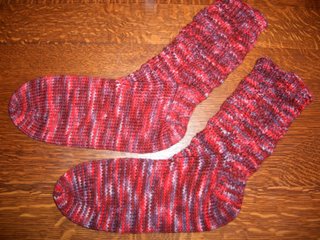 pattern: Flow Motion socks by Cat Bordhi (VogueKnitting Fall 2006) - if you have this magazine you've got to try these, it's well worth it.
yarn: KnitPicks Bare, selfdyed
needles: 3.75mm
This is the second pair of Flow Motion I've knit. I loved it and now I'm moving on. Unfortunately you can't see the lacey legs and the construction of these socks, but believe me, they are great.
I should also mention that there is an errata sheet at Cat Bordhi's website, which makes knitting the socks much easier.
One more thing: row gauge is VERY important here! If you use different yarn (like I did) in order to get the right length of the foot, you have to watch out for the row gauge. Just saying.....
Posted by Monika at Wednesday, October 04, 2006

That shawl is darling.

Overfelted? How does it look? At least it'll be warm. It looked a lot better in your pic than it sounds! Fishtrap.

WOW! You have been quite productive! The shawl is just beautiful.
I have the magazine and I want to make the socks - I love Cat Bordhi (she is my circular sock knitting guru).I will have to wait for a little while though because I'm struggling with the Traveler's Stockings - they are going to take awhile.

I can't believe how busy you've been, and so productive! The shawl you did is so very beautiful, what a gorgeous pattern, and I totally love the color of the yarn you were using! It's amazing - the perfect shawl, I'd say! I also like your socks a lot, as well as the cap! Wow - I'm stunned and way impressed!

Your Omi is going to love her shawl! You've also got me curious about the Cat Bordhi socks and look forward to looking at the pattern tonight!

Wow, you are such a productive knitter! Love the shawl and the cap; I think it looks good felted.
The socks turned out great with that yarn you dyed!

Beautiful shawl! That color is gorgeous.