What a disappointment this turned out to be. I'll never, ever buy this yarn again, I'll not even take it for free. I still have three balls left. Maybe Hannah will use it someday. Anyway, some time ago, I was thinking of a scarf pattern, I like chevron very much, so I've tried out different ways and came up with this one. I really like it and with any other yarn I would have been quite happy with it.
At first I liked the color changes, the first ball was O.K.. It stared out quite conform, same thickness, as you can see on the left side in the picture below. The second ball had knobs in it and at the end of the second ball there was another knob and a sudden change in color, which was not in the right position and after this dark blue there was not even a knob any more but just a little bundle of yarn. I through it away. The third and last ball, the same. Sometimes the thread would be thin as lace weight and thick as unspun roving. I HATE THAT! If you look at the balls with the ball band on, you can't really tell that it is a thick and thin yarn. At the end of the third ball, again the sudden color change and the last 5 yds were loose and disconnected. Also the colors in the second and third balls looked kind of dirty/muddy not as vibrant as the first ball. Enough said! Despite of all this, I'll knit another one with this pattern soon. As I said, I like chevrons. ;o) 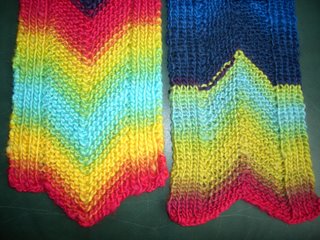 Here are the specifics:

This scarf is nice on both sides and if you still would like to give it a try, I've posted the pattern. You can find it on the side bar, as usual, under FreePatterns. Have fun!

I'm also going to finish my vest today. I'm almost done. Have to find the right buttons for it.

No matter how horrid it was to knit with, it does look good.

Sorry about your yarn disapointment - The scarf looks pretty from here!
I've wanted to try some soy silk, but I guess it won't be this brand...Thanks for the heads up!

Ooh...sorry you had a bad yarn experience. I was considering trying out this yarn at some point, so I thank you for the warning. The scarf does look lovely, though.

Well you've come up with another great pattern! Your scarf looks lovely and I like the colors. Sorry you had a bad yarn experience - that does happen once in a very great while :)