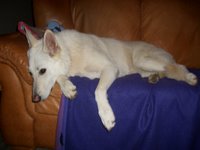 Lets get the important stuff right out of the way. Biko and Sam, both exhausted from a hard day of playing, relax in front of the TV. She's a real couch potato and melts into the furniture. Sam has his special place and was not too happy about the flash light. How can I be so rude to wake him? Anyway.... 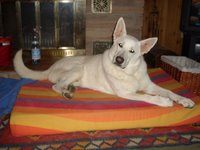 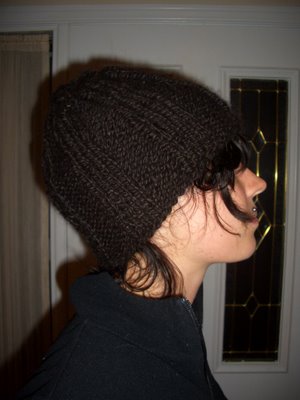 Since in our house you can not sit down without having to worry about needles in your six, you will get the urge to take them and do something other than through them across the room. Well, Hannah got the urge and asked if I had some black yarn. The only black wool I had was the one my secret OneSkein pal sent me a few weeks ago. She wanted to make a hat (and did so). Hannah's always fast. Casting on was done while standing and with a little help from good old mom she was on her way. She had a pattern, but didn't bother to read it carefully (a quick glance was enough), naturally the ripping followed. Long story short, as you can see, she's wearing her Alpaca hat in black! For some reason the dogs where very interested in this finished product (while it was still on the coffee table). They usually don't bother at all with my knitting! 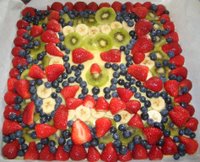 On the left the fruit cake ;o) for Chris's party. Can you see the skull?

And on the right is Chris (Hannah's boyfriend) with his birthday socks, knit by - moi. They fit even on his spindly legs. It's like walking on clouds (color or softness or both?) I ask. 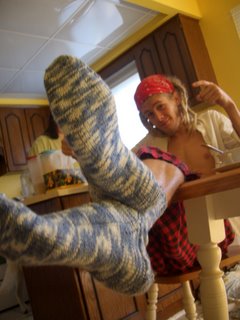 Why is it that I spend so much time online, playing with the dogs and do anything but knitting lately? I can't figure it out. Maybe there are too many projects in my head and on the needles, that it makes me paralyzed. Don't know where to start first. Should I knit here a little, blankie? Lace? Ahhhhhhhhh! Thank god the young'ens are away for a few days, so there'll be some peace and quiet around here again. ;o)

Have a nice productive, relaxing weekend!

That fruit cake is so cute! What a great idea. And that boyfriend is one lucky guy - not everyone gets handknit socks ... and from his girl's Mom, no less!

Your dogs are so darn cute. Look at those faces!

The fruit cake is a good idea but I couldn't get a skull out of it. Probably failure of imagination on my part.

Good luck on knitting more, Monika! You're probably just in a slowdown mode after all that you've done lately. It'll go away.

So cool to see the baby alpaca all knit up. From the fiber fair of Indiana, to my wheel, to Canada!

I sent your final package the other day hope it gets there soon.

hi monika,
you made such a lovely jacket for hannah, lucky girl, why not make something for yourself now.
remember winter IS coming,bbrrrrr... how about a big warm snuggly jacket?
do you have elsbet lavold's books. i will look up the title of the one i have in mind. there is a beautiful coat-jacket, made out of lopi.
perfect for inbetween seasons.
if not, enjoy the respite from the knitting madness.
what are you reading?

Happy belated Birthday, Chris! Wow, that fruit cake looks so yummy - and what a great idea with the skull! Love the hat and the socks too!