Bunny Love - it's got nothing to do with Easter!

Another blog post so soon, you ask? I'm snowed in, what else should I do? I've spun, I've knit, I've done many other things, and now I'm bored. Don't watch TV, have nothing entertaining to read, was playing in the snow - several times, so there you have it: Bunny Love! 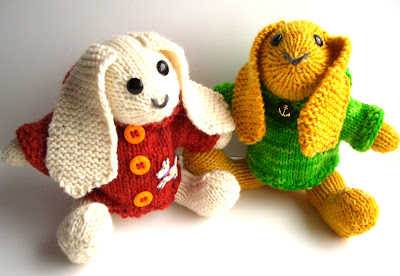 Meet Wilma and Fred.
Fred came first, but the real Wilma made me choose those names, for my Bunnies with Hoodies. It might have nothing to do with Easter, but I think it's no coincidence that I saw this pattern chequed on Ravelry so many times. I fell in love with the ears first, than came the tail, and of course the Hoodie! What a lovely, and simple pattern (not free, but worth it). 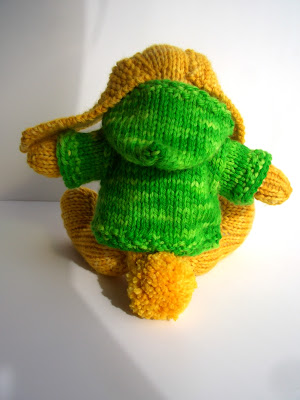 Pattern: Bunny with Hoodie by Barbara Prime
Yarn: 100% worsted wool: for Fred: turmeric dyed yellow, and Easter egg color green dyed by me; Wilma was made from Peruvian Highland wool.
Needles: 4mm
Size: sitting 7" high
The hardest part were the faces. I liked Fred's face right away, but had some issues with Wilma's. We were on our way to the Vet, when I blurted out "I'll rip her eyes out.", which startled my son, who thought I was talking about Biko, the reason for another Vet visit. Well, I thought that was hilarious. I redid her nose too, Wilma's that is. Biko's fine, just had us worried, because once again she must have done too much, but she's getting better. Almost as good as new. :o) She's had her last steroid pill on Saturday, and by Tuesday, the Vet promised they would be out of her system. I hope so. She's stalking me, when I go near the kitchen, and she's eating EVERYTHING!
Of course nobody could keep us from romping through the snow, with sunshine that bright, and snow up to our knees! 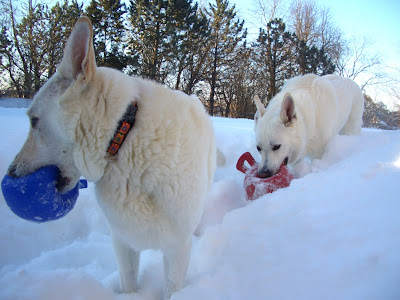 To get back to the bunnies. I'm still very much Kitchener stitch challenged. It's the part I don't like about knitting toys. I wish they were knit more in the round.

That seals it! I have been eyeing the pattern for a while now. Like you it was the ears that got me a first. After seeing yours, I'm off to buy the pattern.

I had a lot of reading to do at your blog. Just a few days and 6 logs behind.

I love all the things you showed. Glad to read Biko is getting better and better.

And all that snow! Here in the Netherlands spring is a whole month earlier. No snow at all, just some little wet flakes last week, nothing to get exited about.

I just love the bunnies!!

awww how cute!
Good to see Biko out and about again! And of course Sam with his ball :)
I can't believe how much snow you got! We just got rain and now all the snow is almost gone :(

They are sooooo cute. No wonder you had to make them. Are they going to multiply like rabbits too?

So cute. About a year ago I bought a kit with Schaeffer Lola yarn to knit "lola" a bunny. The yarn just didn't look like any bunny to me when it arrived - so it just sat neglected. Now I'm thinking I might get that yarn out and knit me a bunny after all!

Those bunnies are so cute! Love the colors you picked. Wish I could knit small items like that.
The little green hoodie is the best!

Maaawwww! Hello bunnies! Reminds me of a funny story: walking around town with the husband one night and we smelled something nice coming out of a nearby house. He told me they were making 'bunnies with sugar'. Bunnies! No! Turns out he meant 'buns'. Tee hee!

But love your sugar-sweet bunnies.

They are so cute!
Now I just have to make some too ;)

Your photos are great. So bright and cheerful. And the bunnies are adorable. Boredom can produce wonders when we let it. Glad Biko is better.

A newbie to your blog. Love the snow we're just getting loads of rain and wind in the UK

Wilma and Fred are very cute! They certainly are hard to resist making.

They are so cute! Love the little hoodie.

That would be a strange thing to blurt out and could probably freak a lot of people out. :)

I am actually a sick person who likes Kitchener stitch. Go figure.

I LOVE your bunnies!! They are the cutest little things.

Adorable bunnies and soooo cute hoodies! I love seeing your snow too!

Isn't that pattern wonderful? I'm glad you discovered it. I found it last year and made an alpaca one for a friend last May. No hoodie: no time. Still one of the most enjoyable things I've ever made.

Glad your white dogs like the snow so much, and that Biko can enjoy it. Our older dog loves snow; the younger one has learned that it's not horrible.

Those bunnies are so sweet !I guess you've got Easter and Spring in mind.Love the pictures of Sam and Biko in the snow. Reminds me of Max's two dogs who are in their element in blustery winter weather.

My goodness those are CUTE bunnies!

Cute bunnies. I love seeing your white Shepherds in white snow. They are beautiful.

Adorable bunnies. If I didn't have so many UFO's I would want to knit one.

Those bunnies are just too cute!!! I love them!!!

How did I miss this post? You have the cutest pair of bunnies there. I am totally coveting Fred's green hoodie, too.