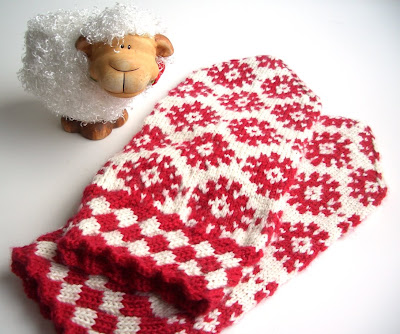 Everything has its time. I started the Kristi's mittens back in December as a gift for a friend (friend got a shawl instead). I went into this project with so much enthusiasm and energy, and right after i finished the first mitten, it left me abruptly. I have to confess, I don't like stranded knitting. I love how it looks, it's wonderful when finished, but doing it? - No thanks. Sigh. I have so many patterns I want to do, and still have the Tiit's socks to finish. The first one's almost done. I put them on my coffee table, so I can see them, and feel guilty enough to continue knitting, because they are next. I want to get them off the needles, to feel free to cast on something else, or several something elses.
Between knitting the first and second mitten, my tension changed dramatically. When finished the second was smaller, but I steam ironed them and now they are the same size! :o) They are not knit well enough to be given as a gift, so I guess I'll be wearing them next winter. For now I'll put them away in a drawer, and by next winter, I might like to see them again. :o)
Another thing, you'll notice the thumbs. You are supposed to decrease in pattern, but by that time I've had enough and used red only. I think it's a lovely mitten pattern, but I will NOT knit them EVER again. The next time I think I need to do stranded knitting, I'll be sure to find a motif, where there are not yarn spans over 11 sts. At first I twisted like a mad woman, but after a while I didn't care anymore. It was either that, or rip them out and forget about them. So here they are. 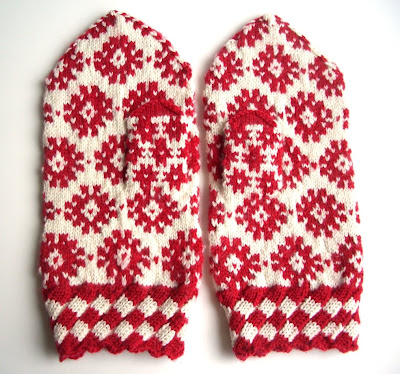 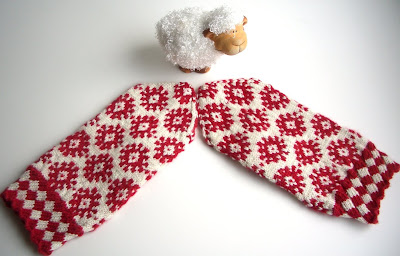 The yarn is not suitable for mittens. It started pilling still on the needles. Can imagine how they'll look, once I made a few snowballs, but done is done. Note to self, don't use that yarn for mittens (or socks) in the future.
Posted by Monika at Wednesday, March 12, 2008

Are both yarns pilling? I'm guessing you mean the KnitPicks?

You may not have enjoyed knitting them, but they are beautiful!

well even if the yarn does pill and they aren't your favs they are still super cute!!!!
Love the red and white together!

I am totally suffering from Bunny-Love from Wilma and Fred!! Adorable! And I LOVE the green from his hoodie!!
In spite of what you feel right now, these mittens are pretty nice looking. After all, it's projects like this that make us enjoy the Fred & Wilmas all the more, right?
I think it's only fair to tell you I stole your sheep and posted it on the sidebar of my blog - I couldn't resist! It's SO cute!! Thanks for sharing it!!

Well, they are very pretty, even if you didn't enjoy knitting them! But, yes stranded knitting is sort of fiddly on a small thing like a mitten. I had the same problem with some Regia 4-ply wool/silk pilling before I'd even knit two inches. It's soft, but I can't imagine how it wears for socks. Maybe it fulls a bit and settles down after a good wash though.

They sound like they were definitely a chore to get through, but they are so pretty, and I like your choice of colors.

They are beautiful. You did a fine job despite the problems with the yarn and the difficulties knitting them :)

Good to know about that yarn. The pattern shows up nicely - I'm sorry you think they aren't particularly nice. Off to the unloved knit item drawer. Perhaps when you take them out next Winter you will look at them and wonder what's not to love about these cute mittens!

In feel your pain, but the mittens do look pretty darn good. As a beginner in color work, I do check float length before picking a pattern. I guess I'm just a wuss. I don't know what I'll do if I can't see color work on your blog anymore!

They are very pretty and will keep your hands nice and toasty next winter. Doesn't it feel great to have them out of the way even if you didn't like knitting them?

they are absolutely beautiful!

They're really nice mittens. I don't do a lot of stranded knitting. I like it, but I'm all thumbs. Maybe if I learned the proper way to hold the yarns. (I tend to drop each one and pick up the color I need.) Someday I'd like to try colorwork mittens, but I'd probably go for something just on the top. I'm scared of the decreases in pattern in the top and thumbs.

That yarn pilled? Uh oh. It's going out of my mitten stash yarn.

But they came out so cute! Even if they drove you mad knitting them.

they really are lovely, although i would never want to do intarsia myself...

You may did not like making them but they are beautiful!!!

Sorry the mittens were not totally behaving, but they are really beautiful nonetheless! :)

The mittens are beautiful!!

Your mittens are beautiful......and I want that little sheep!