We had our first snowfall last night, and it stuck, at least right now, it's still crunchy underfoot! Our dogs LOVE snow as much as they hate rain. That makes it up for all those sizzling hot days this summer. ;o) 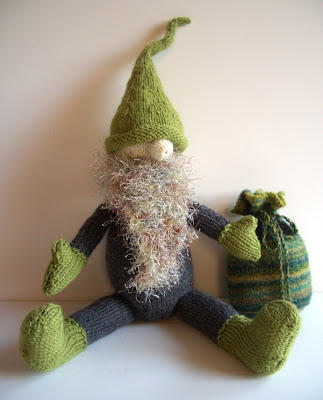 I had to get this little guy out of my system! I've been wanting to knit this Gnome since I first saw it. It's getting harder to take pictures, even with daylight, but with bad weather it's really hard. 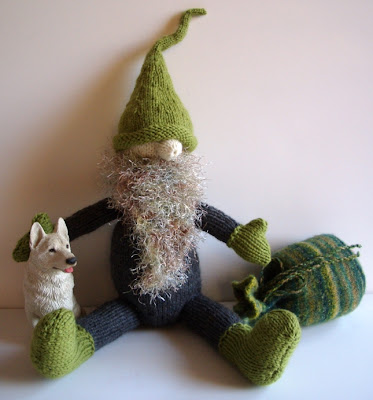 The pattern gives you directions for three sizes. I made the largest one (it's 10 inches high, sitting, without the hat on) , shouldn't have though. Hat, beard, boots, and mittens are all the same size for all three sizes, so I had to knit another beard because the first one turned out ridiculously small. It's still not long enough, but it'll have to do. 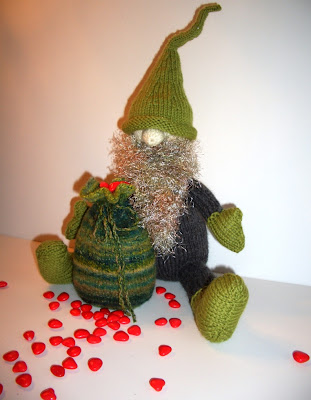 Cinnamon hearts, a whole bag full of those! Oh, the bag I made with my leftover yarn from my first hand spun sock yarn. I put it in the washing machine to felt it, but it didn't. I put on some rubber gloves and had a go at it in hot water, rubbing away, and it took only a couple of minutes to see it felt in my hands. When I turned on the cold water tap, and let it run over the little bag, I swear I could hear a shriek of "Brrrrrrrrrr", it shrank instantly. ;o) With that I've used up every single inch of that hand spun, hand dyed yarn. That's a proud moment. 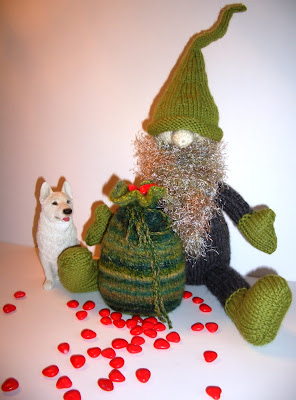 For the Gnome itself, I used Patons Classic Wool Merino, maybe a little too heavy for this project. I'm planning on making the medium sized one, but only the stars in the sky know, when I will get to it. ;o)
The pattern is by Alan Dart.
I wish I had a little guy like Hege's son, who would love my Gnome like that!
Oh well, I like it, that's good enough.
There's a new picture of a pair of Kyla mittens in my Readers Gallery, love the color Fredabeth used. ;o)
Totty Teabag left a comment, and look what I found out!!! We both blogged about the same gnome on the same day, and I love her gnome. She used both my favorite colores! ;o)
Posted by Monika at Wednesday, November 07, 2007

How adorable!! I love the gnome. And with a little Sam or Biko right beside it. That's cute!

Your Yuletomten is fabulous!!
I should really make one for my mom for Christmas. She always used to tell my dad that he looked like a Yuletomten, with his button nose, round belly and white beard. She'd love this. Thanks for the link, now to find the time. . .

I just love that gnome. My boys would be so very into him. Guess I'll need to send away for that pattern. Thank you for always showing such lovely pics.

Well now if he isn't the cutest little gnome I've ever seen!!
(I wish I had used a nice solid color like Fredabeth for my Kyla - I may have to make another pair!)

How cute is he? He looks perfect all in green. Love his beard...

The gnome is adorable, but I find the pattern pricey. Cheers
Gillian

How adorable! My mother would love that. She collects stuff like that, specially anything that looks like santas.

I love it! He's soooooo cute :) I'm so jealous that you have snow. We're still sweltering in So Calif. I also like the Kyla mitts in the solid color - shows the pattern so well!

That is SO cute! And I love that you used up every bit of your handspun - that's important!

He looks great in shades of green! I found it easy to knit him in the round; knitting the legs like toe-up socks, and the arms like top down mittens.

He looks great in green!
here in Norway we have "blånisser" which are blue gnomes. It's a advent story for the kids. So I think I'll knit a blue one too ;)

So very cute! I wish I had one. I might just have to knit one up.

OK, you did it. I should have known if anyone could sway me you would.....I'm not a doll person, I don't have any, I don't want any, but OMG that gnome is fantastic!! Now I've GOT to knit one myself. :o)

I know how you feel. I had to make two of them last year myself. One looked like Santa and the other I named "Barbarossa". Any idea why?

I love that guy - he's so cool! Arlene

I love him! I love his bag of candy.

Yeah, can you believe that snow already! But that always happens around here, doesn't it? A bunch of harmless flurries in November, and then nothing real until January. But we get a bit more at my end because of lake effect.

I love your gnome. He really is cute and extra special with your hand spun yarn accessory!

That's way up there on my list of cutest knit things I've ever seen ... totally awesome!

What a cutie! I love it. I would say I will make one too, but I know it wouldn't so I will be content to compliment you on yours and gaze at it longingly. Love the little treat bag, too.

I love your new little friend AND his handspun bag! :)

That is the sweetest little gnome , not to mention his sidekick . It's always a pleasure to visit here and see what you've been up to . Brought a smile to my face ... thanks

I love your little man!!!

i am so going to have to get the pattern and make one for our realtor. she collects garden gnomes (she even "gnomes" her clients when the sale is done...jerome sits on the window sill over looking the garden until spring). she'd love one!

That gnome is too cute but it's your Kyla mitts that are really adorable.

Monika, how cute! "Yuletomten" is new to me--I'll have to check it out.

He is adorable. Very nice job. I love making toys.

Oh my! That is the cutest gnome and his handspun bag is just perfect! He is adorable!

I just love the gnome! He's on my to do list. I've had the pattern tucked away for 2 years and everytime I'm ready to knit it, I can't find it. Wish me luck for this year.

He's amazing!!! I love him!!! That felted bag is a great idea for using handspun; I wonder why it wouldn't felt in the machine?