All is forgiven, when he does things like that... 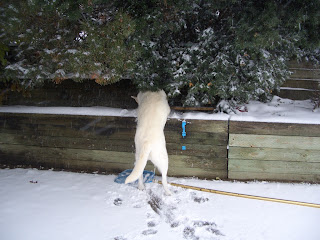 O.K. - I had to share this. Sam woke me up at 5 AM because he had a late night snack, and it wouldn't agree with him. I stayed up, no point in going back to bed, when my spinning wheel was ever so softly calling my name. Outside, we had some mild freezing rain. Inside, warm and cuddly. Later the same morning, around 9AM, I opened the door to the backyard. Sam jumped outside, followed by Biko. He paused, looked at all the snow, and turned left! That's right, I freaking can't believe it! Why you ask? See what he's doing? I put his snow shovel there, out of reach I though. He never goes and gets it, when we are outside, unless I give it to him. 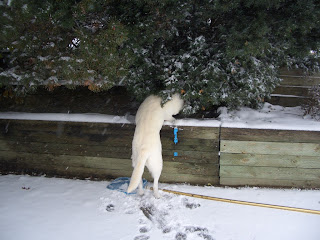 He made moaning sounds, and worked hard for it! 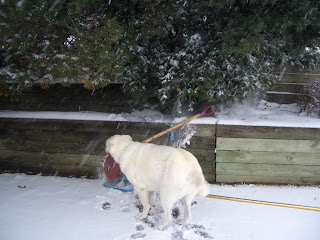 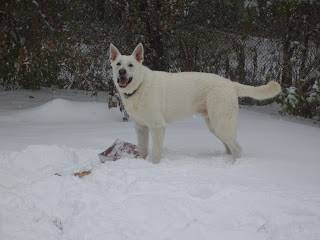 Happy, and proud Sam, yapping it out loud for the whole neighbourhood to hear!
Biko just watched him, cool as a cucumber, and brought me her tennis ball. By then my fingers were frozen, but we played a little. 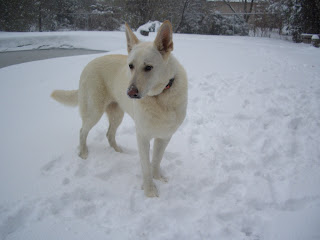 I love my dogs!
Happy Thanksgiving to you folks in the US! Don't eat too much Turkey! :o)

What a wonderful post. I understand so very much about the deep, abiding love you have for Sam and Biko. They're quite the pair. I can also tell they love you, too. Nothing like it in the world.

i adore your dogs. they are the funniest pair!

yes, turkey...we will eat plenty, but not so much i can't eat a slice of each of my three pies. ;)

Is he playing with the shovel or is that a hint for you to start clearing the snow away? :) We have a 18 pounder in the oven to get rid off. I'll eat a piece of pie for you :p

Awww...how cute is that! He wanted to shovel the walk way for you ;D. My Mikey woke me up with persistent thumbing on the door. Ah, a morning snuggling with a loud purring in your ear with a cold wet nose on your neck.

My cat's sad that I'm not making chicken (his favorite), but he'll live. He get's his own plate for thanksgiving, so he really doesn't complain that much.

What a sweet story, and what a funny dog.

Thank you!! Dogs are so clever. They definitely have insight, it's not all Trial and error. Sam loves that shovel!! Great pictures. Happy Snow!!

I wonder what the attraction is to a nasty, sharp shovel? Oh well, as long as it makes Sam smile! :)

Oh, that is SO cute! I'm glad to see that they're both doing so well lately.

Sam is so cute! (and so smart too, to find that shovel!)

I love it when you share the weather and how it "feels" to live in the snow. Shephards are such bright dogs - Alex (our German Shephard) used to run circles around poor Mr Puffy.

Oh they're so cute!