Let me, before I forget again, thank you all very much for the well wishes for my Omi's Birthday! I think she'll be surprised to get a pair of socks in the mail, now, that all the festivities are over. 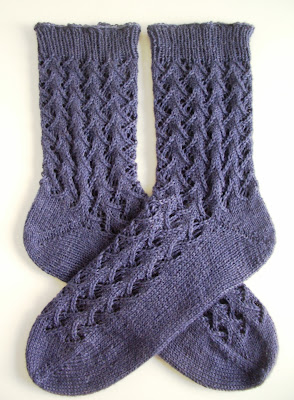 I loved making these socks, first, because I made them for her, and second, the yarn is so very soft and squishy. Here are the specs:

I made them toe up with Judy's magic cast on, which is my all time favorite. I like how the stitch pattern looks, but as usual, by the second sock, the pattern was getting a little on my nerves. The good news is, it's easy to memorize. I think the pictures show the lilac color quite well. To have comparison I've included the baby blue balls, same yarn. I think I'll make some fingerless mitts fwith these. It's not really sock yarn, but as I said before, since my Omi is not going to run around in sneakers with these socks on, they will do just fine, warming her feet. 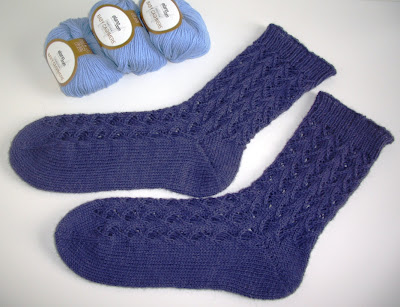 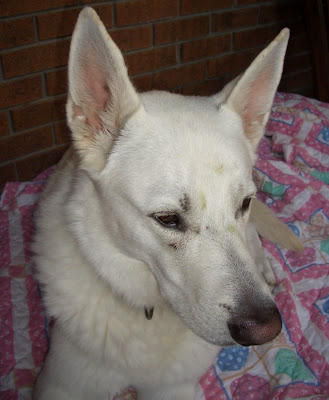 Sam's got a run-in with a fir tree. There was blood running down from a gash under his eye. Hot read blood on his white fur always makes me panic. So after I tended to his wound, I had to take a picture, because he's got some green spots on his forehead as well. Of course, he didn't think it was funny! ;o)
(you can click on all except the last picture to have a better look) 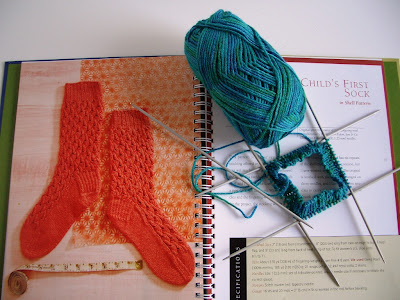 My sweater hasn't been touched in days, I'm afraid, but I left it out in plain site, so my guilt can grow a little each day and will make me work on it again, soon I hope.
In the meantime I've been spinning, and I've already cast on for my next pair of socks. They'll be for a dear friend.
I'm so bumped out, because I've still not received my Cat Bordhi sock book. I've pre-ordered it, and I think I'll never do that again. It's supposedly on it's way, 14 days now. I'm normally a very patient person, but I was looking forward to this book for month, since it was first to be released sometime in May? . People all around are talking about it already, and I feel LEFT OUT! O.K. rant over. Can't do anything but wait anyway. And knit socks from other sock books. Hrumpfh!
Posted by Monika at Wednesday, August 15, 2007

What pretty socks! I'm on the second half of the second sock in that same pattern, and I will admit that when I picked up the instep stitches and began the repeats again, I groaned a little, too. But it is a lovely stitch, isn't it?

Hope Sam is better soon, and not so colorful!

There I was bummed out because I did not pre-order my book! Lost the chance for 34% off. sigh! Hope your copy comes in soon! I will be eager to hear your review of this long awaited book! Hugs to Sam and Biko! Too bad about that run in with the tree! As they say to George of the Jungle "Watch out for that tree!"

I liked her hat! The blanket was gorgeous..I'm surprised it was so big. You see it spread out on the floor, but once it's on a person you see how big it really is. I was out with a bum ankle so I'm sorry if I forgot to wish her a happy birthday. The socks are gorgeous too! Hmm..maybe that's what I should be doing..putting ice on my ankle and knitting socks. Sorry about Sam's run in with the tree. I hope he feels better and gets his pride back. :D

Poor Sam I know he is wondering what in the world happened!

Cat's new book is well worth waiting for. I made some stitch markers letters to use for some of the more complicated versions. I am going to do as suggested though and make baby socks before hauling off and making a bigger version. I will just have a present in waiting that way.

I love the blanket you made too. Your daughter is very lucky.

Sam looks a little embarasssed. Tell him the trees won't move for anyone - it's not just him! Love how the socks came out - such a nice pattern.

Poor Sam ! That must have scared you ; too close to the eye for comfort. Love your crosshatch lace socks and the colour of the new socks on the needles .

My Timber is forever sliding into the trees that surround our house when he is chasing the tennis ball. He comes out scratched, poked or limping. He's even bitten his tongue! He is insane for the tennis ball. Hope Sam heals up quickly.

Beautiful socks! I know she will love them. Poor Sam!! Milo sends his best wishes for speedy healing. I have Cat's book already. It's going to take some studying, that's for sure. New concepts, new structures. I'll be interested to know what you think once yours arrives.

The socks are beautiful!

Wet doggy kisses to Sam to get better soon.

your Omi's socks are just lovely!! Poor Sam...give him a smooch for me.

What lovely socks for your Grandma. She will love them :-)

wow you knit those socks fast and they look great! er how exactly did Sam run into a tree? :)

I LOVE those socks. I've been wavering on the Crosshatch pattern for months. After seeing your socks, I'll definitely make a pair!

Poor Sam, he looks very sorry for himself. Pale dogs show up grass and vegetation stains a lot. Hope he is feeling better soon. Lovely socks, as usual!! I love the colours in the new socks too!!! Hope your book comes pronto.

Beautiful socks! Your grandma is going to love them :)

Love your socks! I'm currently working on the embossed diamond pattern from MSKS and am really impressed with myself. Mind you, it's 80 inches on 2 mm needles, so I've got one done and am taking a break before starting sock 2.

I hope that Sam is doing better after the run in with the tree.

Those are GORgeous socks! Your Omi's gonna love them. I really want the new Schurch book.

Poor Sam! Kiss his poor battered nose for me and tell him to watch out for those darn mean pine trees!