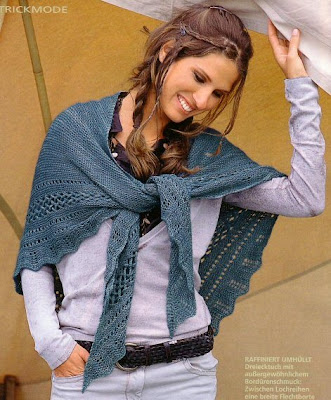 There is a German magazine called ANNA, and in the September issue there is this beautiful triangular shawl designed by Lotte Wackerhagen. I saw it, and I had to have it (the magazine and the shawl). My dad was so nice to get it for me and sent it over. I like the shawl as it is, it's rustic look, but I don't have the same yarn or anything in blue at all in my stash. You can purchase the kit at Wollsucht, a German online store, by the way.
edited: Many asked if this pattern is available in English. As far as I know it's not. I think you can get it at Karen Noe's website, which is in Danish, and at the above mentioned online store. The magazine ANNA is written in German. I've asked Karen Noe about the pattern via e-mail, and she just told me about Wollsucht.de. Sorry, that I can't help you English speaking folks. Maybe if enough people send her an e-mail and ask for an English translation, it might motivate her to do a translation.
edited August 30th: Judy left the following comment: "Hi, I just got a reply from Karen Noe about shawl pattern. She said if i want to buy yarn she will do a pattern in english. Thought you might like to pass this on. " Judy Boddy
I'm going to go with this colorway from Koigu though, which I already have. Since it's mainly a garter stitch shawl I think it will work with the multi colored yarn. The challenge will be the braided part, I'm scared of it, but I'll know how it goes, when I get there. 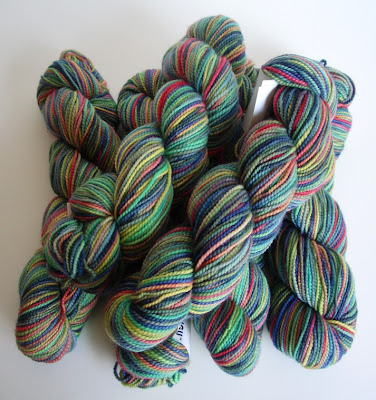 Heike set up a blog for this Knitalong, which will start September 15th. That leaves me with time to finish other stuff first, but I suspect that there will always be something on the needles until I actually start knitting the shawl.
None knitting related, but cute and funny is once again, my Sam. Some time ago I taught him to return yogurt container, which I gave him to lick clean. He's very food oriented, so it was fairly easy to train him. This is organic natural 2% fat yogurt he's cleaning out here, but he doesn't care which kind he'll get. 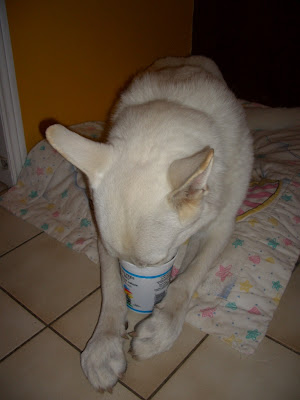 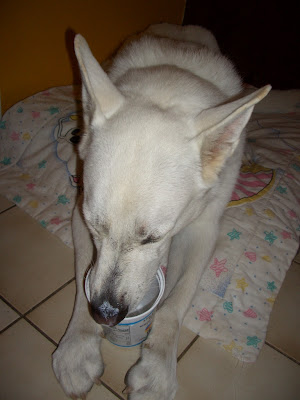 Afterwards his face is all crusty when the yogurt dries, and he doesn't like his face to be washed, but everything has a good and a bad side. ;o) 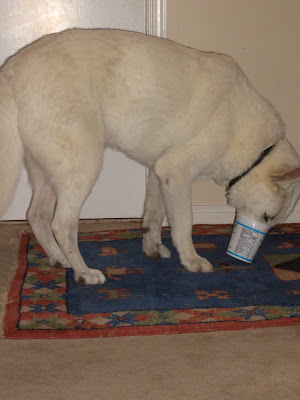 What I actually trained him to do is, return the clean container to me, so I don't have to pick it up where ever he dropped it. That's so funny, because everytime he brings it back, he thinks I'll give him a refill. In the picture below he was quite frustrated, because he held it out to me several times, but I was busy taking pictures, so in the end he just dropped it in front of me and "yelled" at me. 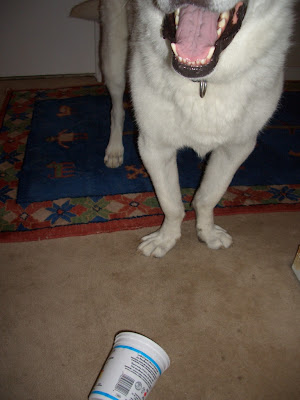 I would love to train either one of them, but I think it has to be Sam, because he's up with me in the morning, while Biko's still sleeping, to allert me when the tea kettle is boiling. I put it on the stove and go sit in front ot the computer, and naturally forget about it quite often. I've ruined one already, burned out and all. I wish he would tell me when it's time to get it off the stove. No clue how to go about that, though. As it is, he's happily sleeping in the kitchen to the sound of the steaming kettle.
Posted by Monika at Sunday, August 26, 2007

Lovely shawl! I know the Koigu will do it justice. Wolfie used to love to clean out yogurt containers, too. So far, not so much for Milo. Of course, he'll clean out just about anything else.

Beautiful shawl pattern and beautiful yarn to knit it with. I bet Sam would be very happy to wash all your dishes for you ;)

That shawl is gorgeous! Right up my alley! Oh how I wish I had the time. . .

The shawl is very nice: in my younger years I had quite an Anna, Sandra and Burda collecion!!! I like the colour you have chosen, I think it will look great.Sam is so funny!! I love that he gets it all over his face and then wants more. harki loves the end of the cup of tea and sits and looks very pountedly at the cup if I forget. I have taught her 'Can't reach' so she will pick thimngs up and bring them closer to me!! Peri looks at me very happily, but she has no idea what is going on!!!

First of all, your shawl will be absolutly gorgeous! I can promise you that.

Second, Sam is a doll. I think it looks like he is smiling in the last photo.

I think the koigu will great for the shawl. I'm looking forward to seeing it and the braided section.

LOL that's a great trick. I can't wait to see the shawl I love the braiding!

The colors will look wonderful. And I am sure with all the beautiful things you make, you won't have one bit of trouble.
:)

I've never come across the Anna magazine before....

And dog and yoghurt? LOL

That shawl is gorgeous and the Koigu is a great choice to knit with. Look forward to seeing it all finished.

This the second time today that I ran across this pattern. Is that a new epidemic? How can we get the pattern only, without the yarn in time for the cast on?

Ditto to all the comments on the shawl! You have a great eye for color - I just know it will be fabulous!
As for the kettle - get one that whistles! My inattentiveness in the kitchen is legendary! I have been officially forbidden to cook rice in a pot now. My DH bought me a plug-in rice steamer - no more burned pots!

I have not wanted to knit a shawl before, but this one is just beautiful!!

What a beautiful shawl, I just love the koigu you've picked out!

Oh I so wish I could speak a second language right now. I've found so many neat patterns that are offered in a different language..(french, swedish, german).

Awwww...Sam is so cute! And eager to learn! I've tried teaching my cat stuff, but it turns out the only one being taught anything is me. Gimmie food! Or Move over so I can sit in your already warm seat!

That's going to be a wonderful, wonderful shawl. I am already in a Clapotis KAL starting Sept. 23rd or I would be joining along! I actually like Koigu better for shawls than for socks. Sam is too funny - I particularly am amused at him yelling at you - such cheek!

Would like to know if the shawl pattern is avaible in english and is the magazine in english ? Would love to have the pattern if you could help, Thanks so much, Judy

The Ts do yoghurt and cottage cheese containers and peanut butter jars--er, they clean them out; I usually have to retrieve them myself! *lol* Smart Sam!

Hi, I just got a reply from Karen Noe about shawl pattern. She said if i want to buy yarn she will do a pattern in english. Thought you might like to pass this on. Judy Boddy

So, Judy and Monika... how do we go about contacting Karen Noe about the pattern and the yarn? I did notice her kit is somewhat more expensive directly from her than the kit on the German site she initially gave us. Maybe this is because of fees we're not aware of in the US?

That koigu is a great choice! Sam is very healthy to be eating yogurt...and very smart to know when the kettle boils!

I purchased the kit from Wollsucht but it did not include the pattern, although it is clearly described on the site as a knitting KIT.