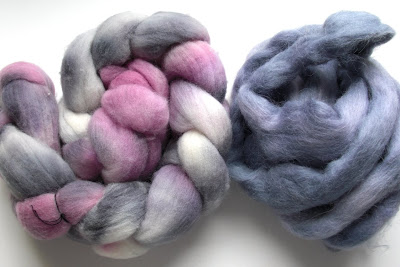 I missed last Friday's handspun post. But here I am today. This one's not so exciting as others, it's rather boring. Don't know what I expected, when I combined these two. I liked both colorways, but put together - b 0 r i n g!

I like spinning with Falkland fiber. It's like Corriedale I think, and I wanted to make 3-ply sock yarn. But with 4 oz there would not have been enough for my size. So I added some South African Fine, which I dyed a long time ago. I did felt it a little. It was a struggle to seperate strips, and predrafting was a must. Still I liked the color combination of lavender/silver birch. I still have a couple of ounces left. I might use this color combination again some day.

The Falkland had many nebs in it. You can't see that in the braid, but I got very frustraded while spinning. At first I picked them out, but they came so frequently, that at some point I let some slide. So the singles were a little uneven. To top it off, I forgot to check the tension on the Lazy Kate (again) and it overtwisted with plying. But adding the second colorway gave me some great yardage! ~ 622yds!
Yesterday we had thunderstorms and Tornado warnings. It was like the world came close to an end. The eeriest light after the storm. This photo is not photoshopped or whatever. It was just fantastic to watch. Here the bad weather moved on East.

And here the look to the West. I saw some blue before the sun was down for the night.

More exitement was to be had that day:

While thunderstorms were all around us, I was sitting on the sofa spinning on my new used Ashford Elizabeth wheel, which arrived yesterday. I've got it from Susan. It came in two boxes, and after David put it back together I grabbed some undyed natural brown BFL to give it a whirl. Boy, that's a big wheel combared to my Ashford Traditional! I tip the treadle once or twice and it runs, and runs, and runs, it might still be running, I haven't checked. Among the many accessories there was a Wooly Winder as well. I always wanted to give it a try and now I have. At first it ripped the fiber right out of my hands, but I managed it in the end and spun up 2oz of the fiber in record time, even my usual thin singles. This was a very nice experience during bad weather. And to top it all off, Happy (I still want to say Sam, after all those weeks!) snuggled up to me and let me spin!!! At first he was like this, head stuck in the corner, but he liked it better the other way.

Of course the peaceful moment did not last. I had to get up eventually for something or other, and as soon as I did not pay attention, he grabbed a mouthful of fiber and was off at high speed. I think he was planning it all along. Lull me into believing he's harmless to my fiber, when in reality he's fibers worst enemy. :o)
***
Have a nice weekend you all!
***
Posted by Monika at Friday, August 21, 2009

Awesome photos of the evening sky !
It must have been terrible during the storm , judging by all the news reports .

Congratulations on the new wheel , sounds like we'll be seeing even more gorgeous handspun here .

Sorry it didn't turn out quite what you were hoping, but the colour i the SAF is gorgeous -- yummy silvery blue. That is one weird sky. :-P

oh, I love that wheel. I spun on one before buying and loved it then, it was just a little too big for my first and only wheel. your fiber is beautiful and I love the blu-ish gray.

You did very well for not liking the fiber you spun! I would never have touched it with all the nasty neps in it - yech!

Meanwhile, your new wheel is stunning! Enjoy it!

congrats on the new wheel! i want a big saxony someday, but it'll be awhile.

What a weird sky! Any experiences I have had with tornadoes is that the sky turns green. I heard about all the storm warnings down east. Glad you're okay.

The Elizabeth looks right at home at your place. I'm so glad that you're enjoying her!

Don't even get me started on dogs that take off with fiber. Cough (Bentley) cough.

I think they look nice and peaceful together. The yarn, not so much Happy. He looks like he's waiting for you to drop your guard. Whoops! What a scamp.

Very pretty the lilac one! I like it!
I love to come here to see Happy pictures!

1-love reading about your spinning and hope one day to spin like you
2-crazy sky!
3-cheeky Happy

Queen of the Tea Cosies said...

No no. Not boring. Luxuriously soft and tranquil.

Lucky you getting a new wheel...now I can only imagine what you'll be spinning. now... ;)

Well you might think it's boring but I really love the colors! I don't know, I'm into more sedate blends lately. I know how deeply annoying those nebs can be - fast!! Oh well, it's behind you now! LOL! Time to just sit and enjoy that gorgeous new wheel!