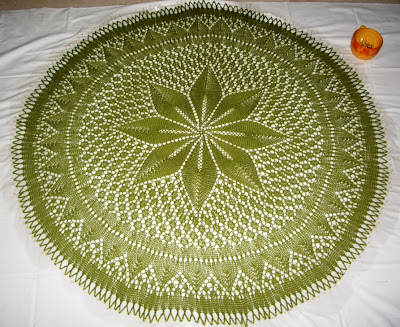 Phew, just finished blocking! Sticking over 200 needles in the carpet floor, crawling around on your knees is not my kind of fun!
This project had to be done. It's a between project, one that has been on my mind ever since I saw Jared's stunning Hemlock Ring Blanket. I saw it, and fell in love with the idea, his choice of yarn and color, and I had to make one for myself. Of course Jared found the perfect pattern for his, but I didn't want to copy it at this time, though I think I'll knit it some day anyway. I found three doily patterns, which I liked for a lap blanket, on this danish website. Once again the Internet came to the rescue, with loads of information, and I was able to translate enough to be able to knit the "Syvstjernen Doily". I'll get to the name later.

I'm glad I could provide my son with a chuckle and a laugh, when I told him, that I screwed up this doily BEFORE round one! That's right. I didn't notice until about round 65 or so. How's that possible? Easy. My thinking was that a doily knitted in the round must start with 8 stitches. So I cast on and worked round after round. Sometime during knitting, it bugged me as what the name of this doily's meaning was. So I translated and investigated. It means "The Pleiades" also know as the "seven sisters" or "Messier 45" (star cluster). I was scratching my head, because nothing in my doily suggested the number seven. I had eight "leaves" in the middle, so how come?

There was one sentence on the pattern sheet before round 1 started. At the time I just ignored it. Now I found out that it said to cast on "syv" seven stitches. It never crossed my mind that these three letters actually are a number. Anyway, since everything turned out to be alright I knit on.
Soon I encountered some sentences in red, which were hard, to not at all possible to translate. Sure I could translate it word for word, but that didn't make any sense. So what to do? I went to the Internet for help again. Greatest invention of all times! I found a danish website, Hyldemor, where Anni was writing her posts in English. She is such a dear and very patient, and she helped me with the sentences, which confused me. Thanks, Anni! Couldn't have done it without you!

One can probably knit from any language, as long as you crack the "knitting symbol code". As long as you know what "x" or "y" means, you are good to go. Because all we knit is purl, knit, and YO anyway. ;o) 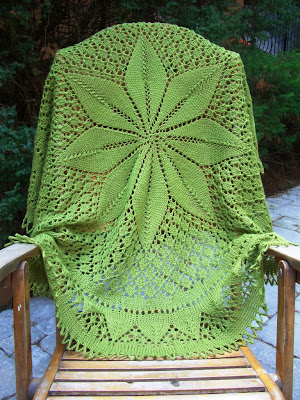 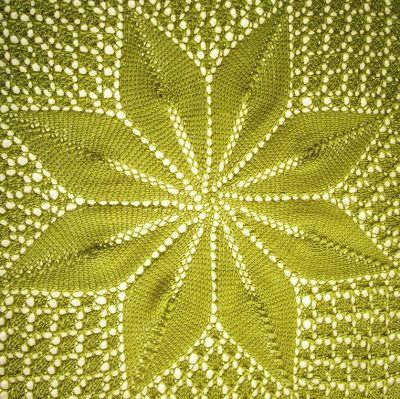 "Many a night I saw the Pleiads rising thro' the mellow shade, glitter like a swarm of fireflies tangled in a silver braid"
by Alfred, Lord Tennyson, 1837-8, Locksley Hall 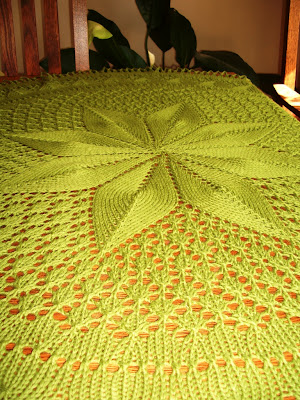 specifics:
pattern: Syvstjernen by Anders Andersen; English version of the pattern can be found here
yarn: Patons Classic Wool Merino, color # 240 "leaf green" 100g/223yds. I've used 3 balls, with a few yds of the forth for the crochet bind off. (669yds plus)
needles: 45mm circular; I could have used a bigger needle size for this project, but I needed a long circular in the end, and a 4.5mm was what I had on hand.
size after blocking: 46" in diameter
start-finish: August 28th - September 2nd 2007 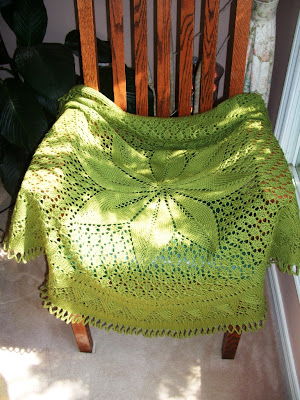 This lap blanket was knit so fast, that I didn't get to take pictures during the process. The yarn I wanted to use first, a 100% cotton yarn, turned out to be not the right choice, so I switched to Patons merino wool. I'm glad that I did, because it's warm and not scratchy, but I'll have to wash it by hand, which is very O.K. by me.
Also I feel a bit like a fool, because today I found the English translation for this doily pattern. So if you want to knit one yourself, just go to Yarn Over website and get going. This lap blanket can easily be used as a shawl or a table cloth as well. I LOVE the color, which was very hard to capture in the pictures, not one got it right, but close enough.
Posted by Monika at Monday, September 03, 2007

monika this is absolutely beauiful!! I love the colour you chose and the weight of the yarn! Another stunning project!

That is really gorgeous!!!

This is stunning Monika! Just beautiful!

First of all, Monika, your lap blanket is stunning. Thank you so much for sharing pics of it. And a great big thank you for directing us to YarnOver. OMG, those doilies are exciting. I can picture every one has a lap blanket ala Brooklytweed. Perhaps he's started something because there is already a KAL on Yahoo for the Hemlock one he did. Many, many thanks.

Oh Monika that is just so beautiful! Wonderful colour , well done ; thanks for sharing the link .

WOW!!! This is stunning! I could hardly tear myself away from the pictures!

Quite simply, gorgeous. You continue to amaze me with the speed at which you produce the most glorious projects!!

oh my word. it is simply beautiful. i love the color! stunning...

Wow, beautiful!!
I surfed around that site and found three more doilies I want to make as shawls. You are SO not helping me. ;-)

I just wanted to tell you that it's absolutely exquisite! Your knitting is so perfect, and the design sublime. You should be very proud of it, eight leaves or not. It's quite the accomplishment. When I get done with these socks, I can't wait to cast on some lace!

I am not quite sure how I found my way to your blog(one link leads to another at 2am), but I love the 'doily' and the fact that you knit it in Patons merino...I happen to have more than a few skeins of it in various colors. This is definitely something I want to try!

Oh my, this is soooo beautiful, I LOVE it!
Can't believe it only took you such little time to make it... I am stunned.
Great colour, ich liiiebe Gruen. Oh, das wuerde ich zu gerne lernen und mir auch so eine Decke stricken. Sehr inspirierend!

Oh, it's so beautiful! The color is fantastic, too. I love Patons Classic Merino, but I don't think I've ever seen it worked up into something so pretty!

Your 8 pointed "seven sisters" is gorgeous! I am so impressed that you got it all figured out/interpreted/and knit - WOW - it IS beautiful!

It's beautiful! The colour is perfect!

Oh my, that is GORGEOUS Monika!! I love the color and the pattern. I've been drooling over Jared's throw myself actually and even printed off a doily pattern. I love your knitting pictures! You never fail to impress me :D!

Beautiful! I think you are the queen of blankets! I love the delicate look to this one.

Very beautiful eightstar !! I ´ve been reading you blog for a while, and I just wondered how you translated from danish to english ? well, there it was. hyldemor. By the way I´m dane too, should you ever need help with a pattern in danish again....smile

Another stunning shawl, Monika, and I love the story that goes with it :)

Oh, gorgeous, Monika! So much softer than your barn jacket too, no? But that jacket is cute too, even if it did drive you crazy.

It's beautiful Monica!! I love it! Delores

Simply beautiful! It would make a fabulous tablecloth in red for Christmas I think.

How beautiful, and very amusing that yours is so unique: an 8 instead of a 7. I love the colour too!!!

Very beautiful. Makes me itch to knit lace! :) I love the color too. Green is my weekness.

The blanket is beautiful! I love the color, and I can't believe you finished in less than a week!

gerogeous! how are you knees feeling?

I don't check your blog for a couple days and you've knit a BLANKET?! LOL. It's beautiful!
I used the "CHarlotte Doily" (from the Yarnover.net site) for a blanket. Well, I thought it would be big enough using worsted weight, but it ended up not very big so I had to improvise a lot more to make up a baby blanket. Perhaps though I should have used a wool that could have been stretched out. Oh, yeah, I did that last fall for another baby blanket, LOL, but I used laceweight and knew it wouldn't be big enough.
I have quite a bit of Classic Merino. Not sure why I bought it cause the thought of handwashing a sweater....this might be a great use instead!

stunning. congratulations on such a beautiful accomplishment!

Oh, that is just beautiful. I love, love the color you used. I need to knit more with green! Your son obviously has a good sense of humor.

Very very lovely! I love paton's wool. Good to know you can knit lace with it :)

That is absolutely stunning! Wow, I have enough trouble with patterns in english, I'm very impressed that you translated the pattern from danish.

Absolutely breathtaking! That green is totally my colour.

that is beautiful! I love Jared's blanket but haven't the nerve to tackle one of my own. I'm very impressed! and it's green! ;)

That is beautiful. It's just gorgeous.

I love your blanket. I had the same thought about copying the Hemlock Ring patternn. I chose the Azalea Design from Mariane Knizel's First Book of Modern Lace Knitting. It is a great book, worth getting. I am 23 rows in and it looks great.

Fabulous! I went to the site and grabbed some other ones to try. Thanks!

Monika, you think can be used as Baby Blanket?
I started doing in blue, and is getting beautiful.
Kiss