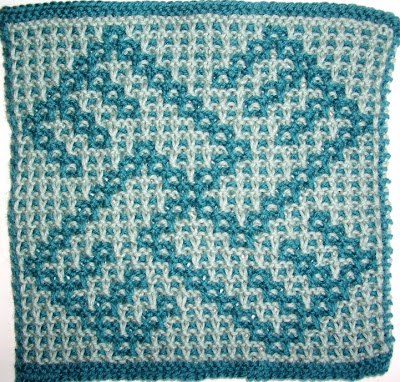 I'm tired and it's late. I just finished plying some singles I've spun tonight. But first have a look:
I've been playing with my wheel. At first I just sat there and had fun with treadling, without yarn involvement whatsoever. That was fun!
Then, I took two finished sock yarns, left overs from the pillow I made and black sock yarn from Hannah's last socks. I plied them together. What fun THAT was! And it even looked kind of nice. 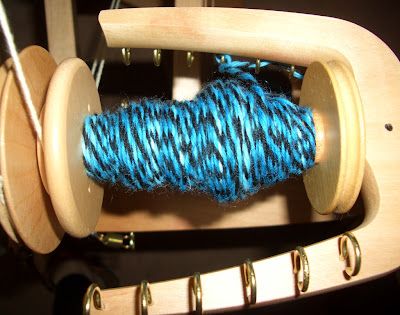 The below sample took me the whole week to finish spinning. It's my early morning spinning, and it got pretty thin! I'm very pleased with that. Last night I finished the green one, and this morning my thumb and pointy finger still hurt. I think I pinch too hard. My fingers were blueish-green from the roving, but with a little soap it washed off easily. Oh, and I figured out, that I can spin thin with this "Little Si" spindle as well. That does not mean that it's even spun though. There are still thick and thin spots, but I'm getting a lot better. 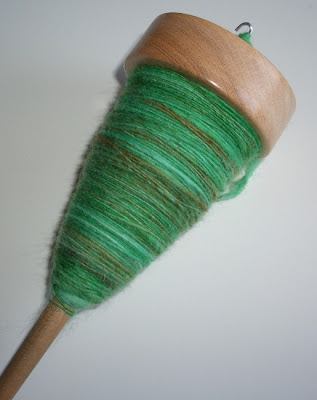 Now, here we come to the reason for my frustration. My very first "yarn" spun on the wheel. My first reaction was to throw it away, and forget about it. But I'm brave and so I plied it together. It was a disaster from start to finish. If there was a cliff nearby, I would have jumped off it, spinning wheel and all. I can't describe my frustration with this new hobby of mine. Why didn't anybody warn me? Tell me how hard it is? After producing this shameful kinky tangled mess, I needed either chocolate or some nice spindle spinning. Guess what I choose?! Anyway, I made so many mistakes it's not funny any more. I took my books with me to bed and tried to find out what I was doing wrong. At first I discovered, that I used top and not roving. And you are not supposed to rip top in stripes like with the roving. First mistake. The Coopworth is so soft (not like Merino) and fluffy and I had a hell of a time with it. I'm not even talking about the overtwist, you can easily see that for yourselves. See how this skein twists, I did nothing, just threw it on the table. Still have no clue how to get rid of "overtwist". All the books and brochures can't help me there. I did all they said one can do, but had no success.
Second, the spun yarn wouldn't feed through the orifice and wind itself on the bobbin, I practically had to push it through. Pegging didn't help either. Cursing, crying, and yelling were equally unsuccessful actions. Although I got a grunt out of Sam, who tried to snooze beside me. I really didn't feel the love that night. 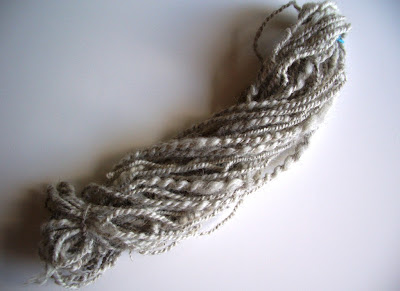 During the day, I made a wide circle around the wheel. Couldn't even look at it. Didn't even want to. I started another sample with my Forrester spindle. How nice, how comforting. But in the end I had to give spinning with the wheel another try. So I spun up two samples again. Well I say spinning, but it was the same disaster as last night. The only thing better was, that this time I used roving and it was not as fluffy, let itself handle better. I felt sorry for this gorgeous colores. My heart was bleeding, sweet little orange roving. Can you say overtwist really fast and several times in a row? I think my wheel made that kind of noise, overtwist - overtwist - overtwist - until the yarn broke, again and again. Boy spinning with a wheel is hard. Did I mention that? Well to make a long terrible story short. I got to ply the singles. Let me tell you, it was not pretty. My husband came by and wanted to help me hold the singles, or DO something. I was in the middle of a mess, everything was tangled up, before, behind and around me, my arms as far as they go outstretched into the air. But since I still had my feet to work with, I declined his offer to help. Thank you very much! Imagine my relieve, as the yarn broke once again (single was very thin in spots), and the bobbin was kind of full, even if there were some yards of the singles left, I called it a day. Here you can see my triumph over yarn. I'll let it rest over night before I wind it on my niddy noddy. I need some time to myself now, contemplating about life with or without spinning. I have to lick my bruised ego. 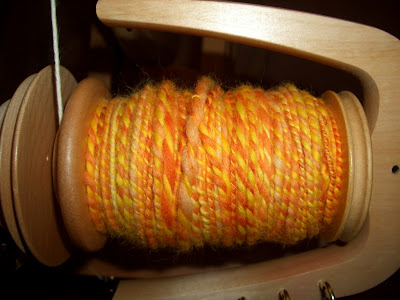 It does look pretty and innocent on the bobbin. I'm sure once I'll release it, it will jump off the bobbin on its own, because of the overtwist. Sigh. I feel like an old balloon right now, which got away, caught in a tree, hanging there for ages, all the air gone out. That's me.
It's not all frustration here. I've always fun with these two guys. That's as far as Sam goes when water is involved. I'll hose him down, when it's really, really hot. Biko in the background is wet of course. Had a little splish-splash, and is quite worn out. She threw her tennis ball into the pool and didn't get it. That's her way of saying, enough is enough, you can get it yourself. 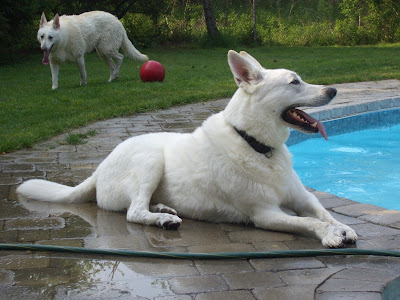 I'm sorry you're having some frustrations with your spinning wheel...but with your talents, I'm sure you'll be an expert in no time! :) Biko and Sam look so happy next to that pool.

Sorry about your disappointing spinning. It will get easier, and soon you will be telling us happy spinning wheel stories :-)

oh i am in love with the squares. the are amazing.

I feel your frustration - but I also have a feeling you'll look back to this post in the future ...when spinning is so easy that it is your meditation (easy for me to say)and you will smile.

Maybe a couple of days lounging by that beautiful pool of yours will iron out all your spinning woes!!!

You'll get the hang of it in no time! Looks like you are improving all ready.

Lve the dogs by the pool. Looks like they had a good weekend too!

Sam and Biko are just beautiful and very funny!!! My Labs swim in Winter, well, it's 1 day to Winter and they swam in the icy cold creek today. I love your socks and the shawl and especially your dyeing!!!

What fun you must be having doing all that spinning (even if it is a little frustrating at first)...I'm jealous!!