edited: Hi Judy from Alaska. Yes, this blanket. or rather the squares to knit it, can be found in the Barbara Walker "Mosaic Knitting" book. There are over hundred designs to choose from. It's not hard at all. You only knit garter stitch, RS and WS, you just have to slip some stitches. It's explained very well in the book.


... and you thought I didn't get any knitting done!


I made a decision a while ago, one only I could make. I decided to make Hannah's Magic Mosaic Blanket NOT with 63 squares, but with 40 squares. I just couldn't stand the thought of the never ending squares lining up to be knitted. It may seem that they are very different, but the basic knitting structure is the same. You count black or white squares and knit accordingly. While knitting this, it is just boring, even if the outcome does look different every time. Anyway, after I've agreed with myself, that 40 is a much more realistic and human number, the knitting got easier. So, here you see 20 squares finished. 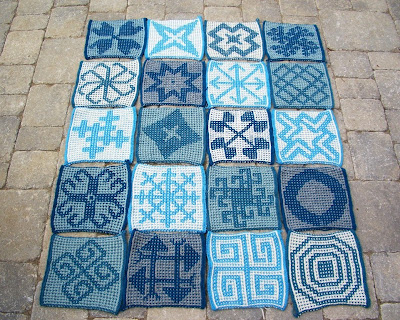 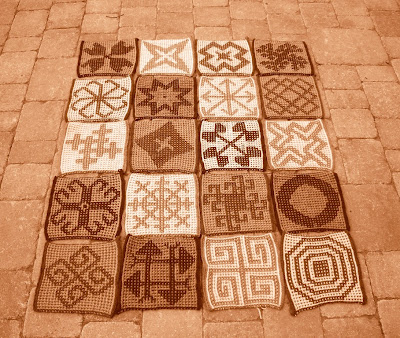 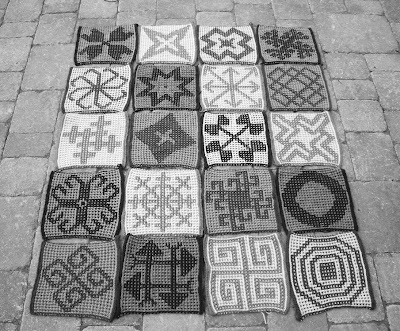 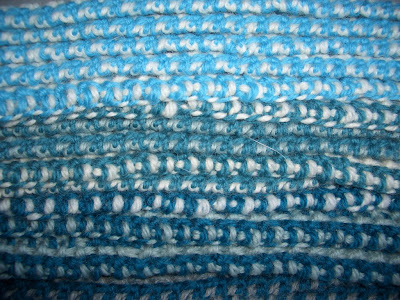 They are stacking up, and of course there's a dog hair mingled in. I should have woven in the ends right away, but since I didn't I'm not going to start now. It's four ends to weave in each square, by the way (not too bad). 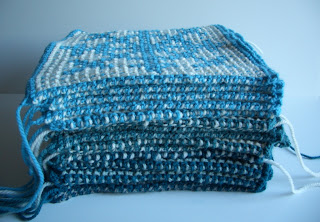 Half a blanket with quarter of a dog for scale. ;o) Biko and Sam had no respect for this work in progress. They ran over it, and threw the ball on it, it was a wet and slimy ball. 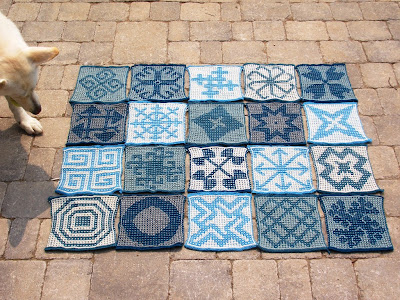 The following two squares are the latest ones, not in the above pictures. I try to knit two squares a week. To keep true to my promise to myself, I'm also working some of the squares for the The Walker Treasury Project, where I post them as they become done.

If you would like to see these squares in a different color scheme have a look at Heike's blog. She's knitting this blanket too. I think we even have the same amount of squares finished, but she's way faster than I am, and knits one sweater after another as well. 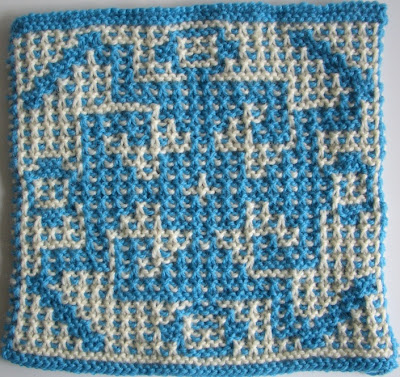 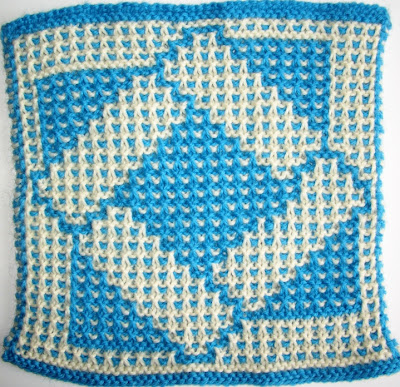 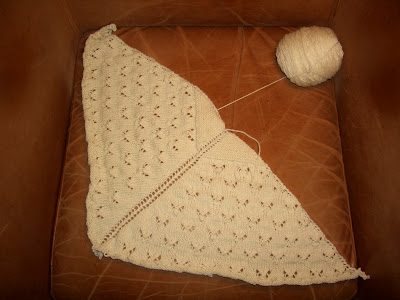 This WIP shawl is no more. David saw me rip it out last night, and he said that I'm probably "nuts". This was going to be my triangular shawl, which I wanted to paint, but you all know; deep in you heart you know when somethings not going to work. I wanted to give it another chance and knit on, but in the end I knew it's not going to happen. I didn't swatch, since size didn't matter, but I choose the wrong needle size anyway, but what was the push over the edge was the stitch pattern. It was supposed to show some nubs on the RS, but the most beautiful nubs appeared on the WS, and I did NOTHING wrong (or so I tell myself). No stretching and blocking would have brought them to the other side. So, go it must. I've already cast on for its replacement. The jury is still out whether this one will make it. So many hours of knitting for naught. But that's what I like about knitting. You can start over, since you still have your material.
Supplemental:
I've been tagged. Thank god that doesn't happen too often. You might have noticed that I don't do memes. I think most of them are too personal. This blog is already about ME, since I show my work and some of my thoughts. If I would want to share more, I would and will do it during a post. I don't even read memes on other blogs, that's not why I go there. I hope you'll understand.
Posted by Monika at Thursday, May 17, 2007

Your blanket is incredible! What skill! I've never seen knitting like that before. Can't wait to see the finished product. I have frogged shawls before, too. If it's not feeling right, I just let it go. I love seeing pictures of Sam and Biko. Happy knitting!

That blanket will look fabulous when it is done. Me and weaving in ends do not like each other. I try to do it right away or else the project sits (forever) with dangling ends and me thinking, "damn those strings". No meme. I am the same (although I did post one about what I have and have not knit because that really was for my benefit and not others). Dog hair--its everywhere!

Oh wow, I'm in love with that blanket! That's exactly the kind of blanket I've been wanting to make. Patchwork pictures and such. Although, I have commitment issues LOL.

Yeah, my husband does the same thing when I frog work. "WHAT ARE YOU DOING?!! Can't you just go back a few rows!?" Apparently he just doesn't understand the mind of a perfectionist knitter. :D

Love your blanket squares. I think i have found my next project. Is it from Mosaic kntting with B Walker? Every day i check out your blog . How hard is the blanket, as i am kinda a new knitter, Thanks so much, Judy from Alaska ~~~

My gosh- that blanket is wonderful! It look slike ysomeone may try to steal it for their own though!

Hmmm not sure I can pick a favorite, there are soooo many that are so very, very cool!!!

Yep 40 squares is certainly going to be big enough. Now the real problem is choosing which 40! ;-)

Nice pix btw...rubbing in my disasters from yesterday? LOLOLOLOLOL

I think 40 squares will be perfect...It will be a BEAUTIFUL lap blanket!!!

I love your Mosaic squares and I think "my favorite" is "your favorite"...although it is hard to really pick a favorite as they all are beautiful :)

I don't think that blanket is boring at all! And I think I have that BW treasury...if I could just talk my 11 year old into accept a cool knit blanket like that instead of the crochet acrylic one from another lifetime that he wants me to finish!

Thanks so much, I just ordered the book, Judy from Alaska ~~~

ohhh they all look so beautiful!
Its going to be a fantastic blanket, one that will be treasured for years to come!

the 20 square are goregous i can't wait to see all 40 done!! it will be breath taking for sure.

This blanket is so very beautiful - a real piece of art! I can't wait to see it when it's all finished, in all its glory!

I looooove that blanket! It's an absolute treasure!

Love your mosaic squares.
It's just so great seeing those patterns come to life.
:)

this is very beautiful. i have to embark on that ship too sometime doing mosaics. and this is the kind of knitting you can do in a most meditative way.

What an awesome-looking blanket! The swatches by themselves are impressive enough, but in concert the results are gorgeous--well done!