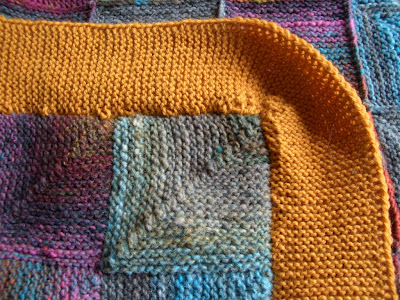 First rounded corner
I've used the knitted on sideways border once before, but it was with my Pinwheel baby blanket, which was knitted in the round. There I had a narrower border with only 10 stitches wide, and over 500 life stitches to work with.
Anonymous asked how this works, so I'll try to explain, for those who don't know yet:
With this blanket, there are no life stitches. That's why I have to pick up stitches as I go along, with a separate strand of yarn and a double point needle, I pick up between 20 and 25 stitches. With a different strand of another ball of yarn (same color though), at first I cast on (in this case) 16 stitches. This is a garter stitch border, so I knit the sts and when I come to the last stitch I [K2 tog] the last stitch on my right needle with the first stitch on my left needle, which is the needle I picked up the stitches with. Turn. Knit 16 stitches, turn, knit 15 sts, K2tog and so on.
Of course, eventually you'll come to a corner, which needs to be rounded, in the truest sense of the phrase. You do that by including short rows. As you can see, I made some progress with my corners. My first corner had not enough short rows and is turning up it's nose at me. There's one rule, the wider the border, the more short rows it needs, but with corner # two and three I used the same amount of short rows, they still don't look the same. Why's that? It also depends on where you place the short rows.
So you see, I'm still trying to figure out the best way, still have one corner left to improve, but to be honest, the third corner already looks good to me. ;o)
Second rounded corner 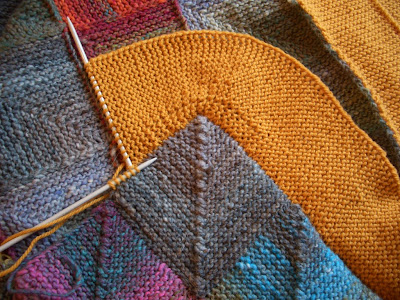 Last night, my arm hurt to much to keep on knitting, so I decided I would go through my knitting books and make two piles. The smaller pile is the one, where I've knit at least one project from, the way bigger pile are the books, I've knit nothing out off yet, but that's about to change. I've noticed that there are 4 sock knitting books, which I like, but still didn't use so far. I had way too much fun designing my own patterns. Anyway, that's what I'd like to do in the future, knit from my knitting books. That should be interesting ...
Have a nice weekend! 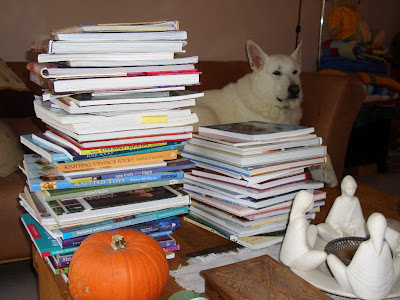 Thanks for explaining that border!!! Very cool. I saved the instructions and I think I'll try it.

I'm guessing all those corners will lay flat with blocking!
I was going through books and magazines this week too - in one of my high knitting energy moments, I decided I would make a pact with myself to knit at least one pattern from every book/mag that I have and that I buy in the future!

That blanket is gorgeous! I have been envisioning something with mixed Kureyon, and that may just be it! One of these days...

That blanket is going to look gorgeous with that border!

that thirds corner looks perfect! (not that the first two look bad) i love the blanket.

i need to do the same with my books. that's a great idea.

I love your blanket so much I just had to start knitting one of my own. I'm working it a little differently but I'm so so so happy to be using up my Kureyon stash after Lizard Ridge proved to be too heavy on the short rown for me! Thanks for the awesome inspiration.

Your border look great, thanks for the explanations. I am guessing my knitting book piles would look like yours, except maybe less in the knit from pile, makes me afraid to find out for sure :-0

I can't believe your pumpkin has lasted so long, amazing!

Wow, that is going to be one amazing blanket! My word, you have quite the knitting library. You should have tons of inspiration in those piles :)

I love the blanket. The colors are fantastic. You have done a beautiful job.

How did you choose ONE colour for the border? Wow.
I don't pick up those stitches with another strand first, I just knit into the edge st/row as I come to it. But your way looks like it would take some of the guess work out.
As for the corners...what I do, is imagine a marching band. The inner most man (stitch) just pivots....the outer most man has to take a lot of steps to make a right angle turn and keep the outer line straight. You can get mathmatical, and figure out just how many extra steps (rows) he needs to take from the start of the corner, to the turn, to the other edge. Or fudge it and ease it when blocking :)