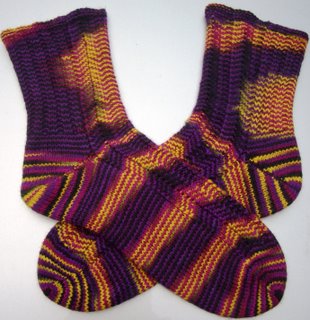 yarn: Knit Picks Sock garden, colorway "Pansy", 100% merino wool
needles: 2.25mm foot, 2.5mm leg
Pattern: toe-up, jojo heel, chevron pattern on top of the foot and in front of the leg, the back of the leg is done in K2 P2 ribbing.
At first the yarn behaved quite nicely, but after the short row heel it went crazy. At first I was mad (I've ripped it back once already because the foot turned out too short) and I didn't want to rip and knit it a third time, so I just went with it. Now, that I see them in the pictures, I like them. Doesn't matter anyway, because they are not for myself, but a surprise for somebody else. 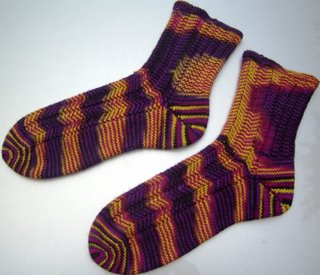 I know, that's a lot of posting for one day. But I'll be drowning in a sea of garter stitch during the next few days (hopefully) or even weeks. I'm quite determined to get the Log Cabin Blanket done, once and for all. David's getting a new bed and he's looking forward to both, the bed and the blanket. Well, there's nothing left to say, I guess. Can't hide any longer, I think I see the blanky lurking in the hallway, waiting .... ;o) - (nothing else on the needles right now - unbelievable!)

Oh, and Sam did use his leg this evening, very cautiously, but it's a good sign. He's miffed that he's confined to the living room, but poor Biko has to stay with him for company. Last night he showed us, that he's the boss of us. After we all went to bed (around midnight) he started to howl and whine, quite embarrassing really. I'm sure the neighbors could hear him too. David and I had to get him and help him up the stairs, where he then proceeded into his doggie bed and started snoring in no time. ;o)

Monika - I love these Pansy socks! I guess I'm a little strange, as I am quite fond of color pooling.

I like them too! They look really different and pretty!

I love them! The pooling is cool!

Another pair of beautiful socks...it amazes me that you can knit so fast (and perfect)!

I think the pooling makes it look pretty! Isn't that the fun of handmade socks? They are personal, and special.

I LOVE the way these turned out! This is good because I have 2 balls of Pansy in the yarn closet just waiting to be used.