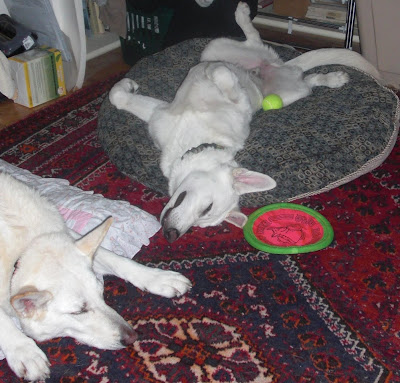 What has a round belly and sticks all four legs in the air? (no not a dead sheep) - It's himself, the little piggy called Happy! He got into his feed sack (which will be transferred into a container soon) and munched away until he couldn't eat another bite. And then? I came along and announced dinner time, and slightly wondering about his lack of enthusiasm over the announcement (usually there are jumps in the air about a meter high), I put another cup of food in his bowl. He looked at it, looked what Biko did with hers (all the time and he would have been finished by now), and started eating, v e r y s l o w l y. He was done way after Biko, she's had already left the kitchen. O.K. by then it dawned on me what he had done. Little piggy! Is it a myth that dogs who ate too much get diarrhea? I think not.

LOVE the photo! too cute!
my guys would have ate till they got sick then ate some more. I have all their food in a large tote in the pantry ;)

hope you had a very Merry Christmas and have an Excellent New Year!

LOL! I know if mine were able to get loose on their bag of dog food they'd eat til they couldn't move!

Well, Merry Christmas to Happy! LOL I think there were some humans that looked like him after dinner last night too.

I think Happy is secretly a Labrador. Tori did that, ate so much food that she was as round as a beach ball and very sad and sorry for herself. We have leapy hungry dogs here at breakfast time and if they weren't hungry I would suspect something to!! What a good girl Biko is, and what a wicked boy Happy is!! He's so big now too!! He just decided to give himself an extra Christmas gift!!

Happy is just too cute! We have a plastic bin that seals up with an air tight screw on lid and it works well for us. Fits a 30 lbs bag of food so it lasts a good amount of time with just our one eater.

He looks quite pleased with himself

It would appear that Happy gave himself some extra calories for Christmas!

I hope your holiday was as satisfying as his was.

Happy! I'll bet his tummy was happy. At least he tried to eat his dinner..... so cute.

Warm is what's most important in a hat! The chevron mittens are going to be cute.

And that picture is just waaaay too cute! :)

Ha! I love the photograph of the dog who's eaten too much. I bet a lot of people felt that way over Christmas. I know I did!

That silly boy! I hope he didn't have pain in his tummy?!