O.K. I fixed the link to Sunshine Yarns.
One last word about ravelry login, and than I'll shut up. Of course I do know about the "remember me", and I've checked it, but it only remembers my user name, I still have to type in the password. It's the same with blogger, and hotmail, remember the username, type in the password. Anyhow, it's no big deal. :o) 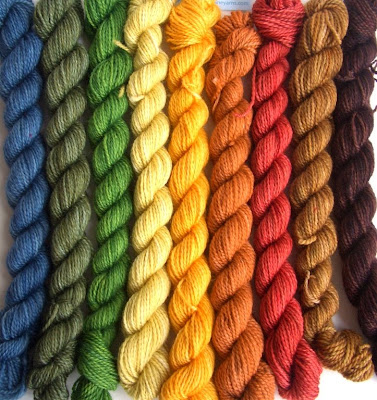 Ever since I announced that I wanted to spin for a specific project (mittens), I've NOT touched my spinning wheel. Every day I feel guilty, when I pass by it, but find excuses why I don't get on with it. I've decided to forget about spinning for a specific project. I want it to be fun, and I'd rather spin with joy, and find something to do with the yarn later, than not spin at all. 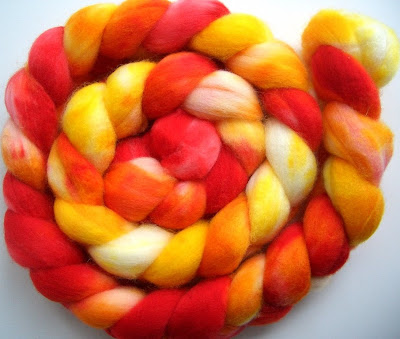 colorway "Phoenix"
That's why I shopped for new fiber to get me motivated again. The above picture of mini skeins, as well as both braided roving where purchased at Sunshine Yarns . 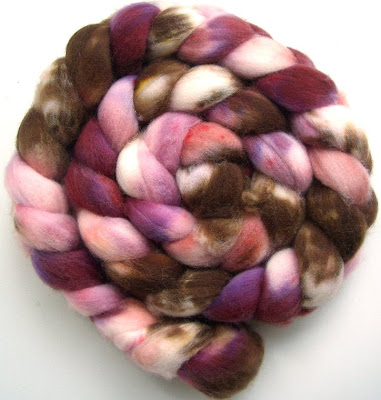 I do have to admit, that "Phoenix" is almost too much, even for me. We'll see how this will turn out. I do LOVE the "Chocolate and Cherries" colorway.

I think I will use the mini skeins to knit the mittens I wanted to spin for.

Sam is enjoying himself in the back yard. He's doing not too bad under the circumstances. But the drug prednisone makes him do things, he normally doesn't do. This morning, after we were up and about, and we all had our breakfast, we found him in the hall upstairs, licking his chops. That meant one thing: he ate something! He's under no circumstances supposed to gain weight, it would put too much pressure on his front legs. Anyway, I knew at once, that he was in the bedroom, and helped himself to treats. I have an open box beside my bed, to give them treats, before bedtime. He never stole from it before, but I found it half empty, even though I refilled it just last night. Must be horrible to feel hungry and thirsty all the time.

Poor Sam -- the temptation must have been too much. I'm curious to see how that fiber turns out!

Ooooh, I love those mini skeins - such gorgeous colors! And of course, the roving is fab. I think the colors will mute a little when spinning, so no worries!

You'll have to watch him -- prednisone is a steroid, and steroids cause strong appetite. My cat, Nala, was on steroids once, and the vet warned me about the appetite and not letting her overeat. The poor baby -- the drugs made him steal! lol! :)

Those mini skeins must be from KP? What are you going to do with them? I love the roving. Looking at it makes me want to start spinning too :) I can see the orange one make a toasty pair of mittens. Just looking at them would warm up my hands. I hope Sam is feeling ok and doesn't get himself into too much more trouble.

It's funny how humans and animals have the same side effects of prednisone. My friend, one of her boxers and I have all taken it and had the same response. That is kind of funny to catch him being naughty though. :-) I like the roving you picked!

I love the roving! Both colours seem very nice to me.

I am glad to see some pictures of Sam playing.

Strange about Ravelry. When I check the 'Remember me' box I don't have to fill in my password again.

Pretty colors!
The link must not be complete for
Sunshine Yarns, it only takes one to
Blogger.

I know just how you feel about Sam and what the meds are doing. It is so much worse because you can't explain it to him. On the bright side he looks happy as a clam in the garden :)

I freaking love those mini skeins. BTW, the link seems to be acting up to the yarn vendor.

I love the chocolate and cherries, but I think Pheonix has some real potential!

Love your new fiber! Looks like rainbow mittens are soon to come...

Have fun and hope your spinning mojo returns soon :)

I may be able to help you with your password remembering; In your browser, go to Tools - Options - Security, then tick for "remember my passwords". At least that's how it works in Firefox, and I expect that IE has something similar.

Oh , poor Sam . Isn't it funny how we can usually tell when they've been up to something . I can just imagine him saying , but they were just there I HAD to eat them , the devil made me do it ;-))

Love the roving , the chocolate and cherries looks especially yummy ...

Chuck chalks up Gracee's constant licking to Prednisone, which she has been on, every other day, since she came to us at six months. My friend says it makes their tongue itchy and they lick to scratch it. Also makes them ravenous.

Oh yes, and those skeins would make a great Babette. Lovely colours.

Love the Phoenix colourway (and the other one, too.)

Poor Sam. My little dog, Bunny, has to take medicine to prevent seizures. It makes her want to eat all the time, and it even makes her eat inappropriate things. (Think wallets, dvds, extension cords...) So I feel your pain. I am wishing the best for him.

Your Sam doesn't know what hit him: medication that makes him hungry and, if animals react like humans do, gain weight. Steroids are no fun for either of you.