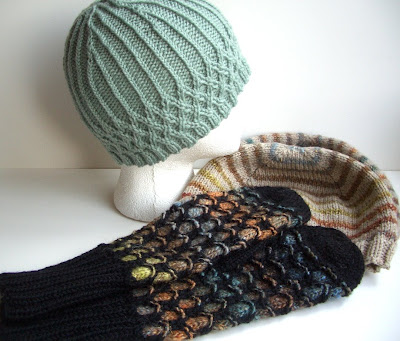 The last two weeks did not bring forth the knitting which I had planned. I've never frogged so much before. That's why I'm happy that I have some finished projects to show you, which were finished in early August. First, there are Newfoundland mittens, my 6th pair! 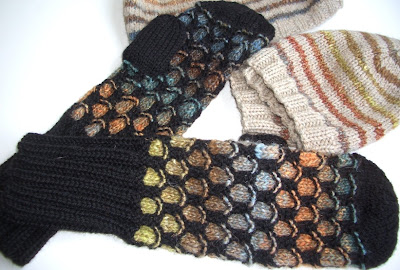 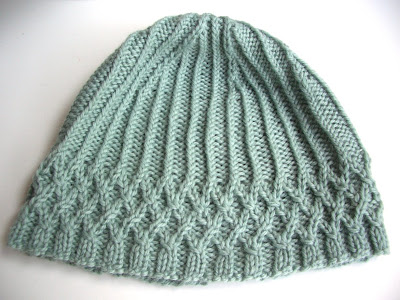 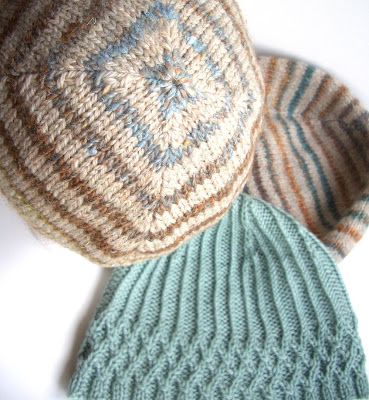 This hat turned out too big. That's why I made a second one, knit only with 4mm needles, but there's not much of a difference. Nevertheless, this Turn a Square hat was fun to knit, and I learned how to knit stripes without the jog at the beginning of the round. I'm all for learning new things, once in a while. 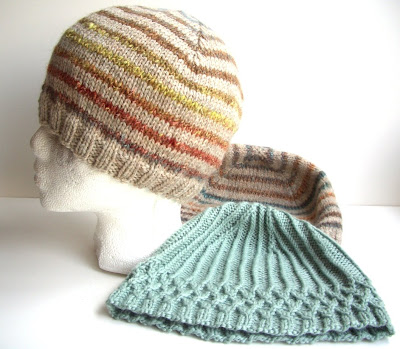 And here is one of my frogged finished projects. It's the 1840 Nightcap by Franklin 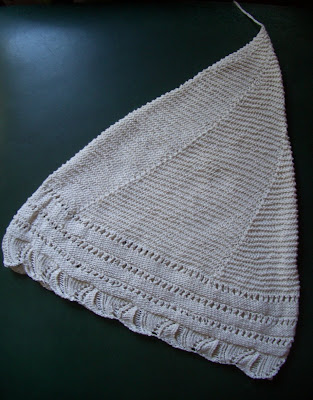 It was totally my fault, that the first attempt didn't pan out. I used 2.5mm needles. Although I didn't have the same yarn brand as the pattern called for, I've got a pretty close match. It was a PIA to knit this, so many purl rows, but I wanted to knit one just the same. I think it would make a fun gift, for any bald head.
That's why I bought some 2mm circs and cast on again. The pattern called for 2.25mm needles. And I got a smaller cap (only knit it half this time, put it on a thread, and let my son try it on), but still it was way too big.
The pattern says, it's supposed to be 22" at the lace edge. I've got 25" with the first attempt, and 24" with the second one (frogged of course). Before I frogged the second one, I've measured the cap above the lace edge, where the purl rows are, and it showed 28"!!!! Not good.
Now, I wanted to knit this as a gift, but can't bring myself to cast it on a third time. Maybe later, but not right now. I'm definitely are going to make changes to this pattern, like casting on less stitches, if I ever will knit this again. It's too bad, really.
*Oh, and there's another thing. I'm a little bit short tempered right now, and I think it's very annoying, that people in blog land use ravelry links more and more. Even though I'm on ravelry, I still have to log in every time I follow a link, which takes time. I'd rather have the links follow to the original source, don't you?*
Posted by Monika at Friday, September 26, 2008

I'm glad to see I'm not the only one spending time in frog land lately. Must be something in the air :).

I really love your creative whimsy mittens very nice colors. The hats are cute to.

As for the ravelry thing I usually have it remember me so I don't have to sign in everytime I click on links. I really think it's good to link to the original pattern though because, even though ravelry is a big knitting community, not everybody uses it.

You seem to be in possession of your beautiful knitted goods. I'm jealous of that.
Every time I knit something, there's someone there waiting for me to hand it over.
I thought about going into business for myself (maybe online) if I could stockpile a few things, but it's not possible. I'd have to knit in a closet!
How do you do it?

I feel the same about the Ravelry links. I'm on it, but not often, and I'd rather have the original link. This is going to sound heretical, but really, Ravelry is not all it's cracked up to be...

when i wasn't on ravelry it bothered me, but now it's not as annoying to me. i could see how it would be though. there is a blogger (name i can't remember) who does both links (ravelry and non). but i also have ravelry remember who i am (well, my computer remembers the site) so i don't have to log in each time...

I used to spend a lot of time on forums at ravelry but now I just mostly look for patterns and keep track of my projects. I really like your hats.

When I post a Rav link I always note it as one. Usually, though, I'll do my best to find the original.

Your mittens and hats are beautiful as always!
I've got Jared's Square hat pattern on my queue - just have to get around to starting it :)

Love the mittens!!!
And I totally agree with you on the Ravelry issue so you don't have to blame it on the short temper ;)

A Claudia hat! My, I may need to make one for myself :)

Love the Noro with the window pane patterns - shows off the yarn so well.

I had to buy Knitspeak to learn how to deal with the color join/jogging issue for my Lily hat. I'll have to see what technique Jarad uses. The color joins looks really smooth.

I don't much care if the link is to Ravelry or elsewhere. I'm generally logged in anyway but I can see it from the other point of view too.

Love the mittens! I have a few pairs planned to make this fall.

You look like you're all set for winter. It sounds like there are a lot of size issues with the nightcap. I'm sure you noticed that on Franklins blog. It's too bad because it's very nice looking. And I have Ravelry keep me logged in so I can click the links. But I also know that not everyone is on it so I try to give both orig and Rav links if possible. Though with my lack of projects lately it's not been an issue for me! :-)

I always stayed signed in to The Ravelry, but it would be very annoying if your weren't in The Ravelry.
Nice hats, and I know how hard it is to do the 'jogless' stripes!! The Wee Willy Winkie hat is so very cute!!!

Despite the frogging, you still have so many FOs. Love the hats!

How frustrating it must be you knitted that much and then the size is wrong!

The hats look lovely though.

If you log in to Ravelry and choose 'remember me' you don't have to log in again if you click on a link. But I agree with you that it is not nice to people who are not a member of Raverly. I have to admit that I sometimes link to a project on Ravelry but I try to avoid it most of the time.

Ah, so beautiful! You've made me want to cast on for all 3!

I love those cabled hats. Wow.

I love the Claudia hat. I'm off to look at the pattern. Your work is beautiful.

Despite the sizing issues, your mittens and hats are so beautiful! I wish I had a 10th of your talent and speed.

I agree with the de facto Ravelry linking. I make every effort to link to source postings for patterns and projects, with links to Ravelry for those who are so inclined or if I can find no other option.

I also spend much time with frogging ;) - that's the life of a knitter. Wonderful knitted goods - you are so busy with knitting! I wish I could knit as fast as you do :) Arlene

All your projects are lovely. That's too bad about the nightcap. Looks like a tremendous amount of work to frog. Better luck next time!!

I need to make those mittens this winter - if you've made 6 pair...they must be good!
Maybe the 3rd time will be a charm on the nightcap :-)

love all of your projects! beautiful. those mittens are great!

I love the Newfie mitts too! I think I must have made 12 pairs last winter!

I've had those mittens on my list to make for ages - the Silk Garden was a great choice. And I love the ribbed hat - you find the best patterns!

Love 'em all ! You have been a busy knitter . Beautiful as usual . I have all of these , except for Franklin's nightcap in my ravelry queue, queue being the operative word. No where near to being cast on . Must knit faster , must knit faster ...

Wonderful caps and I love those gorgeous mittens. The colors against the dark background really make them pop.

Gasp! Those mittens are incredible! And so is your hat! Glad I found your blog!