It's time to show you some knitting. As promised here's my gorgeous Noro striped scarf. That's right, this one's for me. O.K. it was hard to choose just a few pictures, but I love this scarf, and its colors so much, so if you roll your eyes, because it's just a freaking simple scarf, move along please. 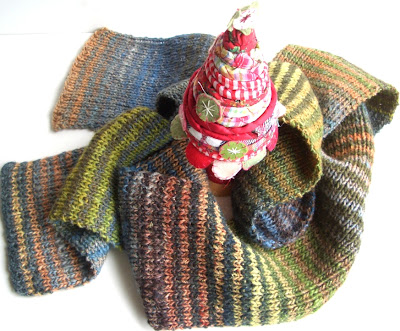 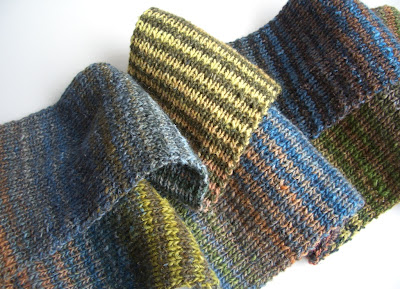 If you want distinct stripes with big contrast, be sure to choose two very different colorways. Mine had some of the same colors in it (guess when I like something, I really like it) and sometimes the stripes got muddled because of that, but I like it that way. I think the contrast stripes pop more this way. 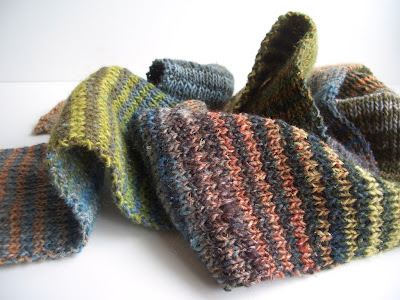 If it were not for the gorgeous colorways Noro Silk Garden has, I would not buy this yarn. I had to pick straw forever. I think this yarn is a tiny bit overrated. Lately I had a lot of knots in my commercial yarn, but here was only one knot in one ball, that's not too bad. It's still almost too scratchy for my delicate neck, but I'll suck it up. 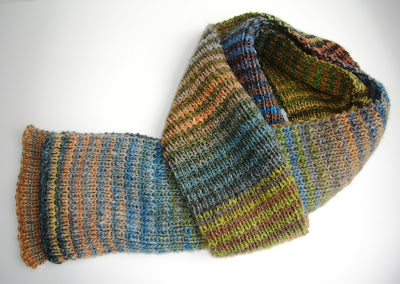 One colorway had much more yardage in both balls, than the other. At the end I knit from both ends of the ball, after the other colorway ran out, just to use it all up, and keep the stripes going. So there's nothing left over, just what you cut off from weaving in the ends.

Here are some specifics:
yarn: Noro Silk Garden in color # 239 (more yardage) and # 203, 2 balls each
pattern: Noro striped scarf as made popular by Jared
needles: 4.5mm straight Rosewood (my only pair)
size: before washing: 6" x 81" it's long Baby
I've cast on 39 stitches, for the edge I did nothing special. I knit the knit stitches and purled the purl stitches. I like it that way.
start-finish: December 1 - 11 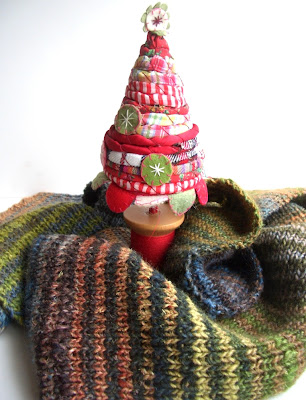 Yesterday we had a snow storm. When I got up early in the morning I expected there to be lots of snow, but it didn't even snow yet. I thought the weather guys got it wrong again, but no. The snow came later, and of course me and the doggies had lots of fun. 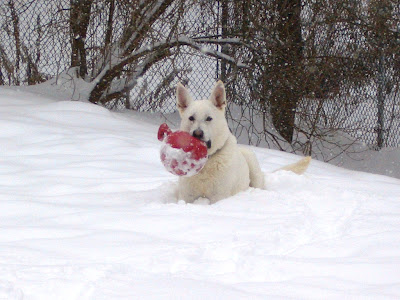 Sam likes to rest in the fresh snow. In case you are wondering, the snow shovel is OUT. Every time he played with it his mouth got all bloody from the jagged edges. I was really surprised that he let me use it to shovel a little path away from the door. Normally he goes all crazy when I use it. I guess he'd rather have me shovel the snow. 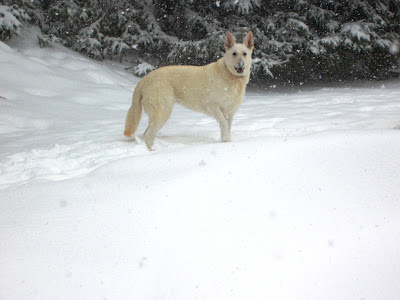 Biko was busy scurrying around the pool, when I called her. She stopped mid stride and looked over. So, she CAN listen, she's got no problem with her ears. That's interesting. :o) Her nose looks white, because I caught a snow flake on camera (or I should say many) right in front of her.

Pictures taken at 8 AM this morning (from my kitchen window), what a wonderful sight! 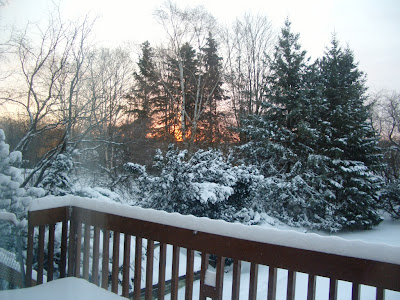 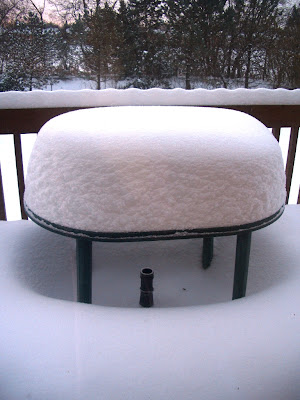 That's it for today.

Stripes in silk and pups in snow. Your blog has it all.

oh it looks gorgeous as does the snow!

I'm convinced. I have to make that scarf. But that will definitely be after Christmas. Love the photos!

I agree with you about the Noro. You're scarf looks great though so it was worth it to pull out all the VM. I love the dogs in snow pictures!

it is just lovely. scarf and snow. i wish we'd get snow like that here. we get "snow" and then the entire city shuts down. i do like the snow days, but it's not real snow we get...

Your scarf looks gorgeous! I felt the same way about Silk Garden when I first used it but I really can not resist the colors :)

I should have taken some photos too before we did all the shovelling. If the winter goes like this for three months, it's going to be rough. And there's still lots of wind today.
I'll have to give some thought to the scarf since it's so pretty. But I can't deal with scratchy.
Gillian

Wow, talk about snow and having to shovel it. This morning I had to scrape my windshield. How is that for one or two nights of frosty temperatures. But that will probably be it. OH, nice scarf, btw. :)

Ah, what great photos for a Monday! I love seeing sam and Biko - they look like they are having so much fun in all that snow.

THe scarf came out great!

Too funny about there being nothing wrong with Biko's ears. Mr Puffy also has selective hearing. Your scarf is gorgeous - the Silk Garden is one of my favorites to knit with. It's rustic but beautiful and elegant. Cute tree - it looks like a pin cushion. Great find.

You deserve such a fantastic looking scarf! glad you are keeping this one. The sunrise photo is beautiful... stunning.

I thought you'd taken the shovel away from Sam for that very reason, but I've seen how very fond of it he is.....

The scarf looks fabulous! I am knitting with the Noro Silk Garden, making a quick and very easy scarf, The Tilted Squares from New Scarfs...I too think the Noro is very over rated. I have been picking out straw and other strange cling-ons. In the same color way and dye lot I was amazed how two skeins were so different... Happy Knitting...

LOL As much as I hate making scarves I do recognize a real beauty when I see one! :o)

Love your Noro scarf. Of course you probably already know...how much I love simple knits. Love the two colorways put together for a really great effect :)

My Mom would love ya! She is a lover of unique scarves. Great sunrise by the way!

Love the scarf. I think I might just have to knit a Noro scarf for the New Year.

Thanks for you nice comment on my blog. I've been drooling over the beautiful spinning fibers you've been working on. It's been so long since I have spun anything but natural colored stuff. You've inspired me to get the dyepot going.

That is a gorgeous scarf! I love the color combinations and the stripes.

You dogs really love the snow. Mine would get buried in all that snow. Have fun!

Gorgeous scarf! If I ever get around to knitting myself one. *sighs*

Oh, and would please send some snow over to Munich?

Beautiful!
I know what you mean about the itchy neck thing though - I never wear my Silk Garden Argosy for that exact reason!

The scarf is certainly gorgeous! I have been eyeing it for some time but I don't know if I can bring myself to knit it because of the ribbing.

Isn't it true that once you start spinning, a lot of commercial yarns just don't do it for you anymore? I have a much more critical eye of what makes a good yarn now. :) The Noro colours are stunning, but the yarn...meh. I have lots of it in my stash, though. Pre-spinning stash.

Well, I like your scarf very much. I also made a (small) Noro striped scarf and had the same 'problem' as you when the colours were at some point the same. It doesn't bother me.

Lovely pictures again of your dogs in the snow!

Great scarf colors for this time of the year and the snow is so pretty. We rarely seen any down here.

the dogs look like they are really enjoying the snow!

Amazingly beautiful scarf! I'm glad you're keeping it for yourself! Wonderful snow pics!

Hi, I just came to take a tour, I am visiting vie Sockmania page. I thought I might get a glimps of December snow and instead got the real deal. beautiful pictures of everything, yarn snow pooch...hard to decide what is more interesting. ;)