First I have to tell you, that I'm overwhelmed with your response to my Kathrine Hepburn Cardigan! Thank you all so much for your wonderful comments! I do love to read them. It's a wonder to me, that so many people seem interested in what I do and take the time to let me know. It' s quite a nice feeling, I must say. But the big question here remains: Will it fit Hannah? We'll not know until the end of July.

The day after I finished the cardi, I took a break from knitting, and spun up 4 oz of the May instalment of the Spunky Eclectic Fiber of the month club. It's called "Nightshade", and it's Coopworth fiber, real, honest, scratchy 100% wool. I LOVE the color she dyed here. I wanted to preserve the colors as much as possible. 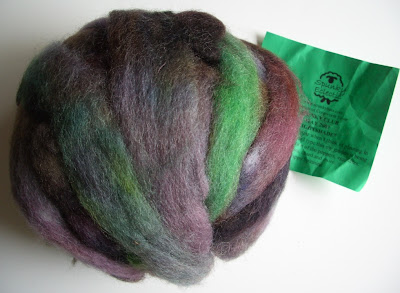 That's why I decided to give Navajo plying a try. I've read about it, I saw some pictures on how to do it, but have never seen somebody actually doing it. I needed to know how to get started, and after that all hell broke loose. I did prepare the roving, but it was stuck together from the dyeing process pretty good. I fluffed it up as good as possible, but still while spinning, there where places I had to use force to get it apart, and that was NOT because the twist ran up into the fiber supply! As a result the single had too much twist. Seeing me Navajo plying was not a pretty picture. I think two hands was not enough, I could have used a third or fourth one easily. I'm sure I did something wrong, it can't be that stressful to do. Because of the over twist, it was a right mess to deal with it all. As soon as the bobbin was full, I sighed a relieve, and broke off the single. I had quite a bit left, but was sure, that I would not Navajo ply the rest. Needed a break from that one. I had a little bit left to spin and decided to 2-ply the rest, which was equally hard, because of the over twisted singles again. At times I just thought I'd rip everything off the spinning wheel, but the singles where surprisingly strong and withstood mistreatment quite well. The little skein is the 2-ply and it's a little fuzzy because of all the tearing and what not. I can see the appeal of Navajo plying, especially if you like the colors in the roving. I'm not sure mine's done correctly, but after washing both, the big and the small skeins, and drying, they came out quite O.K., not too much twist left in them.

I don't know when I will knit something with this yarn. It gets put into the bin with the other hand spun yarn. Right now, I'd like to improve my skills first. 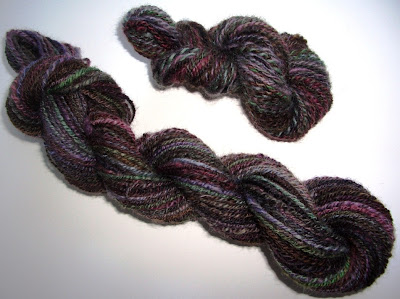 you can click this pic for a closer look
A while ago, I've asked my mother, whether she still had her sock darner, which she didn't. But she loves a challenge! Over a short period of time, she asked many friends and family members if they still had theirs, and some did, and they don't anymore, because she collected them all for me! I had to laugh when she told me, that one of her friends, didn't really want to part with hers, but my mom can be very persuasive (short of using brute force). She asked her friend how many socks she's darned lately, and how many she was planning on darning in the future (the friend is about 80 years old). Well, the next day, she brought the sock darner. I don't even know which one it is! They are all very different age. There are a couple or three real old ones. 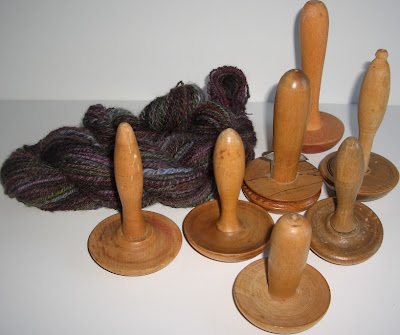 My mothers was painted on as well, but it's not this one. Some are very plain, others have a hint of some decoration. 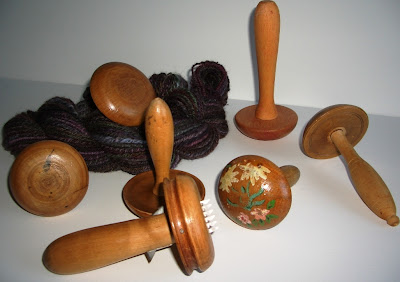 One, a very old one, has this metal thing coming up if you want to. I don't know exactly how this works or what it is for. I did learn how to darn socks when I was young, not at school, but from my grandmother. I know my mother darned my fathers socks too. Well, all I wanted was ONE, now I've got a whole collection! I do know four of the donors though, that's nice. Oh, and I can tell, that some of these mushroom like darners got used a lot, and some barely, if at all! ;o) 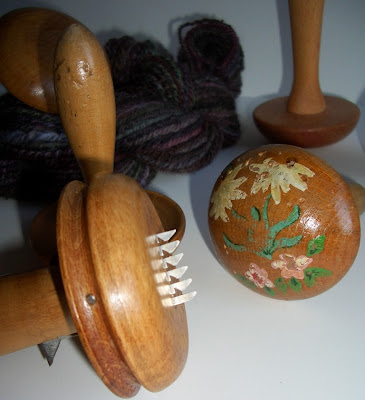 On the knitting front: I did get the invitation for the Sockamania KAL, yeah! We'll get the July pattern tomorrow! I'm really looking forward to this one. I did NOT start anything new,but have been knitting on my squares. I'm on # 37 of 40!!!! I really, really, DO want to cast on for something totally different and new, that's were the socks come in handy. I'm determent to finish the blanket for Hannah to take with her this fall.
I've been spinning natural brown BFL, which is wonderful to spin with. As soon as the bobbin is full, I have to spin some of the golden yellow BFL as well. After that is done, I'll put the Jumbo Flyer Kit on the wheel and ply everything. Until that is done, nothing much to show.
I've got some new yarn and roving, but I've got to take pictures first, so I can show you some of it!
Today is Canada Day, celebrations going on, left and right. I don't like the fireworks though, Sam's' really scared. We also have water use restrictions, no outdoor water use right now. It's been over a month that we last saw some rain. Can't fill up the pool, can't clean the filter either, need water for that.
I wish for some rain. The temperatures are wonderful today though!
Alright, until next time, stay cool, keep spinning, knitting ................... ;o)
edited on special request by Kelly:
After looking high and low for a sock with a hole in it, I found one! I thought this would be easier, but we must have thrown them out, and this is the last of it's species. It's a sports sock, which I don't mend. I wont here either, but I just wanted to show how your take a sock and pull it over the sock darner, before you start in on it. 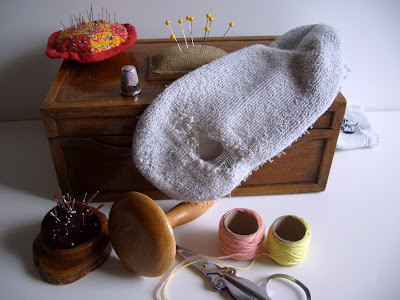 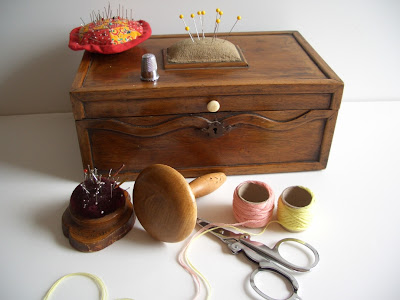 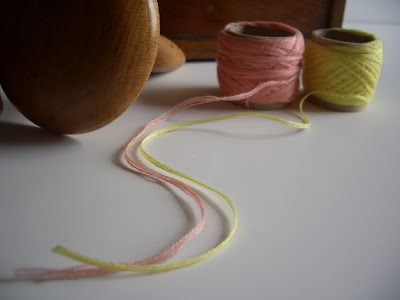 The yellow and rose thread is real mending/darning thread, I brought here with my sewing kit, many years ago. I don't know why these colors. Normally you use the color closest to the sock. It's a thread of 4 strands. Sometimes we used only two or three strands. They are easy to pick apart. 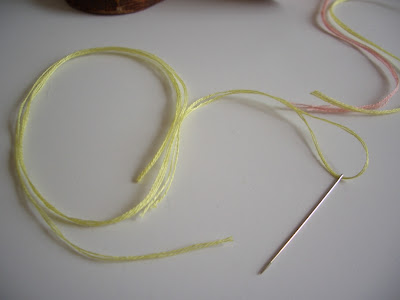 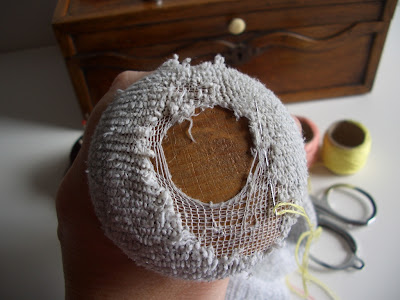 I don't think anybody would mend this big hole on a sport sock. You would go up and down with the thread, and then you would weave from left to right. It's been ages since I did this last. As a kid I quite liked doing this, but of course it was play for me.

If you would like to mend your knitted socks, you would use the yarn you knit them with.

Hope that gave you some idea, Kelly!

I'm sending all my rain to you if you send me SOME of your sunshine k??
Now you do realize I've never heard of a sock darner before and I now NEED to know how to use one!!!
SHOW US PLLLLEASE!!!!
Can't wait for that sock pattern!

How generous of your relatives and mom's friends. I've never darned a sock nor seen a sock darner in use.

Wish I could ship some of our rain to you. It's been crazy here every day with horrible storms and downpours.

I LOVE your new "collection"! I have 3 but mine are egg shaped. I use mine every time I graft my toes!

I've told you all along but the KH sweater is STUNNING!!

well sir that is pretty neat! i'm gonna have to ask me mum about it tonight and see if they ever had one. i'm gonna keep my eyes peeled for one in antique sales.
Thanks Monika!

The navajo plying gets much easier after some practice. Just try to treadle reeeaallly slowly, stop treadling if you get too much twist built up, and let the extra twist run up into the singles a bit.

The darning eggs are also good for kitchenering sock toes!

Love the sock darners they make a great collectibles.

We called them darning eggs and I have two, I think. They're absolutely egg-shaped with a handle. I grew up with them and we definitely mended socks. Plus my sister made all my father's socks.
It's fun the way blog postings bring up memories.
Gillian

What pretty yarn! I love those sock darners; they are all so unique! Thanks for the visual on darning.

Oh, I've nominated you as a rockin' girl blogger!

A sock darner would be a much used object in my house. I can't believe I never even thought of getting one. My husband wears holes in socks like crazy! :D Thanks for the tutorial too, this will definitely come in handy.

You mom certainly knows how to persuade someone to part with something. And she got you a collection! I've tried that with my mother...doesn't work no matter HOW many hints I drop her.

Sunny and dry here. Every so often it looks like rain but..nope. Nothing. I wish we had some just to cool it off a little.

My mum used to darn socks, and my nan knitted socks. They are small works of art in themselves, aren't they???

You are becoming quite the professional spinner aren't you??

That's a lot of darners. I have one very old one that was my grandmother's...not the mushroom type, more egg-shape I guess. I'll have to take a picture of it to show you some day. Darning socks (a dying art) is a very good skill to know.

Hopefully it'll fit her. It's too gorgeous not to.

Nightshade is scrumptious! I LOVE that colorway!

And wow. I don't think I've ever seen a darning egg/darner/sock fixing thingamajig in action before.

This is my first visit to your blog, and I must tell you that your Catherine Hepburn is nothing short of spectacular! Happy knitting.

I've been looking for a darner! My mother had an ugly orange plastic one, I never knew they came like yours! One of my knitting friends carries a lightbulb in her knitting bag for grafting toes, I'd like to get her something a little safer, LOL. Wal-Mart doesn't have them, and I forgot to look at FabricLand. Maybe I'll look in the antique stores too!

My friend stretches the sock toe over the bulb and uses it to hold the stitch taught so she can see them better, I think. I put one finger between the two needles when I graft, but I can do it pretty mindlessly now. Thanks for your comment :) I didn't think it'd been so long since I'd been here, but I realized I dropped in on this post when it was new but got distracted and never got to read it all! Gosh, you knit faster than I can read what you've knit!