First finished sock of many first's. 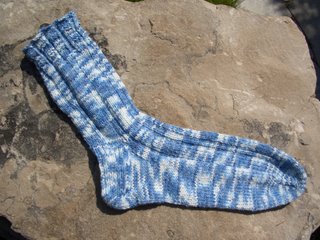 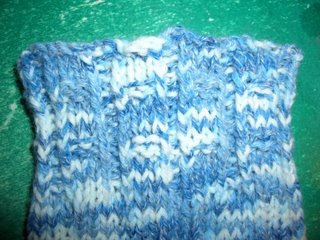 This sock is mens size 12 1/2 and I'm alreday working on the second one. In the future I will knit both socks at the same time on DP needles. I'm just waiting to get the new sets in. I will use the magic cast-on in the future as often as it's possible. I've increased with M1 (make a loop) and it shows no holes, it's almost invisible - I like it. As long as I'm knitting toe-up socks I think I will use the reverse dutch heel method as well. The sewn casting-off works great too!

Supplemental: I will put a description of the socks in my free pattern folder on the side bar for those who would like to try a toe-up sock with a different heel version ( as opposed to the short row heel).

I love the heel treatment that you've used. One of the main reasons I haven't done toe up socks is because I am not really fond of the short row heels that most people use.

It would be great if you could write down how you did this sock - and share it with the rest of us ;-)

That's a really great looking sock. It looks like "firsts" agree with your knitting.

Now I have no excuse to put off magic loop knitting, toe up knitting....sigh...wait, I still have umpety gajillion other projects ahead of that in the line-up! Whew!