About Robins, and Cheekadee's ...no knitting whatsoever!

The other day, Biko was outside, on the balcony, by herself. She's got access to the house, whenever she feels too hot, or thirsty, but rarely comes in by herself.
I was doing something or other inside, when I heard a thump. Of course I had to investigate at once.
When I stepped out on the balcony, Biko was standing over a bird, sniffing it. As soon as the bird moved, she took off, and ran to the other side of the balcony, where I joined her. We both are scared of birds, it seems. The bird must have flown against the window, and fallen on her, because it was on a matt, where Biko's sleeping on most of the time.
We watched it for a minute, and I saw that it was wobbly, but alive. I took Biko inside, to not stress out the bird, which was a Robin, any more.
I looked out through the window, from time to time, to see how Robin was doing. At first, the wings where spread out, and it was lying on the side. As time past, it was shaking it's head, but stood on its feet, later it sat there, wings tucked in, and not shaking anything anymore. But it was still sitting there, doing nothing much. Must have had a bummer headache. O.K. I know nothing about birds.

Next time I was looking outside, I couldn't see it anymore. That's when I opened the door again, to check if it was really gone. Yep, nothing left, but a splash of bird poop. I was very glad it got away.
Yesterday late afternoon, it was hot and humid, like all get out, I was feeling cold, from the A/C and went out on the balcony to warm up; dogs followed me out. That's when I saw the sunshine, illuminating a spot in the yews, which happened to be a bird's nest. I knew the bush housed several birds, because I saw them coming and going, and sometimes fighting. It was always a lot going on in there.
I got my camera, poor thing, that was just a job, it was not meant for, but I'm glad I got the pictures I did. (I wish I had a better camera.) 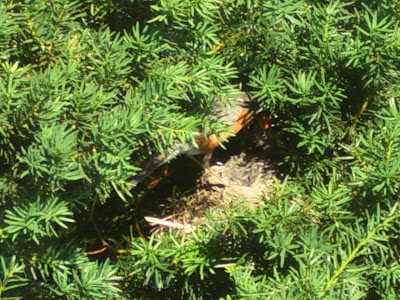 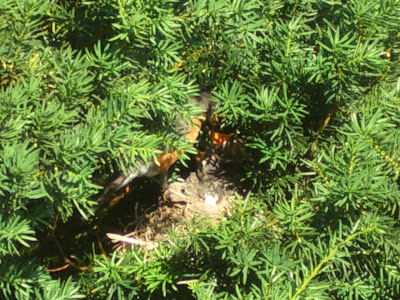 I imagine the Robin on the balcony was one of the parents, this little fellow almost lost. Can you see the big, orange opening, waiting to be stuffed? There's only one baby Robin in the nest, as far as I could make out.

After feeding the little one, Robin just sat there, on the edge of the nest, bill open, taking a break. There was also this little fella, taking a sun bath on the sun screen: I think it's a Cheekadee. It ruffled it's feathers, and spread them out. Not only we humans are bothered by the heat, or did this bird enjoy it? 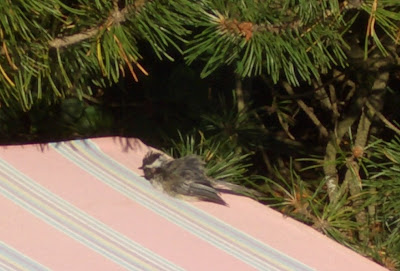 We did give the dogs a bubble bath. We all got wet to the skin. Sam was not amused, but in the end I think he liked it. Now, today will be a major "brush the dogs" day. Sam seemed like he's doubled in size over night. He really got "poofed", and now I need more than two hands to hold him still, and brush him. He must be itching like crazy, but he's so white, and good smelling now.

Biko didn't poof as much, her coat is different, but she too, smells good now, but for how long?

There is nothing worse than a wet dirty dog smell.

The poor Robin! I had a bird hit our window yesterday which I don't think has happened before. I love when Nimitz gets bathed and smells good for a few days. He doesn't run around nearly as much as yours do though. I'm trying to imagine a puffed up dog now. You'll have a get a photo of how much fur gets brushed off! :-)

Lovely photos - it's amazing how you were able to get such good pictures of the feeding. I'm glad your story had a happy ending.

I'm glad the robin was ok!

I'm so glad the robin was ok.

I can just picture Sam the puff ball :). I bet he loves being brushed out.

I agree!! We sometimes get sparrows inside and they frighten me too, Harki runs about protecting me and Peri wants to 'play' with them. Poor Biko, what a shock!! There was a muddy 'bath' in the creek here today!! Poor Sam, a boy doesn't want to smell nice and clean!!!

I'm so happy your robin recovered!! Glad baby wasn't left to fend for itself...that would be heart breaking :)

Glad there was a happy ending!

The robins used to get drunk on the pyrachantha bushes next door and then come over to our house reeling drunkenly off the picnic table and occasionally flying into the sliding glass doors. It was pretty funny.

Glad the robin recovered! Nice photos, really cool to have seen that in person!

Clean dogs are like dusting. It just doesn't last.

What a story! The pictures are beautiful.

You're a braver girl than I am. I've been thinking about bathing my two, but then I think about trying to get Timber combed out, not to getting him dry to the skin--that's practically inviting a hotspot--and think "welllll, maybe not..."

You are surrounded by so much exciting nature! Glad the robin was ok.

It IS a chickadee, and they (and many birds) like to sunbathe with their wings spread out. Adorable!

Love your blog. The photos are gorgeous!