Before anything else, and before I forget, I wanted to thank you all for your commends on my Morning Surf Scarf! It was overwhelming! Thank you so much! ;o) 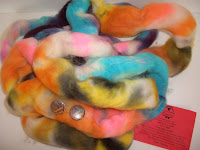 This is Spunky Eclectic fiber of July "Celebration". I didn't like the colores, even with the orange in it. The fiber is Shetland, which was very nice to spin with. This was a little careless spun, because of the color, and produced ~ 190yds of worsted weight yarn, with thick and thin places. Not my best.
Fascinating though is, that you'll never know how the knitted fabric will turn out, and I must say, I'm somewhat reconciled with this "Celebration". I wanted to make full grown mittens, but didn't know if there would be enough for a pair, so I played it save and made some fingerless mitts. They turned out a little big, and I DID a swatch, measured my hand to make them fit perfectly, but I guess the uneven spinning is to blame. So I thought I'll felt them by hand, just a little. They didn't shrink enough though. 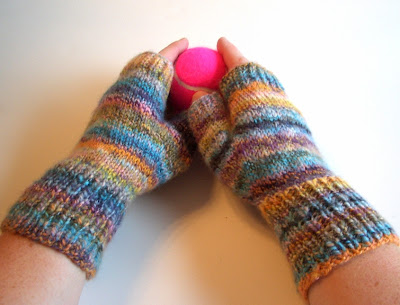 They'll do fine though. I like the cuff longer, 2inches is never enough, I made 3 inches. Would have done more, but wasn't sure of the yardage. Anyway, they are done, the yarn is out of the way, and you can never have enough mittens around here. 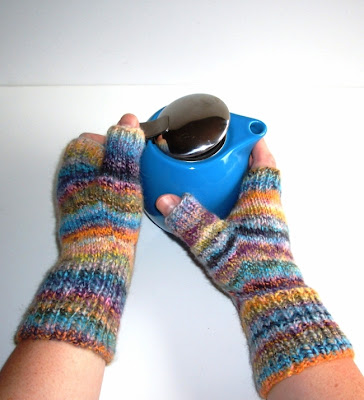 This little tea pot is my husbands. He's got it for his birthday ( from me), I think it's totally cute. 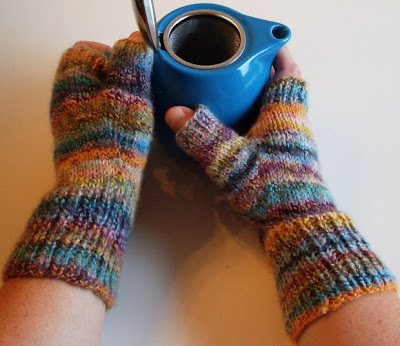 I've been working on a lot of things. Some things I can't show you, since they are barely begone, and Christmas gifts to boot. Sorry.
For another finished project, which was a gift as well, I don't have pictures yet, the recipient hasn't got it yet, hopefully she'll get it this week and is quick with sending pictures (if it fits at all).
And, I've been spinning up a storm. I haven't touched my knitting needles in two days, because of spinning. I've started this wool/mohair blend some time ago, can't even remember when I finished the first bobbin. Now it was bugging me, and collecting dust on my coffee table, enough, so that I forced myself to get going on the second bobbin, which is now done as well, since last night. I didn't think I would make it, had to take several breaks, because my fingers cramped up, and my right knee hurt like hell, but in the end I did it! Now to do it all over again, a third time - oh goodie! It's going to be a 3-ply sock yarn. It's about 250g, so I guess I'll be able to make 3 pair of socks, if I want to. We'll see how it turns out. 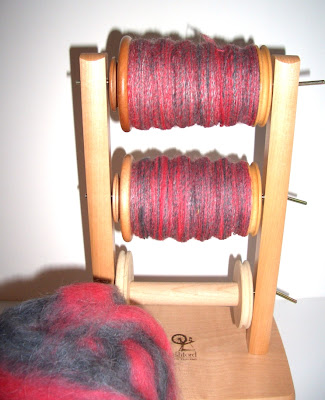 As an aside, I'm a little dizzy, and I'm starting to get a light headache. I tell you, don't operate spraying cans, right after you get up in the morning!!! Huh? you ask yourselves.
O.K. I'd like to be able to afford a maid, that said, I had a lot of cleaning to do this week. There will be a service man coming to look at the furnace. Our house is housing two large dogs, and it's not easy to keep those hairs under control, and there IS a certain smell. Usually I don't care, but for some reason, I didn't want the poor guy to be overwhelmed with doggy smell, so I purchased an air freshener out of a spray can. I don't use that normally, maybe that's another reason for getting a full blast of it directly in my face, the other was being so tired. Now I smell real fresh too! ;o) Hope he'll be here soon, otherwise I'll have to do another round, and that scares me. ;o) On the other hand I'm fully awake now, so nothing bad can happen to me, and the bad, bad spray can has no power whatsoever. Enough said.


The next subject is a wonderful one. On October 11th, I received a package. Sybille remembered my birthday, that is, she knows that it in November, but last year it came too late, so she calculated and sent it earlier. Only this year, it was here after 5 days!!! (not weeks like last year). So I've got an awesome early B-day present! 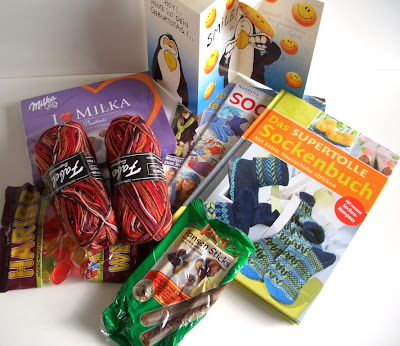 Sybille was very generous, and seems to know me well. I've got wonderful Sock books, lovely sock yarn, my favorite chocolate (Milka), gummi bears, and even some treats for Sam and Biko, and a lovely card as well. Thanks again Sybille! 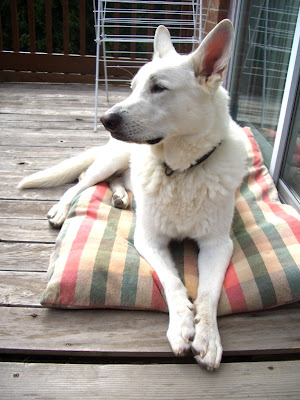 To round it all up, here's a picture of Sam soaking up some sunshine on the balcony. Right now, both of them are doing well, no major boo boo's, skin infection cleared up nicely, everything is alright. Hope I didn't chinx it.
So my friends, I better get going, so that there will be something to show soon. I'll do my best. Bye for now! ;o)

The fingerless mitts are beautiful - I love the combination of colors! Whenever my mitts turn out too big (like the recent pair), I just give them to Dave - easy solution! (although felting would work too - I just didn't think of it)

I think the mitts came out great. (so did the scarf!)

Totally great colors! it amazes me how roving that looks a little suspect can be spun into spectrum heaven. Great! I love the little teapot, too. Where is it from?

The fingerless mitts worked out beautifully. I'm surprised with the colors of it all. I didn't think it would turn out so nicely striped. My husband used to drink tea. His grandmother was from england and always had a cup of tea ready for him when he came. Then he met me, and started drinking coffee. I

I totally love the mittens! The colors are beautiful ~ and go so well with the tea pot! Love Sam's ears - that's why they make such good watchdogs.

Great job on the fingerless mitts! I'm definitely going to do that with my Forest Moss, too. ;-)

I love those fingerless mittens! what a great idea!

Those mittens look great. It's interesting what a difference there is between the roving, the yarn and the knitted project. And imagine, there is another pair of mittens in the making ;)

The mittens are lovely, I'm surprised cause I thought the roving would make ugly yarn, but not it's very beautiful.

I wasn't particularly fond of the roving either but the mitts are wonderful!

Oh, I really like the colors you got out of the rovings. The mitts are beautiful.

I hope the service man made it before you had to do another round with the spray can :).

Ok as a total roving junkie I thought the roving colors would work out great and they did! Did you Navaho ply?

Once again your spinning amazes me! I still can't figure out how a multi-color plyed yarn can knit up into waves of color like your breathtaking morning Surf scarf! And you did it again with your fingerless mitts! I'm going to have to work up the nerve to try it! Bravo on having the gusto to tackle spinning mohair! It's such a beautiful color too!

Proof that life is like a box of chocolates. They are beautiful.

Your mitts are beautiul!
I must learn how to spin ;)
Have a great weekend!!

I love your fingerless mitts and your husbands little tea pot is so cute. I love it. Something tells me you use it as much as he does ;)

Ooh! Pretty fingerless mitts! Did you have a pattern, or did you just make them up? I can't wait to see the socks you'll knit with that other yarn. Your upcoming B-day presents look fun! Sorry the spray made you dizzy; I get the all-natural sprays at the health food store, and those don't make me as ill.