I was torn between posting today and not posting. Well, guess what won? I'm in the claws of PMS over the last few days, and it sucks (right the life out of me).
In addition it's Monday! Least favorite day of the week, and the comfort shawl is turning into a monster shawl. I was sure I would have finished it by now, not so. I am at the feather and fan part, changed color, but with over 400 stitches each row, and increasing, it's just slow going. This was supposed to be an in-between project, while I was waiting for this 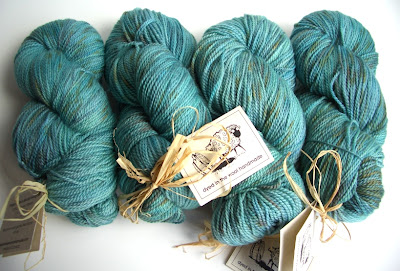 gorgeous yarn. It's here, and I'm itching to start the new project. It's custom dyed by Maggie of Dyed in the Wool Handmade, and she did a fabulous job! I told her what I wanted, and it turned out great. More about that when I'll get started on it.

There are a million and one projects waiting to be done, WIP's, yes I have two, not counting the comfort shawl, and the waiting list is getting longer and longer.

I should be happy, but that darn hormones wont let me be! It snowed during the night, as well as this morning. Everything is withe again. I already had my fun in the snow, well, the doggies did too. But, my thoughts are aimed at tomorrow, when we'll bring Biko to the Vets for x-rays of her hips. It's not getting better and even with Metacam once a day, she's not comfortable.

Another reason why I'm cranky is, that I had a horrible night. Actually it was the second one in a row. The night before, was like an episode of "America's most wanted". The helicopter circling over us with the search light on. Cars racing up and down the street, yelling, more yelling (how many ways can you say the f*** word, I think I've heard them all last night), car doors banging, and what not. Nobody knew what was going on, and I was loosing my beauty sleep.

Last night, we had none of that, but Biko was (cranky too) not shutting up, and kept my already insomniac son awake, so she came to stay with us. Sam was not happy and complained as well.

My spinning project didn't turn out the way I wanted, still not done with the second skein, but I'm at a loss, as what to do. This is definitely making me cranky! And time is getting short too!

Hm, what else? Well there are other reasons as well, but I've just now decided that it's enough for one day.

Here's something which makes me happy (I don't' do memes but this, people, is very personal): "Backerbsen" - "Soup Pearls" - "Knabberbolletjes" - "Pates "noisettes" - "Zuppa reale"!

The store where we buy European Brand names groceries didn't have them in month! So, when we saw them in the shelves, there was no holding me back. I had to stock up on it, because who knows, when we will be back there, and I'm 100% certain, they will all be gone by then. And I DID leave some for others, I'm not totally mean, even though I was cranky at that time already. (14 packages, 200g each - Ha!) 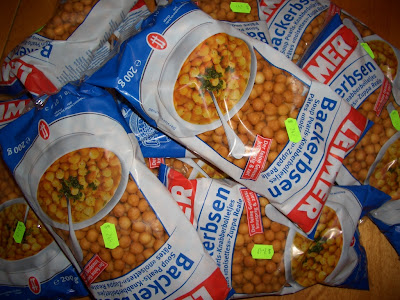 I DO share with my close family members, but they pretend that they don't like it so much, so there's more for me.

edited later: O.K. for those who don't know what I'm talking about. Soup pearls are no health food, but deep fried dough. They look like chick peas, but are crunchy little balls of dough; you put them in any kind of soup, where ever you like them. On the package they say you can eat them as a snack, but I don't' do that. I used to give them to my kids sometimes, when they were little and couldn't even walk, just to munch on something. They are ready to use. They get soggy pretty quickly, so when you eat soup you better shut up and concentrate on eating, unless you like them soggy. :o)

Anyway, my mood must have rubbed off, because Sam's been a little moody lately too: 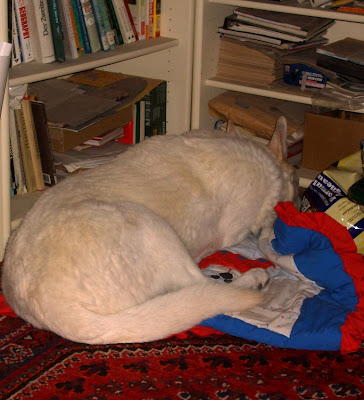 If it were as easy as that for me, just stick the head in a corner, and sulk, until all is well again.
Posted by Monika at Monday, January 14, 2008

So...what are these Soup Pearls? The pictures make them look like chick peas, but I'm sure they're not chick peas. What are they?

Sorry everyones in a bit of a funk. I hope you get good news from the vet tomorrow - maybe they can try some different medication? You will have to show us what you make with your European goodies - I have no idea what you are talking about. That yarn is gorgeous!!!!!! My guess is a sweater.

Damn hormones! They sure can mess with your emotions and mind!

Hopefully things will return to normal tomorrow and the vet can make biko more comfortable and Sam will come out of that corner.

Well, from my blog post you can tell I am right there with you. I hope you get to feeling better soon, if not you may want to try Sam's trick--it may work. I love the yarn you ordered. Very spring like and calming. Ahhhh.

Mmmmm, that is Gorgeous yarn, beautiful colours I see in those skeins!
Hormones... bleh. I am SO glad to be on the other side of all that, seriously... I get an occasional whisker (TMI?) and that's about it. There are still mood swings but so mild and subtle now.. what a relief it's been!
I also hope you get good news from the vet tomorrow.

The colors in that yarn are amazing!

Wanna see cranky? Come visit me this week. I'll join you and we can send the whole world to hell and back. I just had it with my kids again too. Being a temporarily single parent sure doesn't make it easy, when it comes to authority in this house. Oh, and, I love the yarn. After all, this is a knitting blog, right? Hang in there.

I love that yarn!

I hope you feel better soon...

Gott in Himmel! When it rains, it pours. One consolation? That awfully gorgeous yarn!

Here's hoping things get back to a comfortable level of "normal" very soon.

Hang in there Monika! Rough days never last forever. I hope things get back into line for you soon! Take care! :-)

I am happy you decided to post this because it is a nice one to read.

Sorry to read your are a bit cranky. I guess not every day can be wonderful. But I hope you feel better soon.

Strange story about your 'America's most wanted' night.

The yarn is lovely!

Can't wait to see what you're going to knit with that beautiful yarn. I have never heard of soup pearls...sounds delicious. We just use the little "oyster crackers" (mini saltines)in our soup.
Hope you and your boys will be feeling better soon.

Bwahahahahaha--that picture of with his head in the corner is great! I often feel that way. :-^)

Your Soup Pearls sound a little bit like oyster crackers--at least insofar as they're small, crunchy things you drop in your soup. Do they have a specific taste?

You have my sympathies about PMS. Guess that's one good thing about getting older--you stop having to deal with that. I hope you're feeling better soon. Sam and Biko hugs should help a lot.

Oh, lol at Sam! with his head in the bookcase. Sorry to hear about the horrid night and the hormones and general yuckiness and mostly the bad shawl! Too bad it had to be ripped out but you know what's best for it.

Sorry about all that lack of sleep. The hormone thing drives me nuts too; can't get anything done the way I want it.
Those soup pearls look yummy... My bf stocks up on his hometown "soup nuts", but they are little squares of dough.