This square cake has no calories, but lots of fiber. I guess I should have made another bag, instead of eating Tiramisu tonight. Oh well, the New Year with its resolutions will be here soon enough, and who wants to diet anyway?


This cute little bag was designed by Jairlyn Mason and the pattern can be found here. As soon as I saw it, I knew I had to make one. I made the larger version.


Yarn: I've got lots of different colorways of "Endless Summer Collection Luna" in my stash (elann.com), and I like this shade of blue, as well as the shiny thread. It's viscose and cotton blend. I wanted some kind of cotton, because I believe it will hold up better. I used only 2 balls (50g/109yds).

It turned out 11" wide and 8" high without the handles. I made the handles 5" long, instead of the 4" called for. They are still a little too short for my liking. But I've used this bag and it's alright. It holds the wallet, keys, some tissues, and a few other small things. It's not big, but sometimes I don't want to lug around half my house.


I was worried about the stitch pattern not showing up, and how the yarn would react to blocking. It's not wool, but it held it's shape after blocking. The stitch pattern is as good as it gets with purl and knit stitches. Not bad. I like the whole bag a lot.


Oh, and of course I had to sew a lining. Not my favorite thing to do. I didn't want to get the sewing machine out, just for that, so I sewed the side seams by hand, ironed the lining and sewed it on by hand. There was a little dilemma, because I didn't want the stitches be seen on the outside, but since the lining was light green, you can see the blue thread and the stitches. Oh well, am I a perfectionist? No chance!


The original didn't have any buttons on, but I couldn't resist. As I said, I like this bag a lot, and can see me making another one in the future.


The pattern is well thought out, and well written. It was a pleasure to follow the instructions.


I might point out, that I did NOT choose the orange yarn I have in my stash for this bag, although I had thought about it.


We had wonderful snow fall today. Thick, fat, wet snowflakes. I had a great time with the dogs outside:
Biko - unflaggingly returning the ball to be thrown across the pool as far as I can. By the time I pick the ball up and throw it, she's halfway around the pool already, so I have to think quickly to get the most exercise for her. I tell you, she's tireless, and can on for longer than I want to. 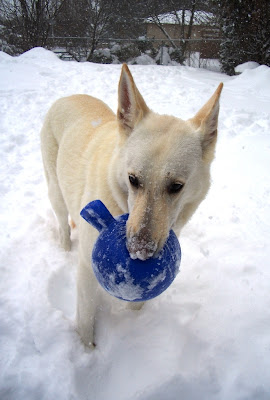 Sam - he's hard at work, punishing his big bad ball. He's so funny. Every time I manage to get the ball away from him, and throw it, he goes after it, and chews the hell out of it, for at least five minutes, at which point he's ready to wrestle with me again. 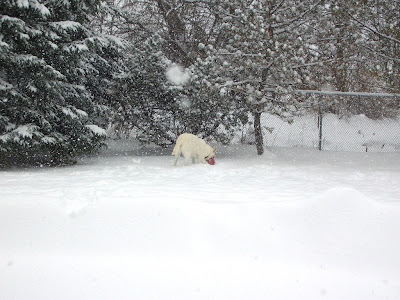 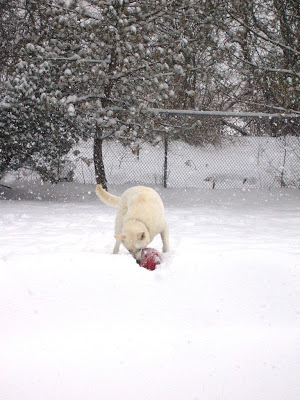 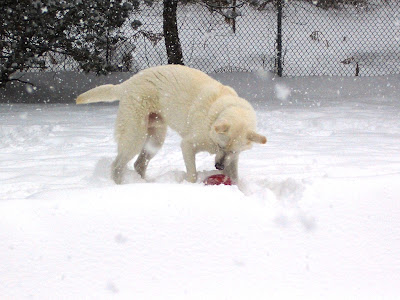 The bag is cute! I never would have made it based on the pics on knitty. Funny how that works...

Love it! I looks so great, and I agree--much better than the knitty pics.

Nice bag, I love the color and the stitch pattern is sticks out very well. What fun pictures of Biko and Sam.

Those buttons are just perfect for that bag. That's such a cute purse!

Sam and Biko are just so darn cute.

I love to watch dogs play in the snow!

I love the bag. I've never seen anything like it before. It's a good idea. Love your dogs too! They are beautiful.

Have a Happy New Year Monika!

Oh, the three bags (yours and the two at Knitty) look so different. I like yours and the lining looks fine!!! I am in a bag swap so this would be a good one to make!!
Love the dogs in the snow. Harki does exactly that with her toys, she likes to bite them into submission before she brings them back to be thrown again. I am fishing toys out of the bottom of the paddle pool and they ahve decided not to duck dive their heads under!!!

Cute bag, I like the yarn you chose, works great with the pattern

I like the bag! Nice color and beatiful pattern.

Lovely pictures of your dog in the snow, I am a little jealous: I would like to have some snow overhere, we have a grey and boring landscape again.

I loved that bag when I saw it and now that I see how gorgeous yours is-- I really love it! Those buttons really do the trick and finish it off well. Pretty blue. . . gush, gush, it is gorgeous!

I must have missed that pattern when it came out. Yours looks so pretty! I Especially like the buttons, great job!

What a fabulous little bag! I'm really glad you knit this one up because from just the Knitty photo? I obviously didn't give it a second glance! (this is just one of the things I love about our community!...)
Love seeing your dogfaced kids at play and that snow is so pretty!

Now I know what to do with some of that Endless Summer yarn in my stash! Thank you!

You know I didn't even consider that bag when I saw it on knitty, but yours makes me want to knit it! Very nice!

A pretty bag, worthy of that pretty roving. The buttons are a nice touch.

Your dogs are so funny. At least they are getting their exercise and so do you. I think you need to make up an even bigger version, because your fiber doesn't fit all the way. :). It almost looks like a tank top in one of the picutes.

The buttons make it!! Looks like a folded up sweater bag - I love it!

Very cute bag! It's funny how things on Knitty, Magknits, wherever, don't catch my eye til I see them on someone's blog.

Your dogs are so gorgeous!

Ever since I decided to stop knitting sweaters for myself (just temporarily) I have been at a loss as to what to knit. I'm bored of socks. Now I know what!

But from what yarn?

Your pictures are awesome!

The bag is fantastic!! I love the color & the pattern! I'm sure it will get a lot of use. It looks so pretty with the fiber peeking out!

the more i see your version, the more i want to make my own...

love the color and the buttons were a beautiful addition!

What a cute bag. Your dog is adorable. What breed?

Sam looks like he is having so much fun in the snow! I love your new bag and love the lining.

I just want to take this opportunity to thank you for taking the time to offer your condolences and giving me the encouragement that I needed at this time. I hope you have a Happy New Year! :-)

Belated Merry Christmas, and very happy new year to you and yours. I love the bag--and the Chevalier mittens! You got some lovely gifts, Monika--can't wait to see what you make with the Lucy Neatby yarn and how your new fibre spins up. What novel are you reading?

Sam and Biko are so much like the Ts--they love the snow and their balls! :)

The blue colour on your bag is beautiful!

Love the bag - such a beautiful color and the yarn shows the pattern so well. I also am impressed with the lining. Makes all the difference to finishing it. Sounds like everyone had a wonderful Christmas!

That bag is wonderful! I love the stitch pattern and the buttons! Sam and Biko are so cute! I especially love that last pic of Sam.