I'm so mad at myself right now!

A few month ago I bought some wonderful handblended batts from Stephanie of Spritely Goods. I have three colorways, did the light green "Palo Verde" first. It was also first time spinning from a batt, and it was easy, and fun! I LOVE the sparkle in it. 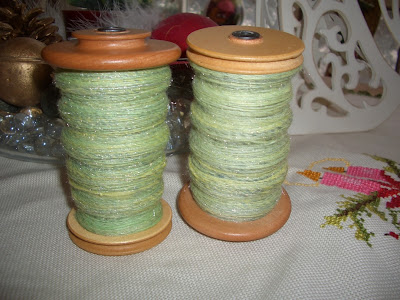 I made fairly nice singles, no overtwist at all. 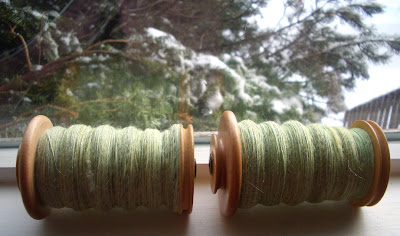 First snow of the year always makes me feel like a child before Christmas, so it gets photographed many times. 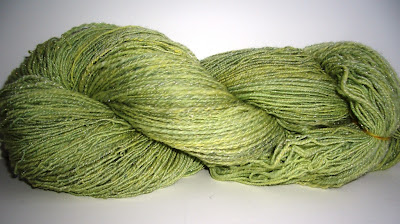 (you can click on this pic to have a closer look at the sparkly)
What I'm mad about though is, that I managed to overtwist the finished yarn. Halfway through it dawned on me, that my tensioned Lazy Kate, presumed my new best friend, was way too tight, and after one single broke once, I got it! Loosened it, and the rest of the plying went on smoothly and a lot faster as well. Now I have half a balanced skein of yarn, with the other half overtwisted. Grrrrrrr! Stupid, stupid, stupid. I love the color though, and it's s-h-i-n-y! :o)
Just in case anybody was wondering. The visit to the vet was not so bad. Sam "yodeled" from the first step through the door, until he could get out of there again. My head was spinning afterwards. Both received their vaccinations, or booster shots. Sam has a minor rash on his belly again, which we wash with some antibacterial shampoo the vet gave us. It's clearing up nicely. Biko has problems with her hips. I guess it could be from her manically running and jumping when we play outside. So she's got some restrictions, no more jumping, and we help her going up the big steps. I think I saw some improvement already, or maybe it's only wishful thinking. I sure hope it's not really her hips, don't want another surgery, but it's too early to tell. Sam, of course has to be weird, and confusing too, because whenever he's running a lot outside, and he gets his blood flowing, or when he chews on the tennis ball, which is rare, one of his eyes kind of pops a little or gets bigger than the other. It's hard to describe, and the vet only shook her head. Both Vets looked at his eyes, and found nothing wrong. I spend a lot of time with my dogs, and I know them, and notice when somethings different. At first I thought I imagined it, but my son (sceptical at first) confirmed the "eye popping". Oh, otherwise they are just fine! :o)
And also, even if this is at the end of my post, I wanted to thank you loyal readers and commenters, to take the time to comment. I love to hear from you, and I think blogging is nothing without the communication between blogger and reader, so please keep on doing so! :o)
Now off into the weekend. It's snowing right now. One more thing: As of December 5th I'm done with all my self imposed Christmas knitting! Yeah! On the needles, a scarf and a pair of socks. Pictures coming soon.
Posted by Monika at Friday, December 07, 2007

yeah, i'm pretty sure i'm not going to get any more holiday knitting done (i've got one hat done and i'm working on a birthday hat for my dear friends baby...b-day in january).

as for the dogs, we know our animals so well. try to take a photo of it next time it happens (the eye popping) to show the vet? glad to hear that they are doing well, hope that bikko's hips don't give her trouble.

Those batts are absolutely luscious!!! Can't take my eyes off that darker green one....ahhhhh

Oooo..don't worry, I've done things like that too. Except with a drop spindle. I ended up spinning the wrong way half way through, so half my skien was completely wonky. I didn't even catch myself until the end too!

Poor kids, those two play too hard sometimes. My cat had an eye popping episode when we moved. He was so stressed he actually broke a blood vessel in his eye. I'm sure if it doesn't bother him and it doesn't stick out there permanently he should be ok. But, I admit..that's a little weird. (kinda funny too..I can just see him getting all excited and chewing on his ball and at the same time..his eye popping out in unison.)

Huh. Is there any way you could run it back through and remove the excess twist? Would you know where to stop, I guess is a better question! Maybe it'll all work out when you set the twist.

Oh, the sparkles are very nice! It looks perfect to me - sorry you feel it might be over-twisted. Sending you positive wishes that the hips are not a problem. They look in fantastic shape in the pictures - but you see the little things when you live with them. Steve was an eye doctor for many years - if the eye-popping continues maybe he will have an idea of what might be happening. Have a fun weekend!

I have been lusting after some of that Spritely Goods batts for a while - might take the plunge now I have seen yours.

Monika... could you indulge in a little gentle "skein abuse"?? Like putting this into a loose skein and whapping it against a wall? That works for some fibers.

Mmmm!! That green is sumptuous! Any hints as to what you might turn it into?? Even though there is overtwist it might come out alright in your finished project. I'm beginning to find that handspun is very forgiving with regards to twist and the finished knit ... don't deny it the chance to become something - it may surprise you! Xo) But I admit Bev's comment on 'skein abuse' fascinates me....

ooooo what a pretty shade of green, I can't wait to see the others. Any idea what you are going to turn them into?

Sorry to read about the yarns, I hope you can use it anyway.

Strange story about your dogs eye, sounds a bit scary.

Oh! I have three of the Spritely Batts as well, but all of mine are in the beige colourway :) Did you try soaking then hanging your hank to dry? Usually just washing will fix any over twist, but if it's really bad you can weight it while it dries. It's very beautiful!

Overtwisted half? But so pretty!

DROOL... ;) That yarn is gorgous. I can not get over the sparkle!

So, what is the sparkle? It actually looks like little crystals in the blown up picture. Beautiful yarn~

The Palo Verde is gorgeous! You've already gotten some suggestions to try running it back through the wheel and easing some twist out of the over-twisted section. And I also agree it might knit up better than you think as it is.

I love that sparkly green yarn! I'm sorry about the overtwist... I'm sure there's some trick to fix it. Hope Sam and Biko feel better :)

That´s simply gorgeous! I really LOVE that sparkling thingy! AND it´s green!
Now you got me all worked up, I´m definitely saving up so I can take some classes and learn how to make stuff like that. Over-twists or not, I LOVE IT!=D

I wish you a happy new year by the way;)