Above is "Gothic Beauty" roving from Electric Sheep Fibers, 4oz superwash merino wool. I wanted to spin thicker, which is hard for me, and I wanted to Navajo ply, which I did. I've got only 76 yds of yarn, 8 WPI. This was very hard to spin, because the black parts stuck together and I needed brute force to loosen the fibers (I always pre-draft, and still it was stuck on many places). This is an example of how I LOVED the roving, but not the finished spun yarn. I think in the future I will not buy handpainted roving with so much black in it. I'll use the ones I have, of course. The singles where thick and thin, and that must be the reason for the small yardage I've got.
Next:
Below you see "Pie for Everyone" Spunky Eclectics Fiber Club November 2007.
Here you see some roving, which did not excite me at all. I thought meh, when I saw it, but as soon as I started spinning it, it grew on me, and I love the result. It's 4oz of Falkland wool, and it was fun to spin. The singles where a lot more even, and I think you can see how good the Navajo plying worked. I've got 131 yds with 9 WPI. I was still trying to spin thicker, which I accomplished.

I have no clue as what to knit with these, they'll go into my handspun stash box for later use.
Here's one more picture of the "Gothic Beauty" socks, which are great, and my yarn to compare, dyed in the same colorway (by Amy Shimel). I did not think I could spin the yarn so it would stripe like the sock yarn, but I though I might get enough for a hat. Don't think I have. 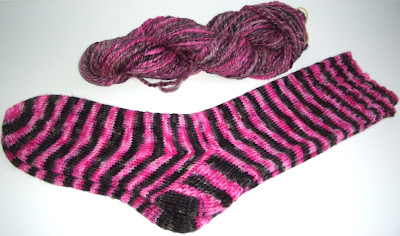 I have two finished knits to show you, but that's for next time. I have only one project on my needles right now, and those are socks. 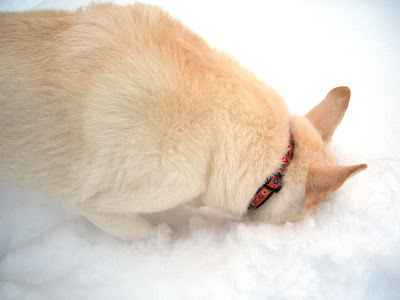 And just because, another picture of Biko sticking her nose in the snow, and Sam watching me play with Biko. 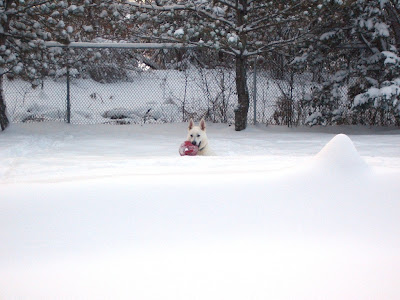 The pie for everyone looks great! So yummy. :-) And the pups look like they're having so much fun in the snow.

Your handspun is so beautiful! I don't dare start spinning or DH will implode. The pups look so adorable in the snow. What gorgeous white coats. Milo hates the snow and cold and just wants to cuddle. Tough job, but I am up to the task.

The pups are so pretty in the snow. I be that they love it too!

The Pie for everyone roving came out great. I can see that you a really becoming a great spinner!

Oh - the "Pie For Everyone" handspun is gorgeous!!!

I like Gothic Beauty, not sure what you can do with 76 yds though, and Pie For Everyone is REALLY pretty.

Very interesting to see the roving with the finished product and see the comparison between the two. I like both - but for different reasons. Looks like such fun in the snow. Soon it will be time to come in for hot chocolate.

Love the "Pie for Everyone" It seems to be appreciated by almost all of us.
And you're so good at playing with your dogs.
Gillian

...wow..If they closed their eyes you might not be able to find them. :D That's so cute. They look like they're having loads of fun.

I love the gothic beauty! Wow, do I love that. It looks so pretty spun and knitted up. I'm so impressed that it actually striped like that.

Oh, and about spinning wheels, I've tried looking for spinning wheels on craig's list in my area and I haven't found any that are really worth the money. A lot of them are fixer uppers. I'm so sad that the lady decided to not sell hers at the last minute. I'll just have to convince my husband to buy me one. :D

I really like how the gothic beauty spun up. It's lovely and goes well with the striped socks. Sure hope you have enough for a hat...maybe a headband? All of your hand spun yarn is beautiful :)

I think both yarns are very pretty. Maybe you will like the pink yarn once you have knitted it. The socks look very nice.

Your dogs enjoy playing in the snow, aren't they?

Your wool is beautiful. I ahve a question: If someone else decided to spin the same roving, would the wool turn out the same colours and pattern?? I realise ply would differ, but does the dyeing of the roving set the way it will spin up colourwise??
Love Biko and Sam's snow adventures and I do see the red ball again ,but no spade thankfully!!!

Does Sam have his shovel? Or is that a ball?

I thought your comments on the black dye parts was interesting. I've had that happen before where one color spins different then another in the same roving. It's like the dye was put on thicker or something to make it spin different.

Your pie for everyone yarn is beautiful, and I loved seeing the pictures of Biko and Sam. They look so happy.

The gothic roving looks like it has short sections of color. Which would make it a lot harder to break the roving up and spin and ply for separate colors. I like the color and the thick/thin, and think it will knit up to be an interesting fabric. But it certainly has a different look than the dyed yarn.

What about Cherry Garcia from Hello Yarn for a pattern? or just a simple ribbed neck cowl?

And I thought you didn't have time to spin? But I understand that with that much new fiber in the house you just couldn't stay away. Your pink should be enough for a head band though.

I really love your thicker spun yarn! The Pie is such a warm color I can see it in stockingette in my mind's eye! What a great texture it will produce 'as is'! Kudos to you! The Gothic is nice too but the colors or pie really appeal to me!Your success (as always) inspires me!! X]

I would love to spin my own yarn, perhaps one day! I can't wait to see that yarn knit up! I love it!

DOH! I just realised that the socks are the knitted item! Slow Sundays are had I Ireland, slow brain too! The yarn knits very very well!!!

The pie for everyone yarn is gorgeous!

That snow-ball picture belongs on a poster, it's so cute! Really pretty handspuns!

I am so behind in my blog reading, so apologize for my late response, but wanted to say how beautiful your Pie for Everyone fiber turned out. The yarn looks very even and I agree, the color is much prettier spun and skeined than it was in roving. It is hard to know, isn't it?