That's right, she's crocheting too! Ever since I saw Michelle's crochet scarf, I wanted to make one too. She's put the pattern on ravelry, it's called Circle Crochet Scarf. I think it's a neat stitch pattern. 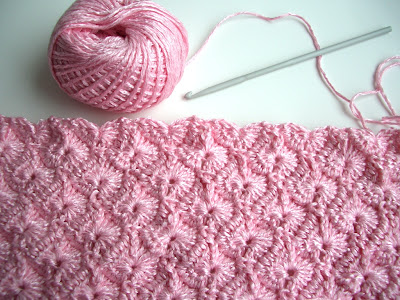 I used to do filet crochet for borders, and curtains, and panels. But that's long in the past. It's not like I'm going to neglect my knitting needles now, but once in a while, grabbing a hook, will be welcomed. Of course, since this is a different motion for my hands, they hurt like hell, especially the left wrist. I try not to hold the crochet fabric too tight. So there will be breaks from crochet, where I'll be working on these: 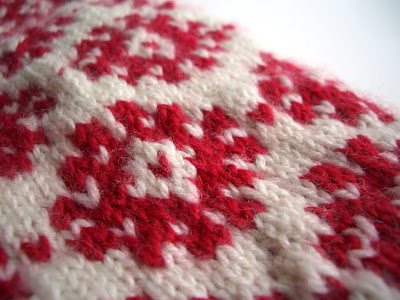 Well, all right, it's a mitten. This one's finished, the second one barely started. I took it out of it's hiding place last night, and will knit on it. I can't stand knowing that there are WIP's strategically placed in my house (three in all, including the crochet), but that's more than I can stand. So I need to get them off my needles asap.
I'm done with my selfimposed deadline knitting. I'm free to do whatever I please. That means I'll be spinning more as well. YEAH! :o)

Doggie news:
This is Sam, sleeping on the couch. He has no problems jumping up and getting comfortable, even hought he's had 7 surgeries in his life, and his front legs are crippled. He's the one, who's the healthy one right now. 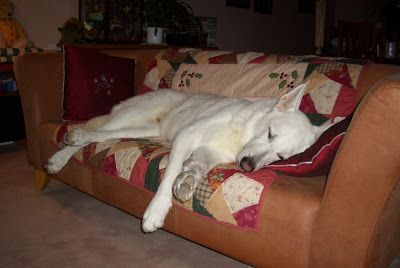 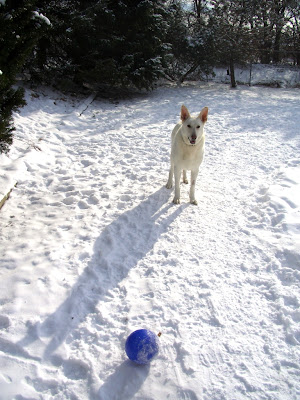 Biko, our athletic girl, is in trouble. Our Vets refered us to a specialist, after they couldn't find the source of her pain.
Last Wednesday, we went to see the Neurologist, but she too, didn't come up with anything. So more tests will be done. Coming Wednesday, Biko will have an MRI, and other tests as well as another Specialist will have a look at her. Of course there are several deseases, which are typical for German Shepherds, but I've not heard one of the Doctores mention anything yet. We'll do anything to get her well again, but first we have to know what it is.
Wednesday was very stormy, wind blew at 90/kmh. We had to start early, because the appointment in the animal hospital was at 8:30AM over an hours drive away. I put Sam in the kitchen, and closed the baby gate. My son got Biko ready and headed for the door to the garage. As soon as Sam noticed, that he was the only one incarcerated, he gave a loud high pitched bark, followed by the loneliest howl I've ever heard. He would have been home alone, making this racket. So we decided to take him with us as well. Well, he was already busy climbing over the baby gate, which is hard for him, with his gimpy legs. I got his collar with the tags, opened the gate, and wanted to put it one, when I just heard a woosh, and a white furball went past me like the devil was behind him. Sam overtook my son and Biko, and was in the car in no time. Never mind that he had to stay in the car for the drive to and fro, and in between. He slept, and was content.
Biko was out like a light too, after her examinations, and didn't even lift her head once, on our way home.
Hmm, spell check is not working. That's cruel.
Posted by Monika at Monday, February 04, 2008

Best wishes to Biko for a speeding diagnosis and recovery. Your crocheted scarf is going to be lovely.

Poor Biko! I hope that they sort that out soon and she can feel good again. Sam probably didn't need to jump on the couch - his feet practically touch the floor just lying on it.

ohh that scarf is going to be lovely!!! What an interesting stitch.
Fingers crossed Biko will get fixed asap and its nothing major. Between Biko and Hero, all these Shepards are sure having troubles lately.
Hugs to both of them.

So sorry your beautiful dogs are struggling. I hope the specialists discover the cause of Biko's troubles very soon.

By the way, I'm glad to see another knitter pick up crochet for more than embellishments. I may have to queue this project.

I am so sorry to hear one of your shepherds is also ailing! I cannot speak enough good about the veterinary neurologist/neurosurgeons! They are awesome docs for our furry friends. Hang in there. Hero & I send our belly rubs and back massages!

The crochet looks very nice. I've always been intrigued by it - but I still haven't learned it.

I hope you find out what is troubling Biko very soon. Isn't it funny how they are happy just being around no matter what is going on!

Oh Monika! I will keep dear Biko in my thoughts!! You have been such a support for me with all that Josie's been going through. I'm here for you! even if it's via cyber space. :)

I like the crochet scarf. I've never seen that crochet stitch before (although I don't crochet so I don't know when I would have).

The crochet looks great! I hope you find out whats wrong with your poor baby and they get a treatment plan together for you.

Nothing is worse than having our "babies" not well. I hope they figure it all out soon and Biko is recovering soon.

Hmmmm did I read that right? YOU have THREE WIP's!?! ;o) It's a slippery slope when step over to the darkside of project polygamy. lol

hugs to you and the babes

OMG, Monika. I'm so sorry to hear about Biko. Milo and I will say so many prayers for your sweet girl. Milo howls like Sam did when I leave him, so now I just take him everywhere with me. Luckily, everyone does this is Cody. Dogs go everywhere. You scarf is beautiful. I, too, get the urge to pick up a crochet hook once in awhile. Best wishes and keep us posted.

I hope that the vets will find the source for Biko's sickness soon and that things will be fixed. All the best!

What a lovely scarf pattern!
Good for you that you are working on something different! Crochet is fun for me too but also hurts my hands.

So touching that Sam did not want to be left home alone. They are very close - did you get them at the same time? I wish with all my heart that the doctors will find the problem and help her have relief.

I am sorry to hear about the dog troubles.

Hope they find Biko's pain causer, so she can get on with as the things she does.

As for the crochet, the scarf is beautiful pattern... Your mitten looks very fun too!

LOVE the pink. I didn't realize how big Sam was until there was a couch for perspective. I hope Biko feels better soon! I'm sure a diagnosis is coming soon.

Poor Biko, I hope they can fix her pain soon: Poor Baby. Sam is a determined fellow, isn't he?? Peri howls like a banshee when we leave her home when we go to the Vet!!! They do love each other, don't they- I know mine do too.
Love th scarf, such a beautiful pattern!! 2 WIPs?? Pshaw, that's nothing!!!!!!

Beautiful scarf - I think I may try it with some patterned sock yarn for a gurl in my house.
I'm hoping those dogs get better. It's hard when they can't tell you what is wrong.

All your stitches are so beautifully even! Is your temper equally even? ;-)

It can be so very worrisome when a beloved pet becomes unhealthy. All the best for Biko.

Very nice to see your crochet hook out of the dust bucket and in use! And I love hearing stories of your doggies, hope Biko feels better soon.

I like your crochet scarf. It cought my attention. I hope Biko is doing fine.

Crochet hurts my hand to. I don't do it very often. Your scarf is looking awesome.

I really hope that the specialists find out what's wrong with Biko and that she is feeling better soon.

Thanks for dropping by my blog, Monika.
Sorry to see your post about Biko. I hope that they get to the source of the problem soon.
That Sam is one large puppy!
And I love the pink crochet.

I love both your current WIPs!

I hope Biko is ok and feels better soon!

Untill recently I had never seen a white German Shepard, but right now there's training a pup at our dog school the same time I'm there with my big girl. And now I come across your 2. They look lovely, I hope Biko will be ok!

Crochet isn't my favorite but now and then it's fun to work on something crocheted! Love the circle scarf...very pretty color. Too bad your hand hurts from doing it :(
The mittens are lovely...can't wait to see more.
Hope Biko will be feeling better once they figure out what's wrong!